Airborne Transmission of a Serotype 4 Fowl Adenovirus in Chickens

Recently, we [1] showed that serum hepatitis B virus (HBV) DNA in HBV infected humanized mice exhibited a highly dynamic multiphasic kinetic pattern from infection initiation to steady state. Five of the 7 phases observed occurred within the first 8 days post-inoculation (p.i.) followed by an extended serum HBV DNA amplification phase before steady state was reached between 35–42 days p.i. Here, we examined whether the observed multiphasic HBV kinetic pattern is consistent among different HBV genotype C (GtC) clones and whether co-infection with the hepatitis D virus (HDV), which has been reported to suppress chronic HBV in humans [2] and humanized mice [3], might affect the observed HBV initiation kinetics.

2.1. Preparation of the Viral Inocula

Inocula consisted of serum from virus infected humanized mice. All sera containing HBV GtC were positive for HBs and HBe antigens with high-level HBV DNA. The inoculum containing PXB clone (AB246345) was obtained from HBV infected mice which were infected with serum from an HBV GtC infected patient in Nagoya City University. The inocula containing Hiroshima GtC CL4 clone (CL4 clone; MH887433) or Hiroshima GtC CL5 clone (CL5 clone; MH891502) were derived from HBV GtC infected patients at Hiroshima University. None of these clones contain any notable mutations.
The serum containing HDV genotype one was obtained from a patient at the National Institutes of Health (NIH). The serum was positive for HBs antigen with high-level HDV RNA, but HBV DNA was undetectable. The serum containing HDV was inoculated into humanized mice that were already infected with HBV CL4 to generate HBV/HDV superinfected mice with high titers of both HBV and HDV. Serum containing the equivalent titers of HBV and HDV was chosen as the inoculum for generating HBV/HDV co-infected mice (described in Experiment 4 below). All inocula were stored in liquid nitrogen until use.

RNA was extracted from serum samples using SepaGene RVR (EIDIA Co., Ltd., Tokyo, Japan) and reverse-transcribed with a random hexamer and a reverse transcriptase (ReverTraAce; TOYOBO, Osaka, Japan) according to manufacturers’ instructions. After the RT reaction, HDV cDNA was quantified by real-time PCR using the 7300 Real-Time PCR System (Applied Biosystems, Foster City, CA, USA). Amplification was performed in a 25 μL reaction containing 12.5 μL SYBR Green PCR Master Mix (Applied Biosystems), 5 pmol of forward primer, 5 pmol of reverse primer, and 1 μL of cDNA solution. After incubation for 2 min at 50 °C, the sample was denatured for 10 min at 95 °C, followed by a PCR cycling program consisting of 40 cycles of 15 s at 95 °C, 30 s at 55 °C, and 60 s at 60 °C. The lower quantitation limit of this assay is 5.0 Log copies/mL.

The HBV infection kinetics observed for HBV clones CL5 (Exp2) and CL4 (Exp3) were similar to that in PXB (Exp1), indicating reproducible kinetic patterns across all three HBV clones (Figure 1A). Interestingly, HDV co-infection also had no effect on the HBV kinetic pattern observed during the first 4 weeks (Figure 1A) with no significant difference in serum HBV levels at weeks 1, 2, 3, or 4 p.i. regardless of HBV clone or HDV co-infection (Figure 1B). However, HBV DNA levels at 6 weeks p.i. in HBV/HDV co-infected mice were significantly lower than those in HBV mono-infected mice (P = 0.002) (Figure 1B).
While both we (Figure 1) and others [3] have observed that HBV DNA levels are suppressed later in infection in the presence of HDV, the exact time of that suppression and relationship to HDV infection level is unclear. Specifically, the study by Giersch et al. [3] found that at 8 weeks, when mean HDV-RNA level reached 4.5 × 107 copies/mL, there was significantly higher innate signaling in their co-infected mice which corresponded with suppressed serum HBV DNA. In our study, despite the fact that HDV RNA levels had already reached 108 copies/mL by 4 weeks p.i., no suppression of serum HBV DNA was observed. In the absence of intracellular interferon stimulated genes or cytokines analysis, the lack of serum HBV DNA suppression in our co-infected mice at 4 weeks suggested that perhaps enhanced innate signaling was not yet present, and thus that peak innate signaling might be associated with the kinetics of infection rather than the absolute levels of HDV RNA at any specific time. Although host innate immune responses to viral infections are generally thought to occur rapidly, this highlights that some innate responses may need to be activated via inductions of several intracellular signal pathways [5], perhaps related to not only higher viral titers, but longer duration of infection.
This study has several limitations. First, while 26 mono-HBV infected mice were analyzed, only four HBV/HDV co-infected mice were investigated; thus it will be necessary to study more co-infected mice to independently verify the lack of difference in early kinetics between HBV mono-infected and HBV/HDV co-infected mice. Second, the sampling time points among the four experiments were not always identical because these experiments were originally designed independently (e.g., the comparison of HBV DNA levels at week three between mono- and co-infected mice (Figure 1B) were based on the data from only two mono-infection experiments).
Importantly, however, the sampling was frequent enough to allow comparison of kinetic patterns, and thus we were able to clearly observe the same reproducible multiphasic HBV infection initiation kinetic patterns (i.e. days 1–28 p.i.) independent of HBV clone and HDV co-infection. While delayed enhancement of HDV-induced innate signaling provides a reasonable explanation for why we observed no difference in early HBV infection kinetics between HBV mono-infected and HBV/HDV co-infected mice, this speculation, as well as the mechanistic-basis of the slow HDV-induced innate responses, warrants further investigation. 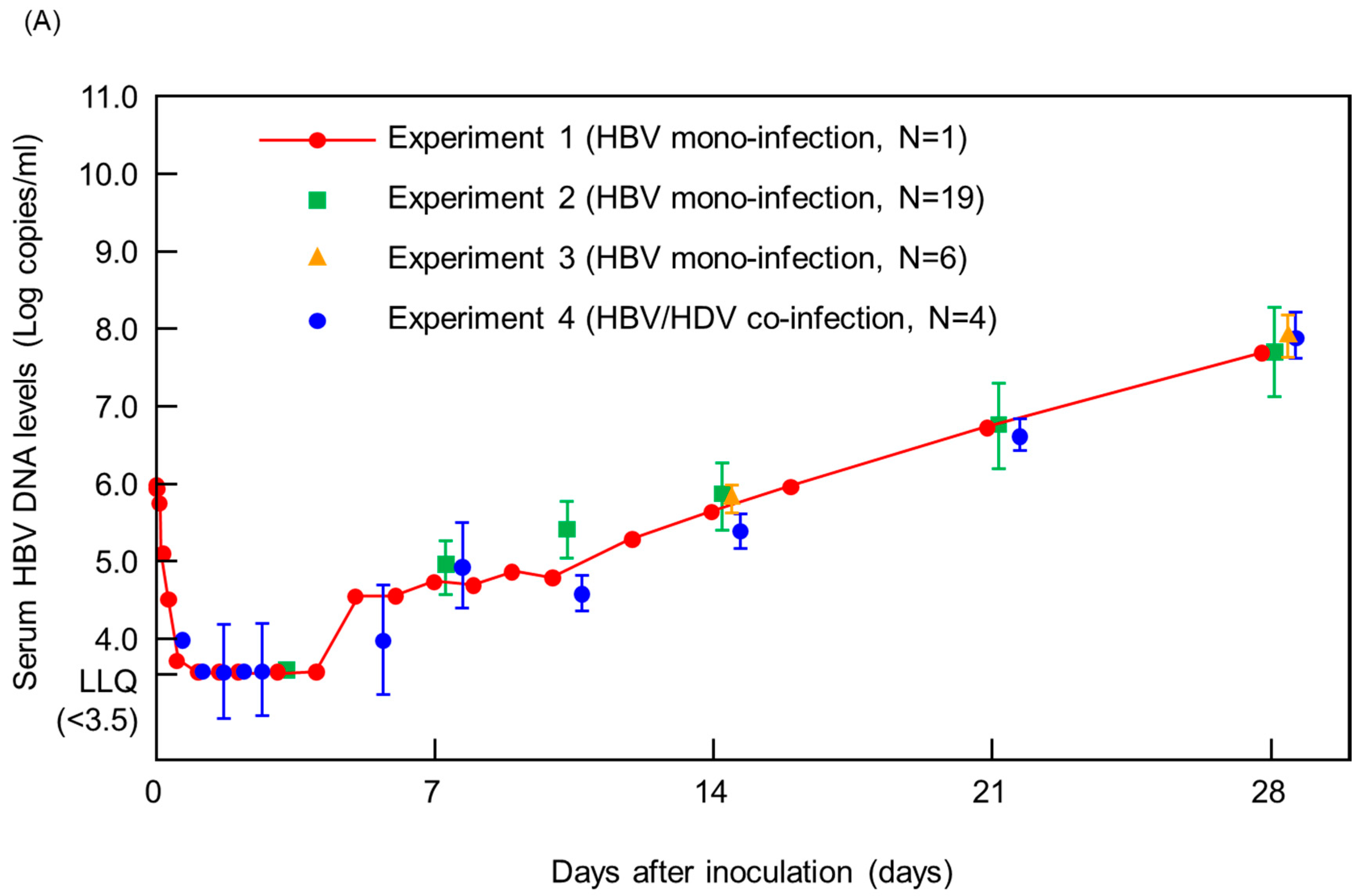