Discovery and Characterization of Bukakata orbivirus (Reoviridae:Orbivirus), a Novel Virus from a Ugandan Bat

While serological and virological evidence documents the exposure of bats to medically-important arboviruses, their role as reservoirs or amplifying hosts is less well-characterized. We describe a novel orbivirus (Reoviridae:Orbivirus) isolated from an Egyptian fruit bat (Rousettus aegyptiacus leachii) trapped in 2013 in Uganda and named Bukakata orbivirus. This is the fifth orbivirus isolated from a bat, however genetic information had previously only been available for one bat-associated orbivirus. We performed whole-genome sequencing on Bukakata orbivirus and three other bat-associated orbiviruses (Fomede, Ife, and Japanaut) to assess their phylogenetic relationship within the genus Orbivirus and develop hypotheses regarding potential arthropod vectors. Replication kinetics were assessed for Bukakata orbivirus in three different vertebrate cell lines. Lastly, qRT-PCR and nested PCR were used to determine the prevalence of Bukakata orbivirus RNA in archived samples from three populations of Egyptian fruit bats and one population of cave-associated soft ticks in Uganda. Complete coding sequences were obtained for all ten segments of Fomede, Ife, and Japanaut orbiviruses and for nine of the ten segments for Bukakata orbivirus. Phylogenetic analysis placed Bukakata and Fomede in the tick-borne orbivirus clade and Ife and Japanaut within the Culicoides/phlebotomine sandfly orbivirus clade. Further, Bukakata and Fomede appear to be serotypes of the Chobar Gorge virus species. Bukakata orbivirus replicated to high titers (106–107 PFU/mL) in Vero, BHK-21 [C-13], and R06E (Egyptian fruit bat) cells. Preliminary screening of archived bat and tick samples do not support Bukakata orbivirus presence in these collections, however additional testing is warranted given the phylogenetic associations observed. This study provided complete coding sequence for several bat-associated orbiviruses and in vitro characterization of a bat-associated orbivirus. Our results indicate that bats may play an important role in the epidemiology of viruses in the genus Orbivirus and further investigation is warranted into vector-host associations and ongoing surveillance efforts.
Keywords: arbovirus; bat; orbivirus; next-generation sequencing; surveillance; Reoviridae arbovirus; bat; orbivirus; next-generation sequencing; surveillance; Reoviridae

Serological and virological evidence documents the exposure of various East African bat species to several arboviruses including Rift Valley fever, dengue, and yellow fever virus [1,2], however, little is known about the potential role of bats as arbovirus reservoirs or potential amplifying hosts. Orbiviruses (Reoviridae:Orbivirus) are 10-segmented, dsRNA, vector-borne viruses that cluster phylogenetically by arthropod vector group [3]. Recent research has also reported a novel orbivirus that may represent the first recognized insect-specific virus in the genus Orbivirus [4]. While mostly recognized as veterinary pathogens (i.e., bluetongue virus, African horse sickness), several orbiviruses have been associated with neurologic disease in humans [5,6,7,8].
Prior to this study, four orbiviruses had been isolated from wild bats. Japanaut virus (JAPV) was isolated from the blood of a southern blossom bat (Syconycteris crassa) and a pool of mixed culicine mosquitoes in the Sepik District, New Guinea in 1965 [9,10]. Heramatsu orbivirus was isolated from the blood of an eastern long-fingered bat (Myotis macrodactylus) trapped in a mine in Heramatsu, Kagoshima, Japan in 1965 [11]. The genome of Heramatsu orbivirus (isolate KY-663) has been partially sequenced [12]. Eight isolates of Ife virus (IFEV) were isolated from the blood and organs of straw-colored fruit bats (Eidolon helvum) in Nigeria, Cameroon, and the Central African Republic in 1971 and 1974 [13]. Gambian pouched rats (Cricetomys gambianus), African grass rats (Arvicanthis niloticus), and domestic ruminants in Nigeria were also found to be seropositive for IFEV [14,15,16]. Fomede virus (FOMV) was isolated from the brain, liver, and spleen of a dwarf slit-faced bat (Nycteris nana) in Kindia, Guinea in 1978, and has been repeatedly isolated from Nycteridae bats in Guinea [17,18,19]. Additionally, serologic evidence exists for exposure of Bolivian bats (genera Myotis and Noctilio) to Matucare virus, an orbivirus isolated from Ornithodoros ticks in 1963 [20]. Australian fruit bats were found to be seropositive to Elsey virus, a serotype of the mosquito-borne Peruvian horse sickness virus [21].
In 2013, a novel orbivirus, tentatively named Bukakata orbivirus (BUKV), was isolated from an Egyptian fruit bat (Rousettus aegyptiacus leachii (A. Smith, 1829)) (ERB) captured in Kasokero Cave, Uganda (Figure 1). This is the fifth orbivirus isolated from bats; however, aside from partial sequencing of Heramatsu, no bat-associated orbivirus has been genetically characterized. The specific aims of this project were to 1) determine the genome sequence of the four bat-associated orbiviruses without published existing genetic information (JAPV, IFEV, FOMV, & BUKV) and conduct phylogenetic analyses to ascertain their potential arthropod associations, as orbiviruses cluster phylogenetically based on their arthropod vector, 2) determine the replication kinetics of BUKV in multiple vertebrate cell types, and 3) determine the prevalence of BUKV RNA in additional archived field samples from Uganda.

Bats were captured from multiple locations throughout Uganda during 2011–2013 [2]. Seventy-one additional combined liver and spleen tissue RNA samples from ERBs captured previously at Maramagambo Forest in 2009 were provided for inclusion in this study (Table 1, Figure 1). All bat captures were conducted under the approval of IACUC protocols 1731AMMULX (samples from Maramagambo Forest) and 010-015 (all other samples). Bats were captured using harp traps or mist nets. Sampling locations, numbers and species captured, and blood collection and serological results from these samples are described elsewhere [2,25]. All bats were euthanized according to approved IACUC protocols in accordance with AVMA guidelines to harvest tissues for virus isolations. Tissues collected included lung, intestine, liver, spleen, and oral and fecal swabs. Tissue sections were immediately placed in cryotubes and liquid nitrogen dry shippers. Duplicate aliquots of serum and liver/spleen were analyzed first for filovirus RNA at the CDC Viral Special Pathogens laboratory in Atlanta, GA USA.
Filovirus-negative liver and spleen specimens were homogenized for virus isolation. Approximately 0.5 cm3 sections of tissue were mechanically homogenized in a 2.0 mL snap cap tube containing 1 mL BA1 medium (Hanks M-199 salts, 0.05 M Tris pH 7.6, 1% bovine serum albumin, 0.35 g/L sodium bicarbonate, 100 U/mL streptomycin, 1 µg/mL Fungizone) and one or two stainless steel 5 mm beads in a Qiagen mixer mill (Qiagen, Valencia, CA, USA) at 25 cycles/sec for four minutes. Homogenates were clarified by centrifugation at approximately 12,800× g for 8 min at 4 °C and stored at −80 °C. A 100 µL aliquot of supernatant was inoculated directly onto Vero cell monolayers, with one sample per well on a 6-well plate for virus isolation by double-overlay plaque assay [26]. A second overlay containing neutral red was added four days post infection, and plates were observed for plaques up to 10 days post infection. Cells from plaque-positive wells were harvested into 1 mL DMEM + 10% fetal bovine serum and clarified by centrifugation and the infected supernatant was stored at −80 °C. The viral RNA from plaque-positive samples was extracted from 200 µL of the supernatant and eluted into a final volume of 140 µL AE buffer using the Qiagen BioRobot EZ1 Workstation using the EZ1 Virus Mini Kit v2.0. From the infected bat, additional sections of liver, lung, intestine, and oral and fecal swabs were also processed for virus isolation as above.

Confluent T-12.5 flasks of Vero cells, BHK-21 [C-13] cells, and R06E cells were inoculated with BUKV in triplicate at a MOI of 0.01. Triplicate mock-infected flasks served as negative controls. An additional flask for each cell line was prepared to count cells and ensure an accurate MOI calculation. Cells were allowed to incubate with virus for 60 min at 37 °C, and then washed with 1× phosphate buffered saline (PBS) three times prior to replacing maintenance media (DMEM with 2% FBS and 1% P/S for Vero cells and BHK-21 [C-13] cells, DMEM-F12 with 2% FBS and 1% P/S for R06E cells). Immediately, 100 µL was taken for the 0 h post-infection timepoint and proportion FBS was increased to 20% prior to freezing at −80 °C. Additional time points were collected at 12, 24, 48, 72, and 96 h post-infection. Back-titrations were performed in duplicate to confirm each inoculum was within two-fold of the desired titer. Viral quantification was assessed by plaque titration as previously described using Vero cell plaque assay [43].

Four days post-inoculation on Vero cells, plaques were visible for the spleen of bat #432 (UGA432, JCK8050, FMNH 223820) (Figure S1), a young male ERB captured in Kasokero cave in January 2013 (Table 1, Figure 1). Of the additional tissues harvested from the infected bat and tested for BUKV, only liver and spleen were positive for infectious virus by plaque assay; lung, oral and fecal swabs, and intestine were negative.

Complete coding sequences were obtained for all ten segments of FOMV, IFEV, and JAPV, and for all segments besides segment 3 of BUKV. Each segment possessed one gene encoding one protein, with the exception of segments 9 and 10, which each contained a second shorter ORF similar to other orbiviruses [45,46]. The size and GC% content for each ORF, in addition to its closest match to available data on GenBank using BLASTX (predicted translation product from six reading frames) and its GenBank accession number are listed in Table 2, Table 3, Table 4 and Table 5.

Amino-acid maximum-likelihood trees constructed in MEGA7 for VP1, T2, and T13 are provided (Figure 2, Figure 3 and Figure 4), as are nucleotide phylogenetic trees estimated using the MCMC method in MrBayes (Supplemental Figures S2–S4). Phylogenetic tree topology consistently places BUKV and FOMV viruses with the tick-borne orbiviruses and JAPV and IFEV with the Culicoides/sandfly-borne orbiviruses.
Pairwise distances generated in Geneious using MAFFT for both nucleotide and amino acids are listed for each of the four newly-sequenced orbiviruses in addition to the other previously-sequenced orbiviruses obtained from Genbank in Figure 5 (T2), Figure S5 (VP1), and Figure S6 (T13).

None of the 171 bat samples screened via qRT-PCR resulted in amplification of BUKV VP1 RNA, though six were suspected or weak positive. None of the six suspect-positive bat samples were confirmed positive for BUKV RNA by nested PCR. Of the 171 samples, GAPDH RNA was successfully amplified from 86% (147/171) confirming RNA integrity. Of the 513 tick pools tested, 16s rRNA internal extraction control was amplified from 485, and none were positive for BUKV VP1 RNA.

This study provided coding of the complete genome sequence on three bat-associated orbiviruses that have been discovered to date, and coding the complete sequence for nine of ten segments for a newly isolated bat-associated orbivirus. Further, in vitro replication kinetics were described in three vertebrate cell lines. From the phylogenetic analyses, inference regarding potential arthropod vector associations can be drawn regarding transmission of bat-associated orbiviruses and supports ticks as a potential vector of BUKV. While the archived bat and tick samples tested for BUKV RNA were negative, this study provides a strong framework for comprehensive viral characterization, including initial discovery, in vitro characterization, and the screening of samples collected from the potential vertebrate host and the purported invertebrate vector. The isolation of five orbiviruses from distinct bat species located across space and time and phylogenetically-associated with different arthropod vectors indicates a strong association between orbiviruses and bats, and further investigation into the public health impact of these orbiviruses is warranted.

This research was funded in part through an Interagency Agreement between the United States Agency for International Development Emerging Pandemic Threats Program, the United States Centers for Disease Control and Prevention, and Colorado State University. Supported by NIH/NCATS Colorado CTSA Grant Number TL1 TR002533. Contents are the authors’ sole responsibility and do not necessarily represent official NIH or CDC views.

We thank the Field Museum Department of Mammology for the donation of voucher material for molecular confirmation of the Rousettus bat species from Tutum cave. Godfrey Kyazze, David Ssekatawa, and Dennis Ssemwogerere served as drivers and managed equipment. Bat sampling was conducted under the permission of the Uganda Wildlife Authority (TDO/7/92/01), and CDC IACUC approval numbers (1731AMMULX; CDC/VSPB, Maramagambo samples) (10-015; CDC/DVBD, all other samples). Voucher UGA432/FMNH 223820 is currently archived at the Field Museum of Natural History in Chicago, IL, USA. We also thank Tom Okello Obong, Margret Driciru, and the Uganda Wildlife Authority rangers at the Python Cave.

No potential conflict of interest was reported by the authors. The findings and conclusions in this report are those of the authors only, and do not necessarily reflect the views of their respective institutions. 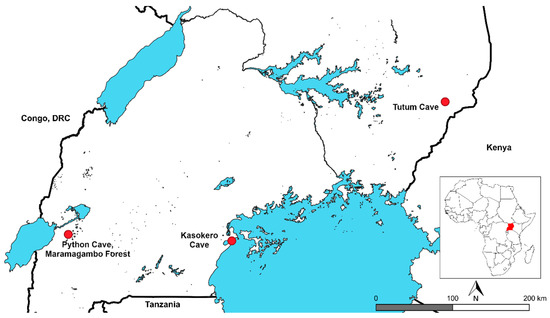 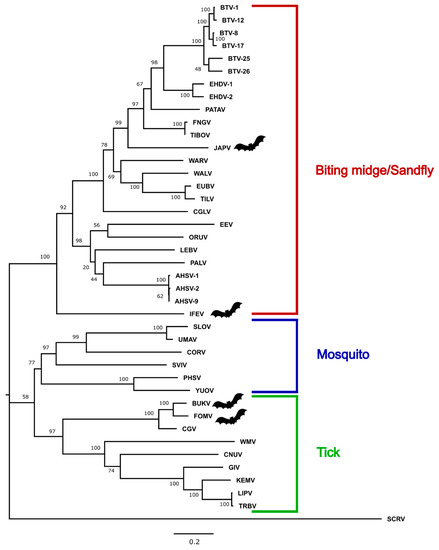 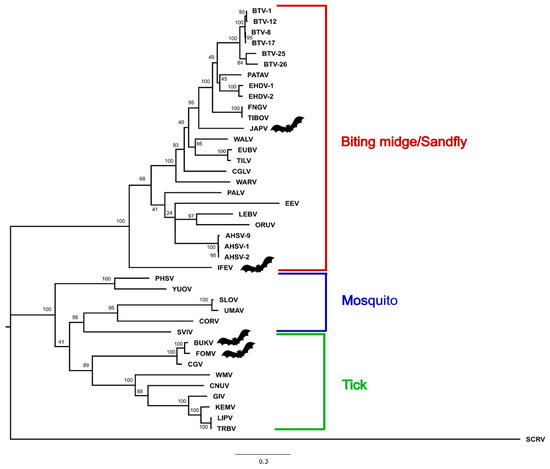 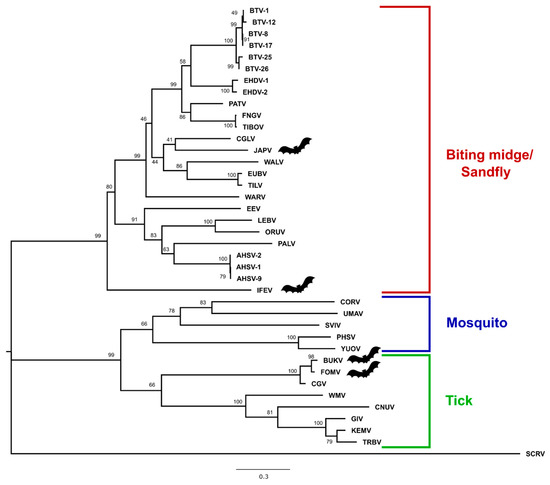