With the increasing pace of global warming, it is important to understand the role of meteorological factors in influenza virus (IV) epidemics. In this study, we investigated the impact of temperature, UV index, humidity, wind speed, atmospheric pressure, and precipitation on IV activity in Norway, Sweden, Finland, Estonia, Latvia and Lithuania during 2010–2018. Both correlation and machine learning analyses revealed that low temperature and UV indexes were the most predictive meteorological factors for IV epidemics in Northern Europe. Our in vitro experiments confirmed that low temperature and UV radiation preserved IV infectivity. Associations between these meteorological factors and IV activity could improve surveillance and promote development of accurate predictive models for future influenza outbreaks in the region.
Keywords: influenza; epidemics; weather; temperature; UV influenza; epidemics; weather; temperature; UV

Influenza A (H1N1 and H3N2 subtypes) and B (B/Yamagata and B/Victoria lineages) viruses (IVs) cause yearly epidemics with a substantial number of infected individuals requiring primary healthcare services and hospitalization [1,2]. Up to 650,000 people are estimated to die each year from IV infections [3].
It is now becoming evident that meteorological factors are associated with seasonality of IV epidemics [4,5]. Low temperature and low humidity have been shown to enhance IV transmissibility in temperate climates at high latitudes, whereas high humidity favors outbreaks in low latitudes in tropical and subtropical zones. In mid-latitudes, semiannual outbreaks result from alternating cool and rainy conditions [6,7,8,9,10,11]. Solar or UV radiation has also been suggested to have an influence on the seasonal influenza epidemics in temperate climates [12,13]. In fact, temperature, humidity, and UV radiation among other factors (genetic and social) may be valuable indicators to include in influenza surveillance for accurate prediction of future influenza outbreaks in different climate zones.
In this study, we explored the association between six meteorological factors (temperature, UV index, humidity, wind speed, precipitation, and pressure) and IV activity in Norway, Sweden, Finland, Estonia, Latvia and Lithuania during 2010–2018. In particular, we utilized correlation analysis and machine learning modeling as well as in vitro experiments to show that low temperature and UV indexes were the most predictive meteorological factors for high IV activity. Thus, our results highlighted an important role of temperature and UV index in influenza epidemics in Northern Europe.

To better understand the etiology of influenza epidemics in Norway, Sweden, Finland, Estonia, Latvia and Lithuania a “NorthernFlu” consortium was established in 2017. It consists of epidemiologists, clinicians and researchers from Norway, Sweden, Finland, Estonia, Latvia and Lithuania. The consortium aims to determine the impact of meteorological, societal, and genetic factors on IV stability and transmissibility and to improve prediction, prevention and treatment of severe IV infections.

The FluNet database provided weekly statistics of specimens positive for influenza viruses, whereas meteorological factor data were measured daily. Therefore, we adjusted each meteorological factor (median) per week.
In order to investigate the potential relationship between meteorological factors and influenza activity (number of IV positive specimens) in all analyzed countries, correlation analysis and machine learning based modeling were applied. The Pearson correlation coefficient (r) between each meteorological factor and influenza activity was calculated using the “stats” R package with a threshold of significance, p = 0.05.
For the machine learning modeling, Random Forest (RF) was optimized to find the most predictive meteorological factors of influenza activity. More specifically, for each country, the time-series measurements for all six meteorological factors were used as input features (explanatory variables) and the number of IV-positive specimens as an output variable for the model. The optimal Random Forest hyper-parameters, which are estimated from the data and used to train the most accurate model, were identified using Bayesian optimization (mlrMBO R-package, version: 1.1.1), with five times repeated 10-fold cross validation. The optimized RF model (with the lowest root-mean-square error (RMSE) from cross-validation) was used to estimate the contribution of each meteorological factor as a predictive performance of IV activity. This was done by random permutation of the measurements of one of the meteorological factors, while keeping measurements for all other factors constant, followed by estimation of the impact of this procedure on model accuracy (i.e., percentage mean decrease in accuracy). RF R-package version 4.6-14 was applied for the model training, with the following hyper-parameters used for optimization: Number of trees, number of randomly sampled features at each tree split (mtry), and minimum size of terminal nodes.
To find correlation between colder winters and increases in the number of influenza-positive specimens for six countries, we applied the Cox–Stuart statistical test. In particular, the median winter temperatures (2010–2018) were calculated by taking a median of daily temperatures between 1st of December and the 28th of February. Then, the median winter temperatures were ordered by the number of total IV-positive specimens for each country each year. A Cox–Stuart statistical test was applied to the ordered median winter temperatures to find any significant increasing or decreasing trends (threshold of significance was set to p = 0.05).

3.2. Temperature and UV Index Are the most Predictive Meteorological Factors of IV Epidemic in 2017–2018 in Northern Europe

We obtained daily statistics for six meteorological factors (temperature, UV index, humidity, wind speed, atmospheric pressure, and precipitation) from the web-interface of Weather Underground and operational Tropospheric Emission Monitoring Internet services for Norway, Sweden, Finland, Estonia, Latvia and Lithuania from 1 September 2017 to 31 August 2018 (Figures S1 and S2).
We analyzed correlation between each meteorological factor and IV activity to find significant associations and to measure the strength of linear association between variables using the Pearson correlation coefficient. As the correlation analysis does not always provide an accurate picture of cause and effect, especially in nonlinear systems, where interdependence between variables is complex, we validated our results by optimizing a machine learning Random Forest model. The model was optimized for each of the analyzed countries with an average explained variation of 71%.
Both correlation and machine learning analyses revealed that temperature was the most predictive meteorological factor of influenza activity in all six Northern European countries (Figure 2). UV index was the second most predictive in all countries, except Latvia. The humidity was the third most important factor associated with IV activity. Other meteorological factors, including wind speed, precipitation, and pressure showed low correlation with the peaks of IV activity and were not among the most predictive features of the machine learning Random Forest model.

3.3. Temperature and UV Index Are the Most Predictive Meteorological Factors of IV Epidemics in 2010–2017 in Northern Europe

Previous studies have shown that absolute humidity and temperature are major determinants of IV activity in temperate climates [7,20]. In this study, we used correlation and machine learning analyses to quantify the impact of six meteorological factors (temperature, UV index, humidity, wind speed, atmospheric pressure, and precipitation) on the IV activity in six Northern European countries (Norway, Sweden, Finland, Estonia, Latvia and Lithuania) during 2010–2018. We demonstrated that low temperature, UV indexes and humidity were associated with annual peaks of IV activity. Humidity was a less important predictor of IV activity compared to temperature and UV index. These results could be due to a statistical anomaly (UV and humidity were very close in their indices of association) or a specific phenomenon caused by the long and dark winters of Northern Europe.
Our experiments with UVB-, UVC- or temperature-exposed viruses showed that low temperature and UVB preserved infectivity of IV in vitro. It should be noted, that exposure to UVC radiation inactivated the virus. However, UVC, by contrast to UVB, is absorbed by atmosphere and, therefore, could not reach the earth surface and affect IV-host interaction.
Previous association studies showed that warmer winters could contribute to the decrease in IV activity in Europe and the US [21,22]. In particular, mild epidemics were associated with warm winters, which were followed by cold winters with severe IV outbreaks with early onset. It was proposed that fewer people were infected with influenza during warm winters, thereby leaving an unnaturally large fraction of susceptible individuals in the population going into the next season leading to early and severe epidemics. Our study does not support an association between warmer winters and a decrease in IV activity, because such a trend was observed only for two of six analyzed countries for the period from 2010 to 2018. Hence, there must be other factors such as host age and immune competence that influence IV activity, which are outside of the scope of this study.
It was shown that low winter temperatures correlated with both influenza incidence and global mortality, which mainly affected those aged 65 and older [21,23,24]. Low UV indexes could also be associated with global mortality. Indeed, data from six Northern European countries reported to the EuroMOMO project showed an excess mortality from all causes between the beginning of Januaries and the end of Februaries in 2010–2018, and coincided with IV epidemic peaks, low temperature and low UV indexes.

Inclusion of temperature, UV index and other meteorological parameters in IV surveillance systems could further our understanding of virus stability and transmissibility in the world, and help to develop accurate predictive models of influenza epidemics. Moreover, the combination of epidemiological, meteorological and genetic studies could unravel the evolution of influenza viruses and, consequently, improve early intervention and long-term control strategies of future influenza outbreaks.

This research was funded by the Estonian Research Council Mobilitas in addition to a top researcher grant (contract No. MOBTT3).

We gratefully acknowledge WHO, NICs, GISRS, NWS, PWS and TEMIS for data. 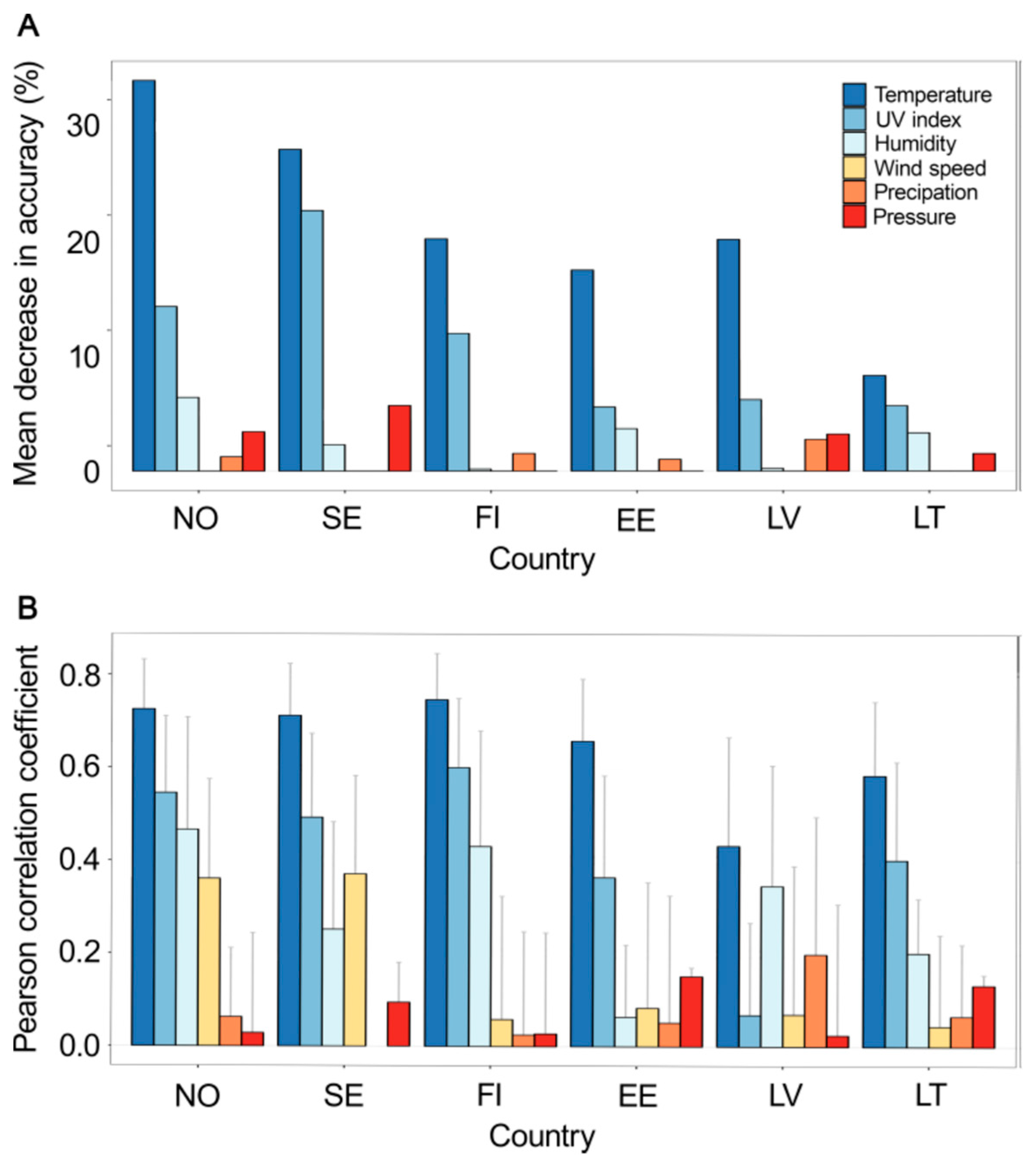 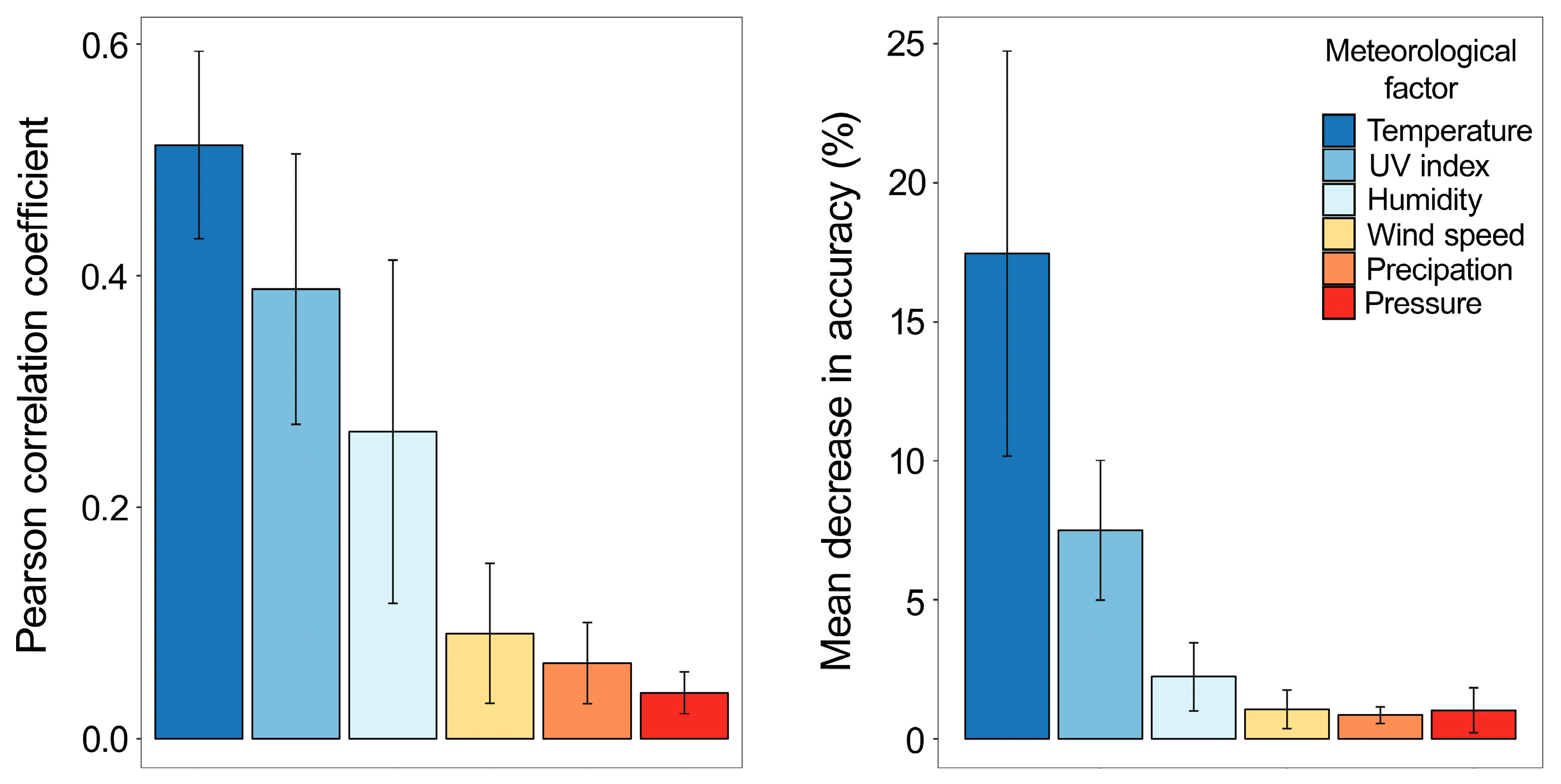