Influenza C virus (ICV) was first identified in humans and swine, but recently also in cattle, indicating a wider host range and potential threat to both the livestock industry and public health than was originally anticipated. The ICV hemagglutinin-esterase (HE) glycoprotein has multiple functions in the viral replication cycle and is the major determinant of antigenicity. Here, we developed a comparative approach integrating genetics, molecular selection analysis, and structural biology to identify the codon usage and adaptive evolution of ICV. We show that ICV can be classified into six lineages, consistent with previous studies. The HE gene has a low codon usage bias, which may facilitate ICV replication by reducing competition during evolution. Natural selection, dinucleotide composition, and mutation pressure shape the codon usage patterns of the ICV HE gene, with natural selection being the most important factor. Codon adaptation index (CAI) and relative codon deoptimization index (RCDI) analysis revealed that the greatest adaption of ICV was to humans, followed by cattle and swine. Additionally, similarity index (SiD) analysis revealed that swine exerted a stronger evolutionary pressure on ICV than humans, which is considered the primary reservoir. Furthermore, a similar tendency was also observed in the M gene. Of note, we found HE residues 176, 194, and 198 to be under positive selection, which may be the result of escape from antibody responses. Our study provides useful information on the genetic evolution of ICV from a new perspective that can help devise prevention and control strategies. View Full-Text
Keywords: Influenza C virus; hemagglutinin-esterase fusion glycoprotein (HE); codon usage bias; natural selection; selection pressure Influenza C virus; hemagglutinin-esterase fusion glycoprotein (HE); codon usage bias; natural selection; selection pressure
►▼ Show Figures 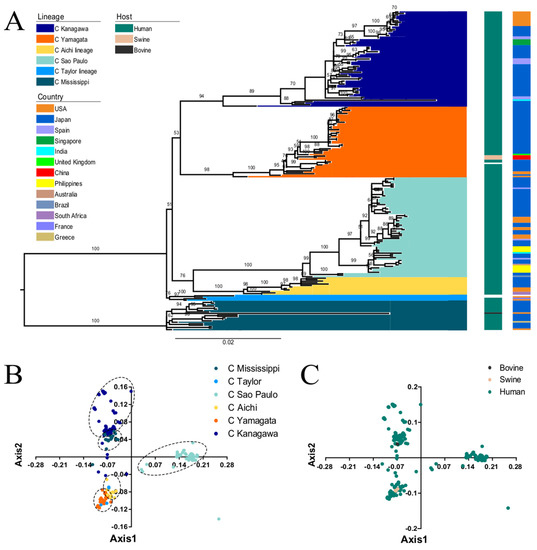