Dengue fever, chikungunya, and Zika are diseases caused by viruses transmitted by Aedes aegypti and Aedes albopictus. In Brazil, the number of human infections is high, but few studies are performed in mosquito vectors. This study aimed to investigate the presence of Zika, Dengue and Chikungunya viruses in Ae. aegypti and Ae. albopictus from the municipalities of Alto Alegre, Caxias, Codó, and São Mateus do Maranhão, located in the state of Maranhão, Northeast Brazil. The mosquitoes were collected with a mechanical aspirator, identified, triturated, and then submitted to RNA extraction and RT-qPCR. The positive samples were confirmed by virus isolation and genome sequencing. Three hundred and forty-eight Ae. aegypti (176 males and 172 females) and 12 Ae. albopictus (eight males and four females) were collected and tested. Ae. aegypti was the only vector positive in two municipalities—Codó, with detection of Chikungunya virus (CHIKV) belonging to the East-Central-South African genotype, and in Caxias, with detection of Dengue virus (DENV)-2 belonging to the Asian/American genotype. The detection of CHIKV and DENV-2 is evidence that those viruses are maintained in arthropod vectors, and shows the epidemiological risk in the area for chikungunya cases and a possible increase of severe dengue cases, associated with the occurrence of dengue hemorrhagic fever. View Full-Text
Keywords: Aedes; Chikungunya virus; Dengue virus; arbovirus Aedes; Chikungunya virus; Dengue virus; arbovirus
►▼ Show Figures 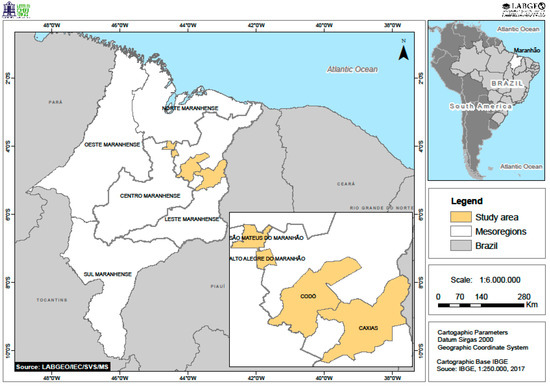