Interferon-mediated host factors myxovirus (Mx) proteins are key features in regulating influenza A virus (IAV) infections. Viral polymerases are essential for viral replication. The Mx1 protein has been known to interact with viral nucleoprotein (NP) and PB2, resulting in the influence of polymerase activity and providing interspecies restriction. The equine influenza virus has evolved as an independent lineage to influenza viruses from other species. We estimated the differences in antiviral activities between human MxA (huMxA) and equine Mx1 (eqMx1) against a broad range of IAV strains. We found that huMxA has antiviral potential against IAV strains from non-human species, whereas eqMx1 could only inhibit the polymerase activity of non-equine species. Here, we demonstrated that NP is the main target of eqMx1. Subsequently, we found adaptive mutations in the NP of strains A/equine/Jilin/1/1989 (H3N8JL89) and A/chicken/Zhejiang/DTID-ZJU01/2013 (H7N9ZJ13) that confer eqMx1 resistance and sensitivity respectively. A substantial reduction in Mx1 resistance was observed for the two mutations G34S and H52N in H3N8JL89 NP. Thus, eqMx1 is an important dynamic force in IAV nucleoprotein evolution. We, therefore, suggest that the amino acids responsible for Mx1 resistance should be regarded as a robust indicator for the pandemic potential of lately evolving IAVs. View Full-Text
Keywords: MxA; equine Mx1; influenza A viruses; polymerase activity; interspecies transmission; nucleoprotein; equine influenza MxA; equine Mx1; influenza A viruses; polymerase activity; interspecies transmission; nucleoprotein; equine influenza
►▼ Show Figures 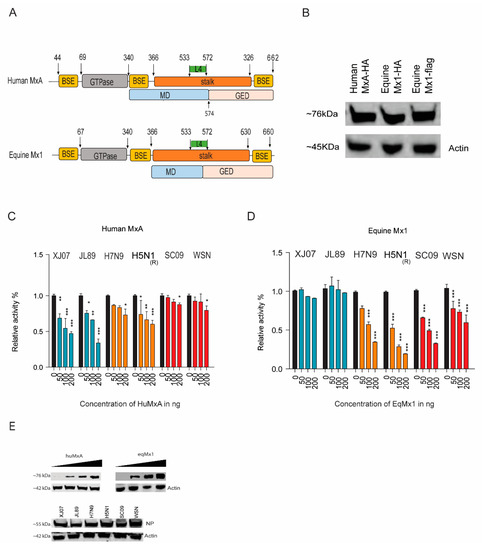