The emergence of phage-resistant mutants is a key aspect of lytic phages-bacteria interaction and the main driver for the co-evolution between both organisms. Here, we analyze the impact of PA5oct jumbo phage treatment on planktonic/cell line associated and sessile P. aeruginosa population. Besides its broad-spectrum activity and efficient bacteria reduction in both airway surface liquid (ASL) model, and biofilm matrix degradation, PA5oct appears to persist in most of phage-resistant clones. Indeed, a high percentage of resistance (20/30 clones) to PA5oct is accompanied by the presence of phage DNA within bacterial culture. Moreover, the maintenance of this phage in the bacterial population correlates with reduced P. aeruginosa virulence, coupled with a sensitization to innate immune mechanisms, and a significantly reduced growth rate. We observed rather unusual consequences of PA5oct infection causing an increased inflammatory response of monocytes to P. aeruginosa. This phenomenon, combined with the loss or modification of the phage receptor, makes most of the phage-resistant clones significantly less pathogenic in in vivo model. These findings provide new insights into the general knowledge of giant phages biology and the impact of their application in phage therapy. View Full-Text
Keywords: giant bacteriophage; Pseudomonas aeruginosa; biofilm; Airway Surface Liquid Infection model; phage-resistant mutants giant bacteriophage; Pseudomonas aeruginosa; biofilm; Airway Surface Liquid Infection model; phage-resistant mutants
►▼ Show Figures 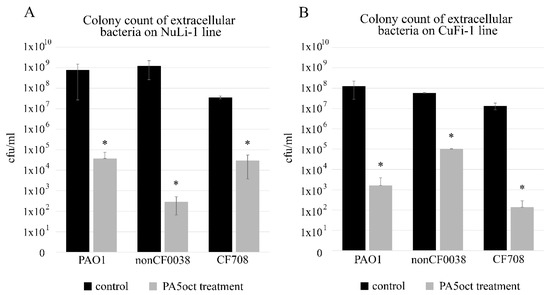