For the first 60 years following its isolation, Zika virus (ZIKV) remained a relatively poorly described member of the Flaviviridae family. However, since 2007, it has caused a series of increasingly severe outbreaks and is now associated with neurological symptoms such as Guillain-Barré syndrome and congenital Zika syndrome (CZS). A number of reports have improved our understanding of rare complications that may be associated with ZIKV infection in adults, the areas of the body to which it spreads, and viral persistence in various tissues. Likewise, studies on the effect of ZIKV infection during pregnancy have identified risk factors for CZS and the impact this syndrome has on early childhood. Understanding these outcomes and the factors that drive ZIKV pathogenesis are key to developing vaccination and therapeutic approaches to avoid these severe and potentially debilitating symptoms. View Full-Text
Keywords: Zika virus; pathogenesis; Guillain-Barré syndrome; fetal microcephaly; congenital Zika syndrome Zika virus; pathogenesis; Guillain-Barré syndrome; fetal microcephaly; congenital Zika syndrome
►▼ Show Figures 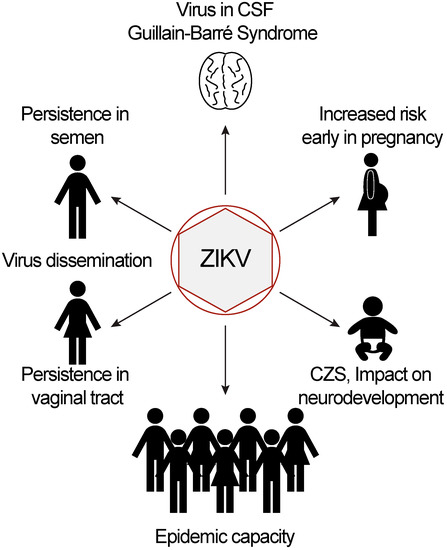