Staphylococcus aureus is one of the notable human pathogens that can be easily encountered in both dietary and clinical surroundings. Among various countermeasures, bacteriophage therapy is recognized as an alternative method for resolving the issue of antibiotic resistance. In the current study, bacteriophage CSA13 was isolated from a chicken, and subsequently, its morphology, physiology, and genomics were characterized. This Podoviridae phage displayed an extended host inhibition effect of up to 23 h of persistence. Its broad host spectrum included methicillin susceptible S. aureus (MSSA), methicillin resistant S. aureus (MRSA), local S. aureus isolates, as well as non-aureus staphylococci strains. Moreover, phage CSA13 could successfully remove over 78% and 93% of MSSA and MRSA biofilms in an experimental setting, respectively. Genomic analysis revealed a 17,034 bp chromosome containing 18 predicted open reading frames (ORFs) without tRNAs, representing a typical chromosomal structure of the staphylococcal Podoviridae family. The results presented here suggest that phage CSA13 can be applicable as an effective biocontrol agent against S. aureus. View Full-Text
Keywords: bacteriophage; Staphylococcus aureus; anti-biofilm; genome analysis bacteriophage; Staphylococcus aureus; anti-biofilm; genome analysis
►▼ Show Figures 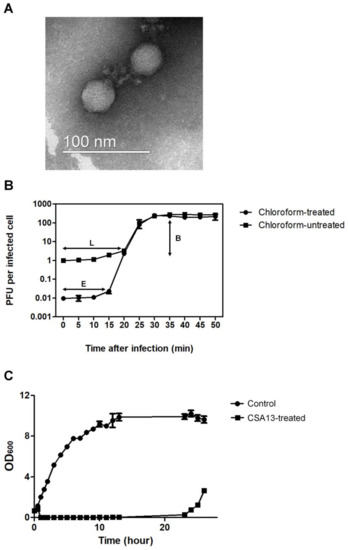