Background: Zika virus is a mosquito-borne flavivirus responsible for recent outbreaks of epidemic proportions in Latin America. Sexual transmission of the virus has been reported in 13 countries and may be an important route of infection. Sexual transmission of ZIKV has mostly been male-to-female, and persistence of viral RNA in semen for up to 370 days has been recorded. The susceptibility to ZIKV of different testicular cell types merits investigation. Methods: We infected primary Sertoli cells, a primary testicular fibroblast Hs1.Tes, and 2 seminoma cell lines SEM-1 and TCam-2 cells with ZIKV Paraiba and the prototype ZIKV MR766 to evaluate their susceptibility and to look for viral persistence. A human neuroblastoma cell line SK-N-SH served as a control cell type. Results: Both virus strains were able to replicate in all cell lines tested, but ZIKV MR766 attained higher titers. Initiation of viral persistence by ZIKV Paraiba was observed in Sertoli, Hs1.Tes, SEM-1 and TCam-2 cells, but was of limited duration due to delayed cell death. ZIKV MR766 persisted only in Hs1.Tes and Sertoli cells, and persistence was also limited. In contrast, SK-N-SH cells were killed by both ZIKV MR766 and ZIKV Paraiba and persistence could not be established in these cells. Conclusions: ZIKV prototype strain MR766 and the clinically relevant Paraiba strain replicated in several testicular cell types. Persistence of ZIKV MR766 was only observed in Hs1.Tes and Sertoli cells, but the persistence did not last more than 3 or 4 passages, respectively. ZIKV Paraiba persisted in TCam-2, Hs1.Tes, Sertoli and SEM-1 cells for up to 5 passages, depending on cell type. TCam-2 cells appeared to clear persistent infection by ZIKV Paraiba. View Full-Text
Keywords: flavivirus; Zika virus; viral persistence; testicular cells; testes flavivirus; Zika virus; viral persistence; testicular cells; testes
►▼ Show Figures 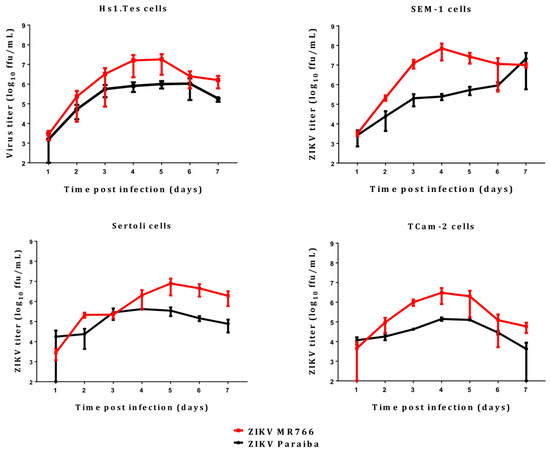