In the near past blueberry production was primarily concentrated in North America, with over 80% of world production in 2003 [1]. There were major expansions in production in North America in the 1990s and 2000s [2] but also worldwide; such that North America production accounted for less than 50% of world production in 2016 [3,4]. Approximately 655,000 metric tons of highbush blueberries were produced worldwide in 2016, a 16% increase from two years prior [4]. In the U.S. there was a 70% and 106% increase in acreage and production, respectively, from 2007 to 2016. Additionally, there were 206,500 metric tons of lowbush (wild) blueberries harvested in 2016 [4,5], which were produced primarily in Maine and eastern Canada. With the rapid increase in blueberry production worldwide, there is pressure on the nursery systems to increase production and plants are often being sourced from nurseries in other states, countries or continents resulting in increased international movement of planting material.
The movement of large volumes of vegetative plant material has inherent risks in terms of biosecurity [6,7]. Symptoms by many viruses vary by cultivar making visual inspections inadequate to assess plant health status. The 2016 APS Blueberry, Cranberry, and Lingonberry Compendium lists 13 viruses known to infect highbush blueberry [8]. Blueberry latent spherical virus has only been reported from Japan and was not included in the survey. Some of the viruses such as blueberry scorch virus (BlScV, [9]) can cause severe symptoms in some cultivars, whereas it remains symptomless or induce very mild symptoms in others. Blueberry mosaic associated virus (BlMaV, [10]) can be symptomless or develop very striking symptoms of yellow, pink and green mosaic on different branches of the same bush or an infected plant of the same cultivar may remain symptomless entirely. In the case of Blueberry virus A (BVA, [11]), the virus is symptomless in single infections but may be involved in a disease complex in Michigan [12,13] where plants infected with BVA exhibit a bronze leaf curl symptom.
There is an effort in the U.S. to harmonize blueberry certification programs (for more information visit ncpnberries.org), which has been the impetus for this study. For effective certification programs, understanding the viruses that pose the greatest risk for reinfection in nurseries can be used to develop best management practices. The objectives of this work were to identify the high risk blueberry viruses by production region in the North America and make this information available to regulators, and nursery managers. The outcome of such actions will be improved certification systems with higher quality plants that benefit fruit producers and consumers alike.

Samples were collected from the field randomly. They were brought back or shipped to the USDA-ARS Horticultural Crops Research Laboratory in Corvallis, Ore. or the Department of Plant Pathology at the University of Arkansas between 2015 and 2017. Areas of collection were the Pacific Northwest (Oregon and Washington in the U.S. and British Columbia, Canada), the Midwest (Michigan, Wisconsin), the Southeast (Arkansas, Florida, Georgia, and North Carolina), and the Northeast (New Jersey, New York, and Pennsylvania). All samples consisted of the youngest but fully expanded leaves

Total nucleic acids (TNA) were extracted from leaf samples using the buffers described previously [14,15]. Tissue was frozen with liquid nitrogen and then homogenized using a SPEX SamplePrep 2010 Geno/Grinder (Thomas Scientific, Swedesboro, NJ, USA) following the manufacturer’s recommended procedure. Once the tissue was powdered, 400 μL of extraction buffer [16] and 200 μL potassium acetate (3.8 M K, 5.8 M acetate) were added to each tube and mixed using the Geno/Grinder at 1200 rpm for 1 min. The plates were then centrifuged at 4000 rpm for 15 min and the supernatant used for total nucleic acid extraction using a MagMax Express 96 robot (Applied BioSystems, Foster City, CA, USA) according to manufacturer’s recommendations. Note that after the clarification step, all buffers were as recommended by the manufacturer. The purified nucleic acids were used immediately for downstream reactions or stored at −80 °C until use.

For ELISA, leaf samples were homogenized using a Pollähne roller press with buffer added to the rollers using a peristaltic pump. The grinding buffer used was that described in Martin and Bristow [17]. For BLMoV, PRMV, and TRSV, the ELISA testing was done using commercial kits (AGDIA Inc., Elkhart, IN, USA) according to the manufacturer’s recommendations with the exception of the grinding buffer, which was as described previously [17]. For BlScV, BlShV, and ToRSV, antibodies produced in-house and for BlSSV antibodies obtained from A.C. Schilder (Michigan State University, East Lansing, MI, USA) were used. A405 values were determined using the ELx808 plate reader (BioTek U.S., Winooski, VT, USA). Samples were considered positive if the absorbance values were three times or greater than that obtained in wells loaded with buffer rather than leaf sap.

Blueberry fruit drop associated virus (BFDaV), blueberry latent virus (BlLV), blueberry mosaic associated virus (BlMaV), blueberry necrotic ring blotch virus (BNRBV), blueberry red ringspot virus (BRRV), blueberry virus A (BVA), and as well as an internal control standard [15] were tested by RT-PCR whereas blueberry red ringspot virus was detected by PCR. The primer pairs, annealing temperatures, and expected amplicon sizes for the PCR reactions are listed in Table 1.
Reverse transcription reactions (50 μL) consisted of 50 mM Tris acetate (pH 8.4), 75 mM potassium acetate, 8 mM magnesium acetate, 20 mM DTT, 0.4 mM dNTPs, 0.3 μg random primers, and 60 U Maxima reverse transcriptase (Thermo Fisher Scientific, Waltham, MA, USA). The solution was vortexed, centrifuged briefly, incubated at room temperature for 2 min, and then 50 °C for 60 min. The reactions were terminated by 5 min incubation at 85 °C. The cDNA constituted 10% of the total PCR volume. Before virus detection, all samples were evaluated for quality of the RNA by carrying out amplification of the NADH dehydrogenase ND-2 subunit as described [15]. Virus-specific PCR reactions (Table 1) were carried out using a program consisting of an initial denaturation for 5 min at 94 °C followed by 40 cycles with denaturation for 30 s at 94 °C, annealing for 30 s at 53–58 °C depending on the primers (Table 1) and extension for 60 s at 72 °C, with a final 10 min extension step at 72 °C. Green Taq DNA polymerase (GenScript, Piscataway Township, NJ, USA) was used according to the manufacturer’s recommendation for all PCR reactions. Amplification products were resolved by electrophoresis through a 2% agarose gel containing ethidium bromide. Representative amplicons for each virus were sequenced to confirm their identity. In the case of BFDaV, all amplicons were sequenced since it was only reported in one county in northwest Washington and in British Columbia, Canada.

The authors declare no conflict of interest. The funding sponsors had no role in the design of the study; in the collection, analyses, or interpretation of data; in the writing of the manuscript, or in the decision to publish the results. 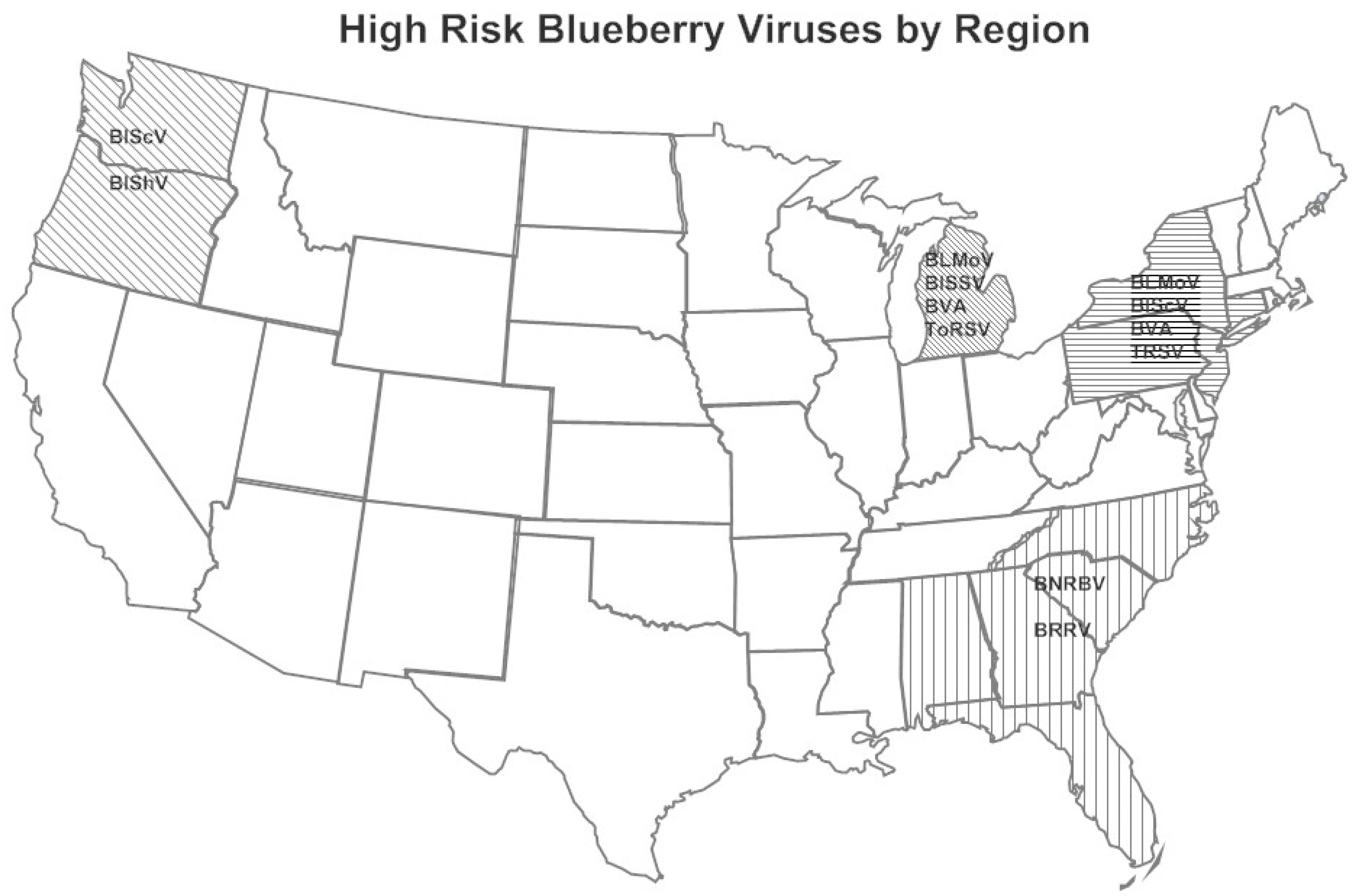