Strawberry vein banding virus (SVBV) is an important plant virus infecting strawberries. SVBV is now widely distributed in many countries worldwide, including Australia, Japan, multiple European countries, The United States of America, and China, and causes severe loss of strawberry production [1,2,3]. SVBV is known to be transmitted by several aphid species, including Chaetosiphon sp., in a semi-persistent manner [4]. Symptoms of SVBV infection in strawberry (Fragaria×ananassa cv. Sachinoka) plants are mainly retarded plant growth and fewer numbers of creeping stems [5]. The woodland strawberry (Fragaria vesca) is a diploid wild strawberry species that has been used as an indicator plant of SVBV infection assays. Symptoms of SVBV-infected F. vesca plants are mainly chlorosis along the leaf veins and lobular distortion [6]. When F. vesca plants are mix-infected with SVBV and Strawberry crinkle virus (SCV), Strawberry mottle virus (SMoV), Strawberry mild yellow edge virus (SMYEV), or Strawberry latent ring spot virus (SLRSV), the infected plants often show leaf distortion, chlorosis, plant stunting, and fruit yield reduction [7,8].
SVBV is a member of the genus Caulimovirus, family Caulimoviridae. The SVBV genome is a double-stranded DNA (dsDNA) with about 8000 nucleotides [9]. SVBV genomic DNA has seven open reading frames (ORFs) and shares similar genome structure with Cauliflower mosaic virus (CaMV) (Figure 1A) [5]. The CaMV ORF VI-encoded P6 protein was reported as a multifunctional protein [10]. For example, CaMV P6 can function as an RNA silencing suppressor, and is the main component of CaMV inclusion bodies [11,12]. It is also known to be a disease symptom and host range determinant [13]. In addition, P6 was reported to act as a trans-activator, to interact with eukaryotic cell translation initiation factors eIF3g, L18, and L24 proteins of the 60S ribosomal subunit, and to specifically control the synthesis of downstream proteins from CaMV 35S RNA [14]. Finally, the CaMV P6 protein was also shown to regulate the expression of multiple genes in its host plants [15]. In our previous studies, the SVBV P6 protein had also been identified as an RNA silencing suppressor, which could effectively enhance the expression of the exogenous GFP gene Nicotiana benthamiana [11].
Translation in eukaryotic cells begins with the 43S ribosomal complex, which includes a 40S ribosome small subunit, eIF1, eIF1A, eIF3, and eIF2/GTP/Met/tRNA complex. The 43S ribosomal complex starts to scan and recognize the 5′-untranslated region of mRNA. After recognizing the initiating codon of the first ORF, the 43S and 60S ribosomal subunits assemble to form 80S ribosomes and to initiate RNA translation [16]. The translation initiation process for plant virus proteins is relatively simple. In order to achieve efficient virus replication and virion assembly in host cells, the virus generally needs to regulate the transcription and translation of its various ORFs by two main strategies. One strategy is cis-regulation, which needs cis-acting elements such as promoters and enhancers that are directly important for the expressions of their own and other functional genomes [17]. The other strategy is trans-regulation, which regulates the expressions of multiple virus proteins through its transcription or translation products such as the trans-activate protein (TAV). The expression of host related proteins can also be regulated to be convenient for virus replication and assembly [18]. The ribosome initiation mechanism is also used by viruses to control viral RNA translation. After sliding through the termination codon of the previous ORF, the ribosome continues to translate the next gene by forming a complex with the viral TAV and other necessary translation co-factors [19].
The ribosome translation initiation mechanism has been reported for multiple plant viruses in the family Caulimoviridae, these being CaMV, Figwort mosaic virus (FMV), and Peanut leaf streak virus (PCSV) [20,21]. CaMV35S RNA translation can be re-initiated via two different mechanisms. First, the ribosome re-initiates ORF VII translation through a diversion mechanism until the synthesis of 35S RNA leader sRNA is completed, and the translation efficiency can be enhanced by 2–3 fold in the presence of a TAV [22]. Second, CaMV transcribes 19S RNA and 35S RNA from its genomic DNA using RNA polymerase II. The 19S RNA contains only the ORF VI region and produces a TAV protein (also known as the P6 protein) [23]. SVBV 35S RNA is a polycistron RNA and encodes five proteins (i.e., P1, P2, P3, P4, and P5) from the ORF I, II, III, IV, and V. The P6 protein is a highly expressed protein and accumulates in the cytoplasm, forming cellular inclusion-like granules [24]. CaMV P6 can also interact with the 60S polyribosome subunit proteins L18, L24, eukaryotic initiation factor eIF3g, and re-initiation scaffolding proteins (RISP) to form complexes [25] to translate viral 35S polycistron RNA continuously [26].
In this study, we show that the SVBV-encoded P6 protein is the only TAV of the virus and can trans-activate the translation of downstream cistrons, as well as the expression of GFP from various vectors carrying different caulimovirus promoters and bicistrons. In addition, the P6 protein encoded by SVBV expressed from an infectious clone could also trans-activate the translation of bicistrons. The FveIF3g protein of F. vesca could interact with the P6 protein in nuclei, interfere with the formation of P6 granules in plant cells, and inhibit the trans-activation activity of P6. Our findings revealed a potential molecular mechanism controlling the translation of viral polycistron RNA assisted by the P6 protein. Furthermore, the findings provided a direction for future research on double stranded DNA (dsDNA) virus replication and translation.

N. benthamiana plants were grown inside an insect-free growth chamber set at 25 °C and a 16/8 h (light/dark) photoperiod. Plants at the 4–6 leaf stage were used for the experiments.

Agrobacterium tumefaciens was transformed with the individual constructs described above and grown overnight in the YEP medium containing the appropriate antibiotics. A. tumefaciens cultures were pelleted and then resuspended individually in an infiltration buffer [10 mM MgCl2, 10 mM 2-(N-Morpholino) ethane sulfonic acid (MES), and 100 μM acetosyringone]. Individual A. tumefaciens cultures were adjusted to OD600 = 1.2, or as indicated otherwise, and then mixed with the infiltration buffer by 1 to 1 volume for 3 h in dark conditions. The mixed A. tumefaciens suspension co-infiltrated into leaves of 7–8 leaf stage N. benthamiana plants using 1 mL needleless syringes. The agro-infiltrated leaves were examined for GFP expression under a hand-held 100 W, long-wave UV lamp (UV Products, Upland, CA, USA). The infiltrated leaves were photographed with a Canon EOS 700 D digital camera (Canon, Taiwan, China) with an Y48 yellow filter.

N. benthamiana leaves were infiltrated with A. tumefaciens cultures harboring specific combinations of constructs. At 70 h post agro-infiltration (hapi), a leaf disc (1.0 cm2) was taken from an infiltrated leaf and examined under an OLYMPUS FluoView™ FV1000 confocal microscope (OLYMPUS, Tokyo, Japan). GFP fusion proteins were excited at 488 nm and the emitted signal was captured at 510 nm. In this study, 4,6-Diamidino-2-phenylindole (DAPI) (Sigma-Aldrich, St. Louis, MO, USA) was used to stain the nuclei in cells. All captured images were processed using the Adobe Photoshop software.

The total protein was extracted from A. tumefaciens infiltrated leaf samples using the RIPA lysis buffer II (0.5g tissue/mL buffer) as instructed (Sangon Biotech, Shanghai, China). The extracts were centrifuged at 10,000 g for 5 min at 4 °C and the supernatant from each sample was collected. For Western blot assays, the total protein in each supernatant was separated in 10 % SDS-PAGE gels. After transferring protein bands to nitrocellulose membranes, the membranes were probed with a mouse anti-GFP monoclonal or a rabbit anti-P6 polyclonal antibody followed by an HRP-labeled goat anti-mouse IgG or anti-rabbit IgG antibody. Detection signal was visualized using the EasySee Western Blot Kit (TransGen Biotech, Beijing, China).

Interactions between P6 and FveIF3g, P6 and FvL18 or P6 and FvL24 were analyzed through Yeast two-hybrid (Y2H) assay as instructed by the manufacturer (Clontech, Mountain View, CA, USA). The yeast strain Y2H Gold was co-transformed with the pGAD- and pGBK-vectors and grown on an SD-Leu-Trp selective dropout medium for about 48 h in 28 °C. The selected positive colonies were transferred onto the SD/-Ade/-His/-Leu/-Trp plates and incubated at 28 °C for 72 h. For bimolecular fluorescence complementation (BiFC) assays, N. benthamiana leaves were co-infiltrated with A. tumefaciens cultures harboring YFPN- and YFPC-vectors using needless syringes. The agro-infiltrated N. benthamiana leaves were examined and photographed under the confocal microscope as described above.

3.1. SVBV P6 is a Trans-Activator of RNA Translation

3.2. P6 Can Trans-Activate the Translation of the gfp RNA from Different Bicistrons

3.3. P6 Can Trans-Activate the Translation of gfp mRNA in Bicistrons Expressed Through a Heterozygous Promoter

3.4. P6 Protein Encoded by SVBV Can Also Trans-Activate the Translation of gfp mRNA

3.5. P6 Protein Can Interact with FveIF3g of F. vesca Both In Vitro and In Vivo

According to previous studies [25], we hypothesized that strawberry polyribosome subunit proteins L18, L24, and initiation factor eIF3g may have roles in the trans-activated translation of SVBV 35S RNA by the P6 protein. F. vesca FvL18, FvL24, and FveIF3g genes were individually cloned into Y2H vectors and then tested for the possible interactions between SVBV P6 and one of the three F. vesca proteins through Y2H assays. Results showed that the P6 protein did interact with FveIF3g but not with FvL18 or FvL24 (Figure 5A). Interaction between the P6 and FveIF3g proteins was also confirmed by BiFC in N. benthamiana leaves (Figure 5B). When N. benthamiana leaves were co-infiltrated with vectors expressing FveIF3g-mcherry or P6-GFP, red fluorescence from FveIF3g-mcherry and green fluorescence from P6-GFP were found to be co-localized in the infiltrated cells at 70 hpai (Figure 5C), suggesting that FveIF3g could interact with the SVBV P6 protein in vivo. 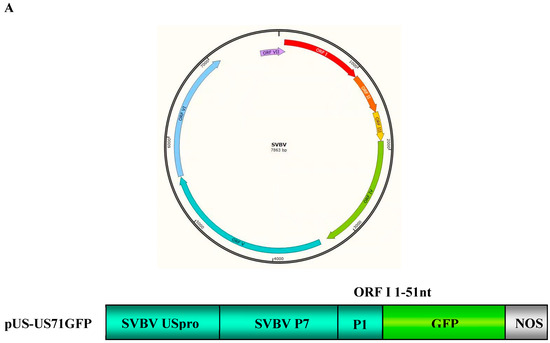 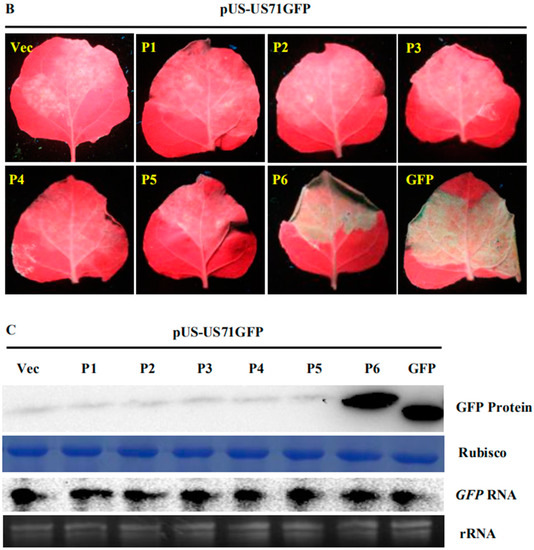 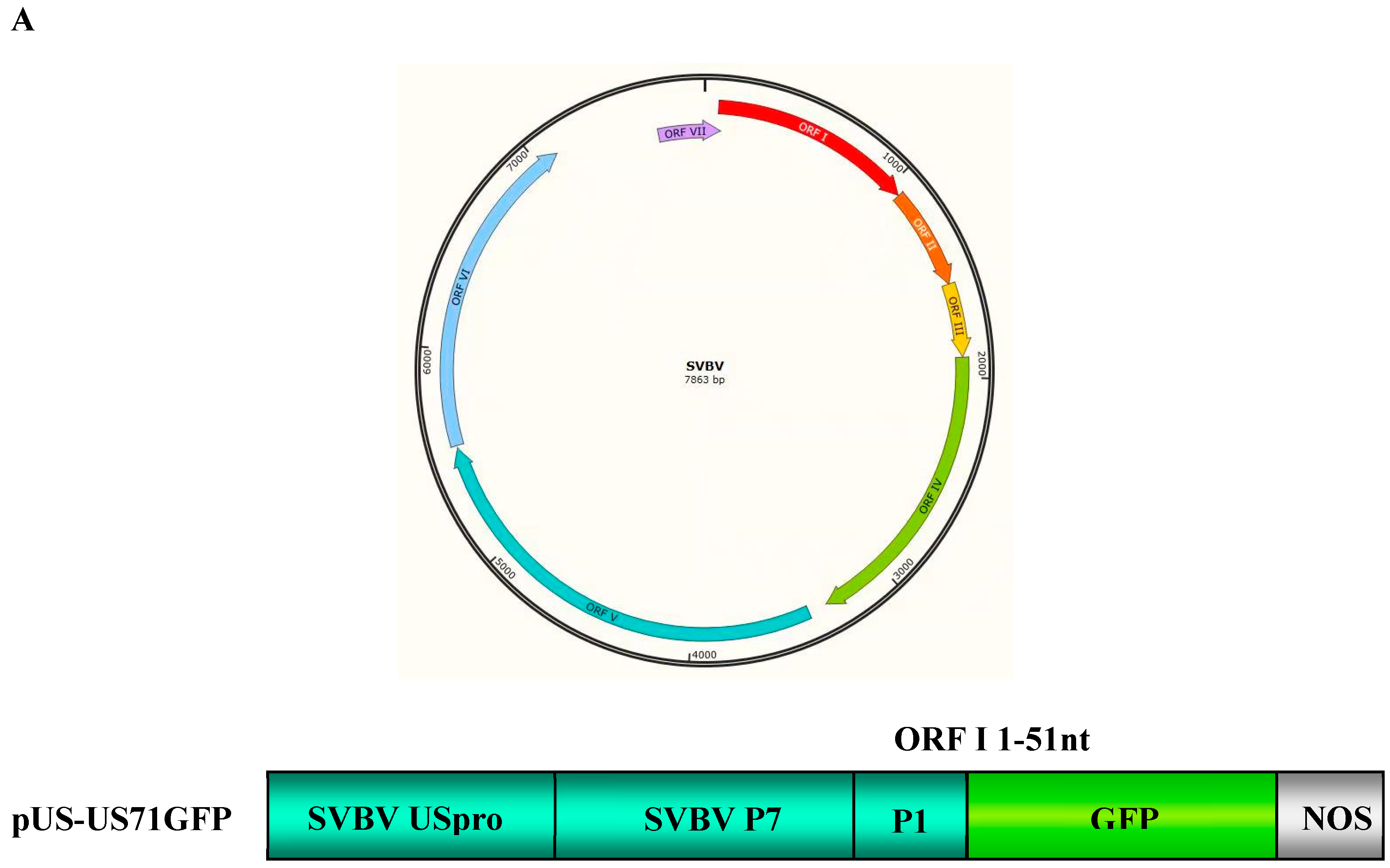 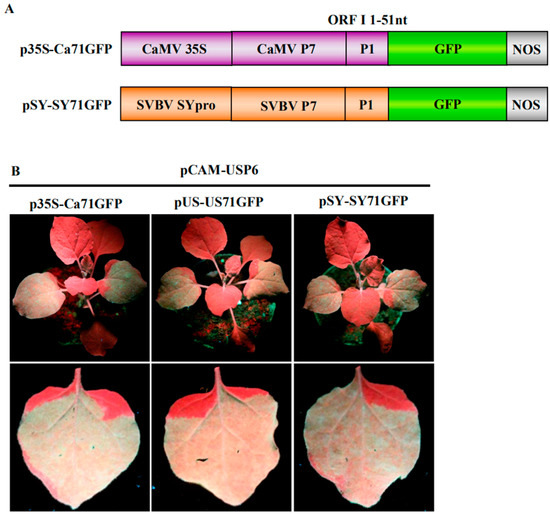 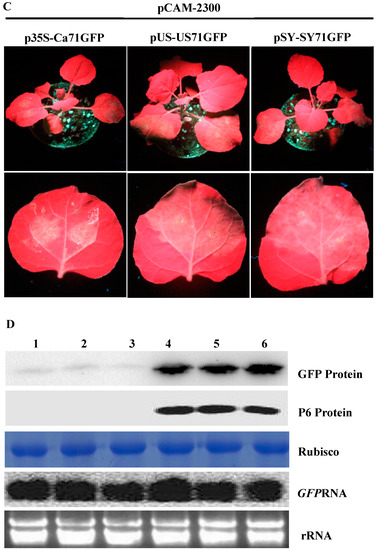 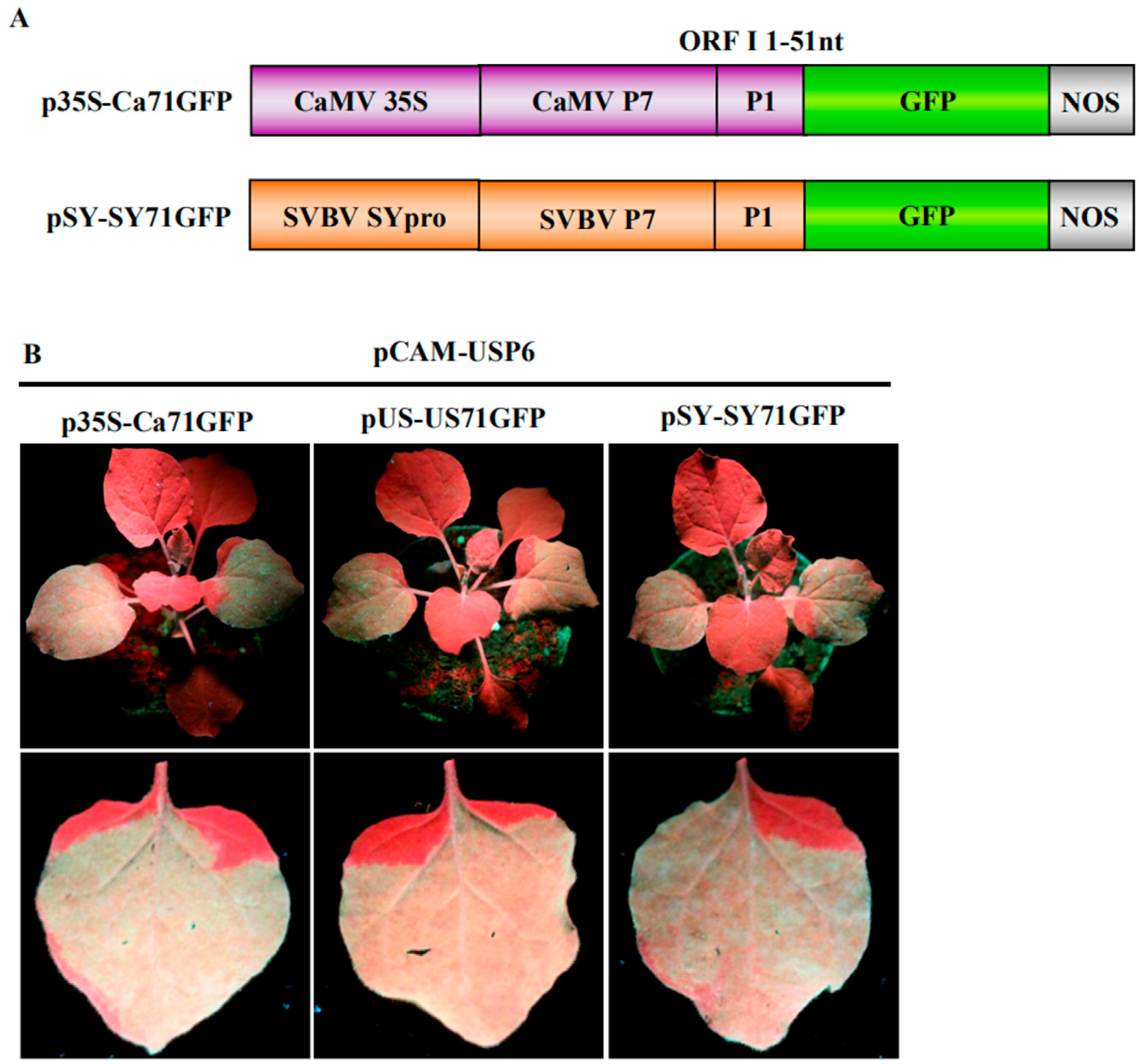 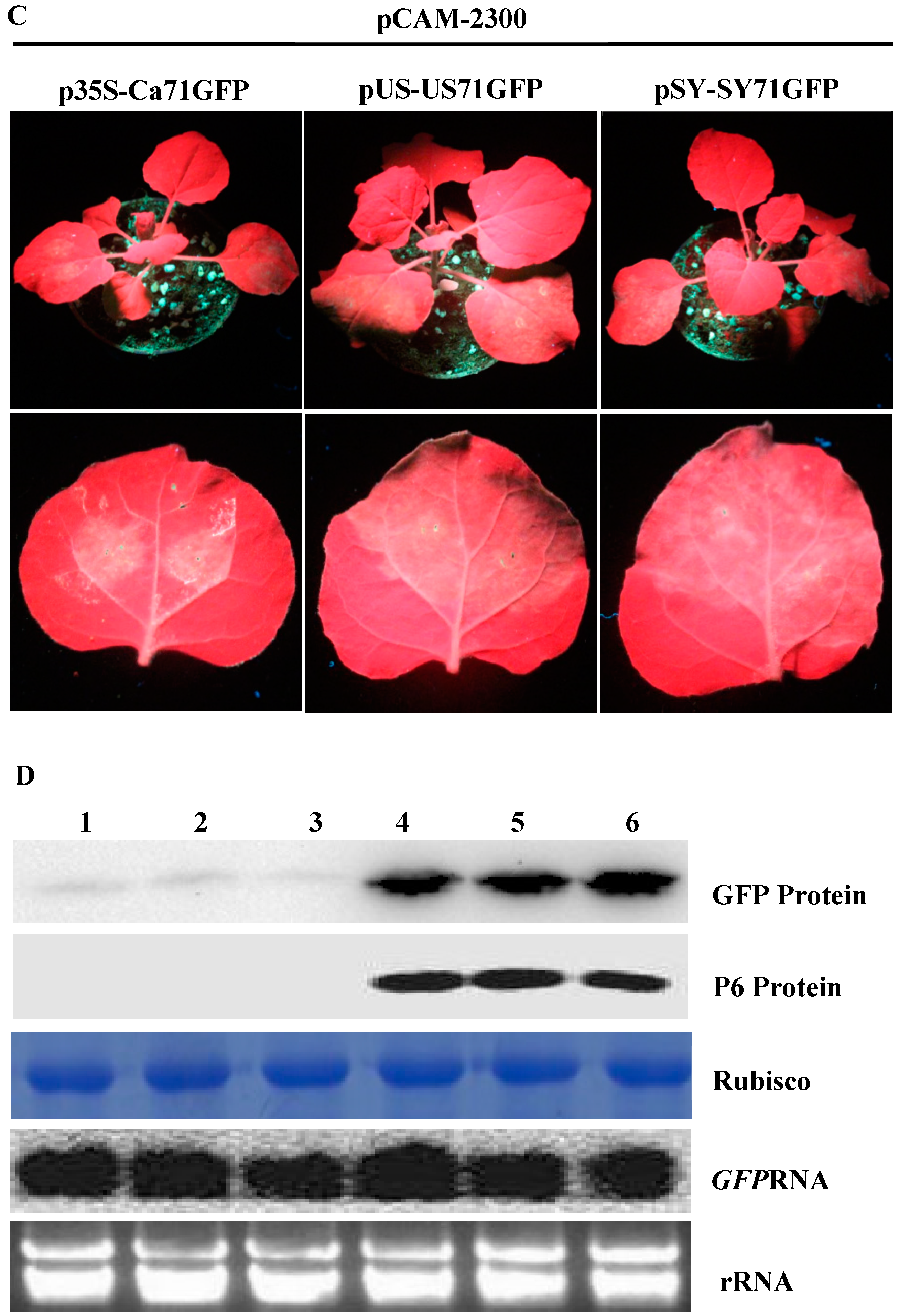 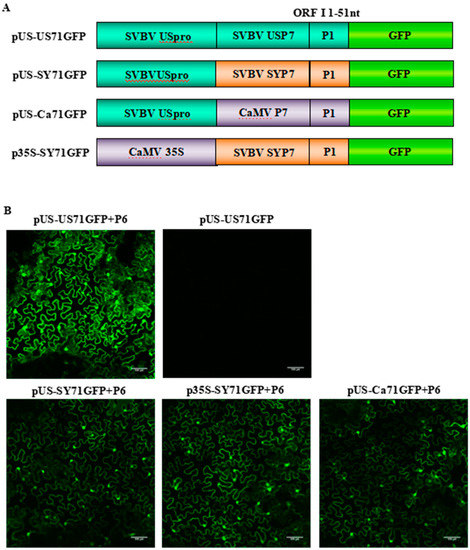 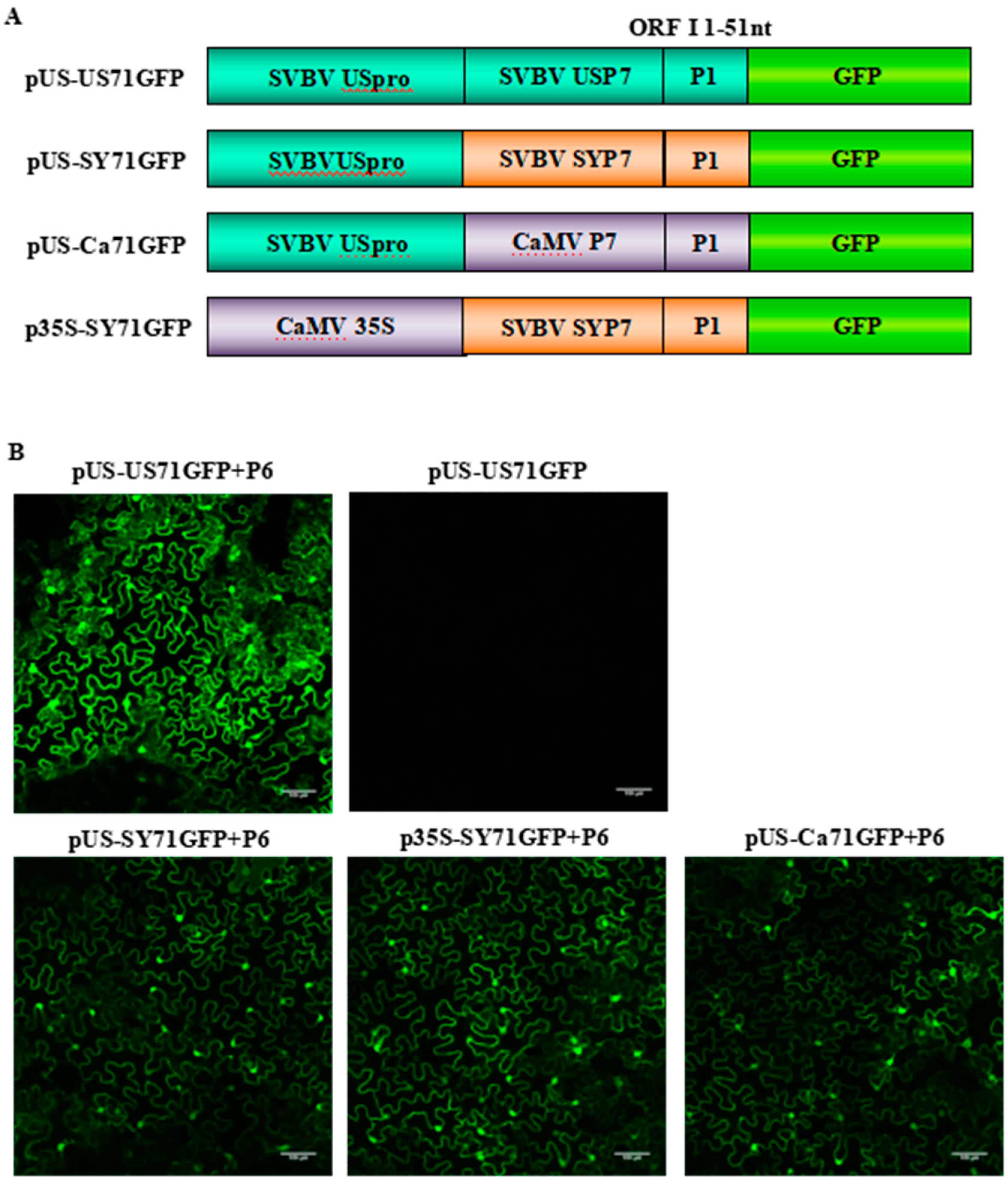 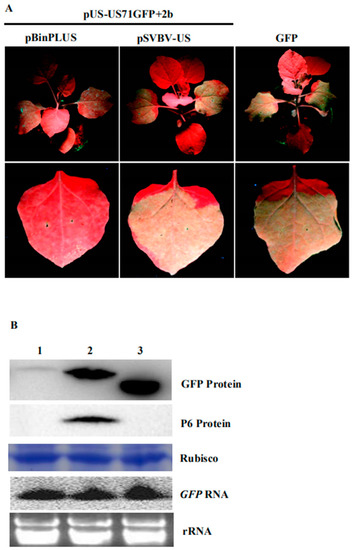 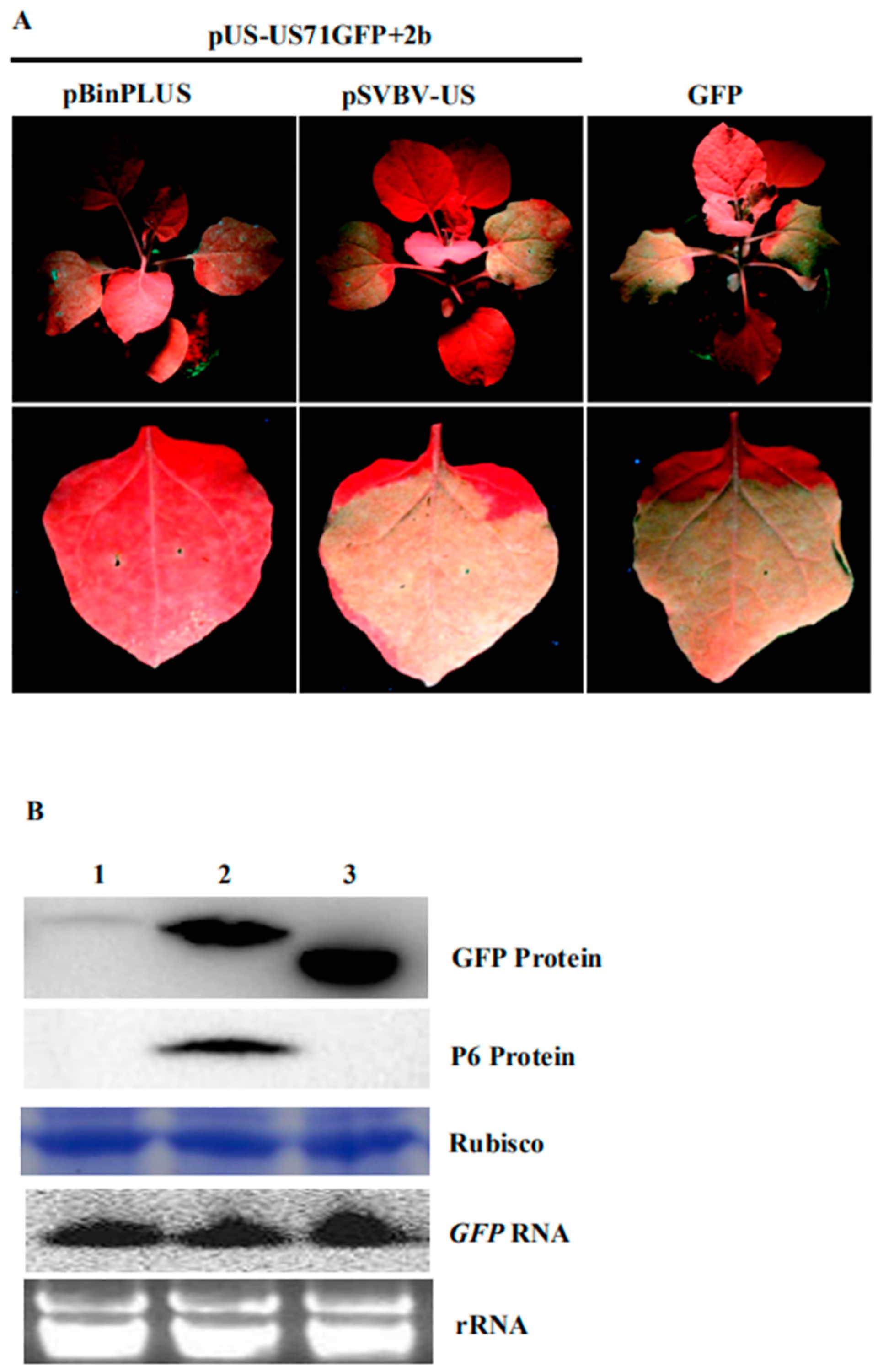 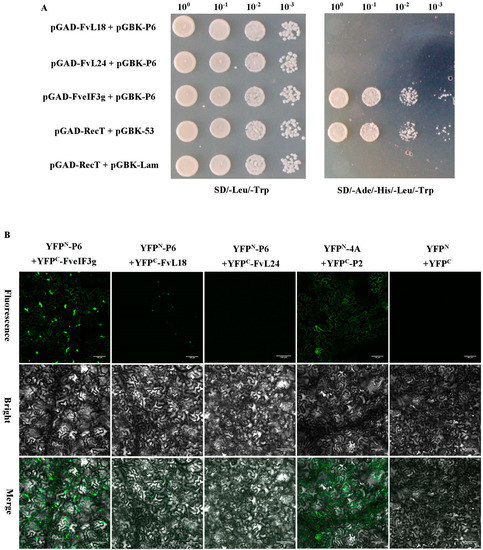 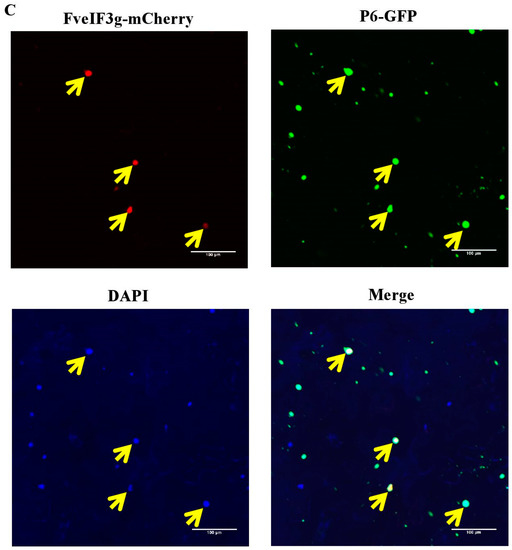 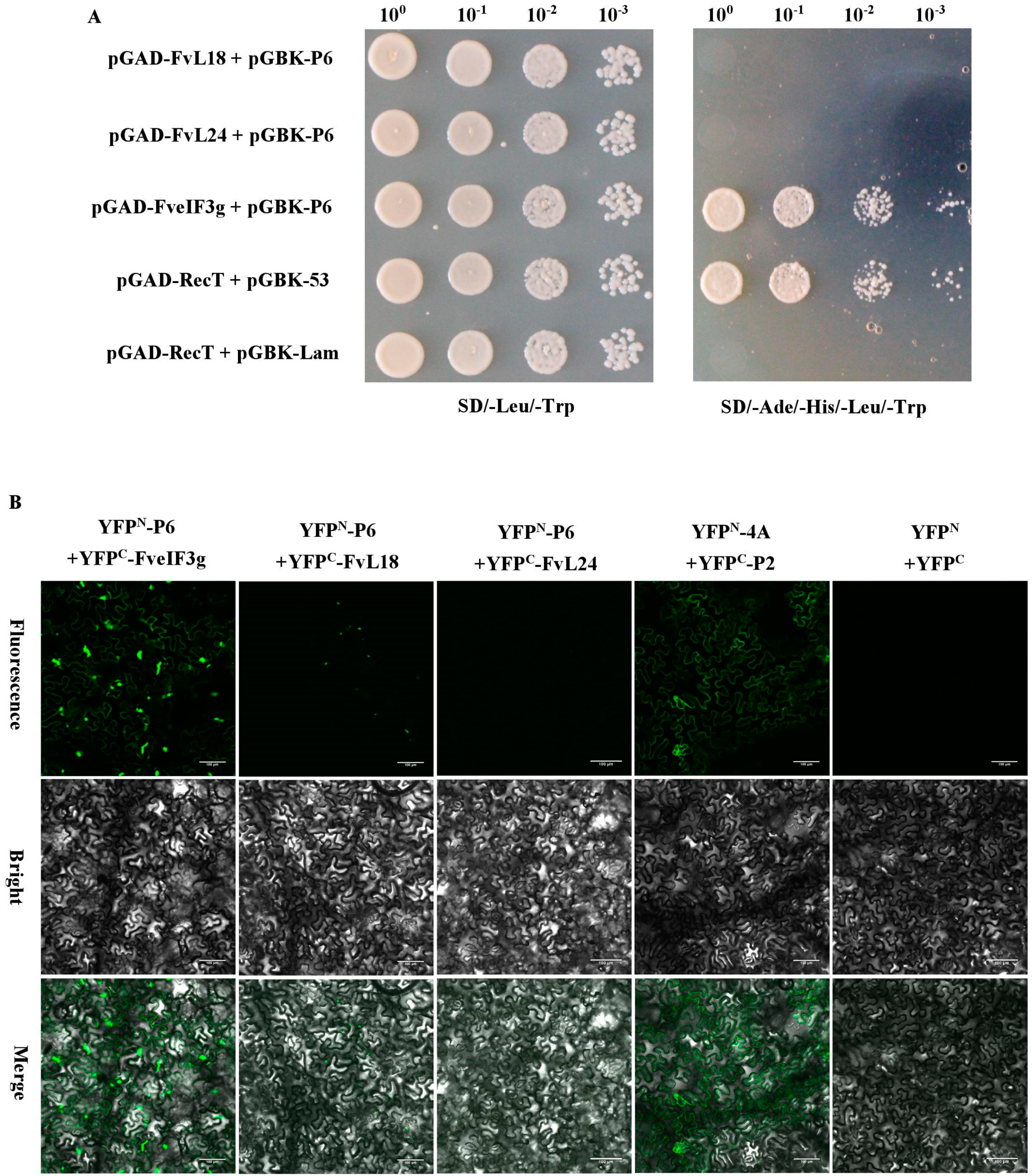 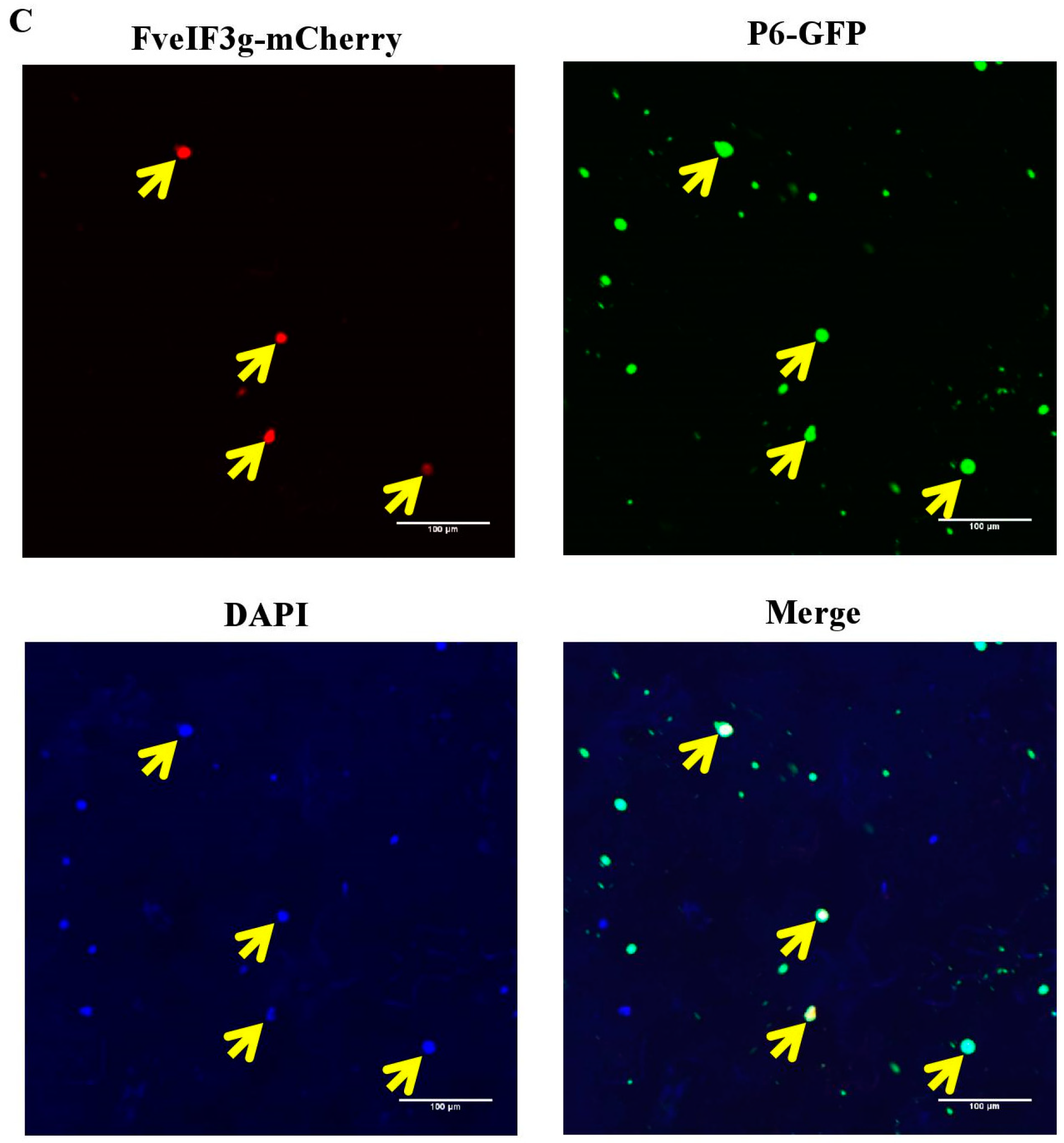 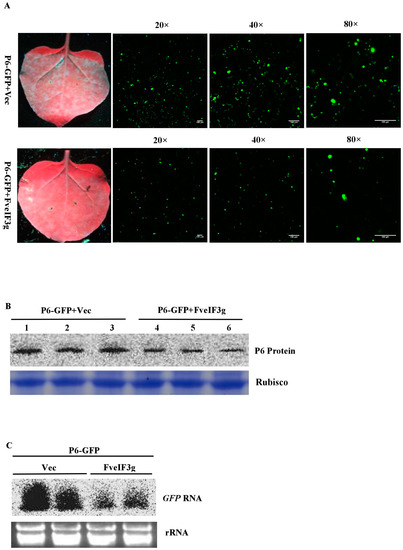 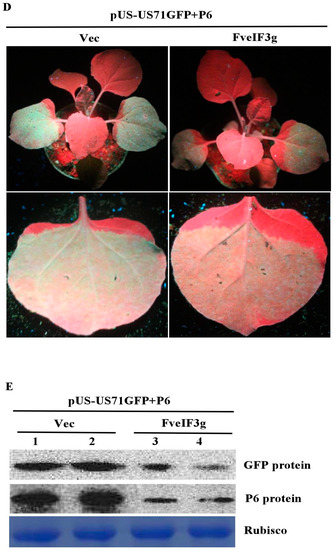 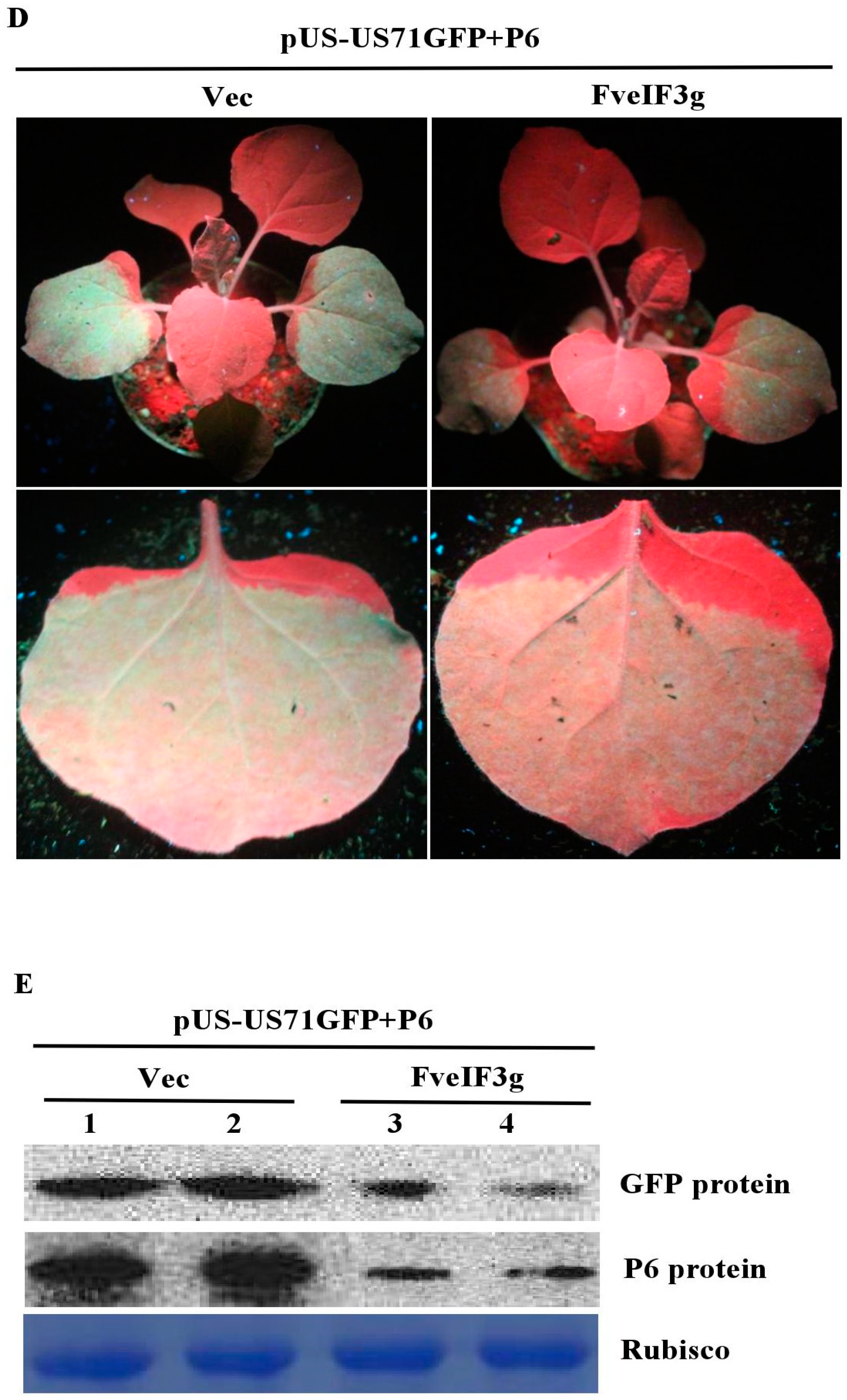