Respiratory syncytial virus (RSV) belongs to the family Pneumoviridae and contains a negative-sense single-stranded RNA genome. RSV infection is a leading cause of severe acute lower respiratory tract disease and related hospitalization in children and the elderly [1,2]. Despite the global burden from RSV infection, there are no available RSV-specific vaccines or effective therapeutic agents at present.
The cellular innate immune system utilizes various sensors including Retinoic acid inducible gene-I (RIG-I) and Toll-like receptors (TLRs) to detect viral infection and activate antiviral immune signaling pathways [3,4]. Among these, RIG-I and Toll-like receptor 3 (TLR3) have been implicated in early antiviral immune responses against RSV infection in airway epithelial cells [5]. Deficiency of mitochondrial antiviral signaling protein (MAVS) and myeloid differentiation primary response (MyD88), which are crucial downstream molecules of RIG-I signaling and TLR signaling, respectively, resulted in an increased viral load in mice, indicating the role of RIG-I and TLR signaling pathways against RSV infection [6]. RIG-I, a cytoplasmic RNA-sensing molecule, has been well-known to trigger antiviral signaling, including the production of type-I interferon [7]. RIG-I comprises 2 N-terminal caspase recruitment domains (CARDs), a helicase domain and a C-terminal regulatory domain (CTD). Upon recognition of viral RNAs by the helicase and CTD domain of RIG-I, the two N-terminal CARDs are exposed and interact with TRIM25, a E3-ubiquitin ligase. TRIM25 delivers the K63-linked polyubiquitin chain to the RIG-I CARDs to induce RIG-I oligomerization and subsequent interaction with MAVS [8]. Since TRIM25 plays a crucial role in RIG-I signaling pathways, several viral proteins target TRIM25 to evade RIG-I-mediated antiviral responses [9]. For example, NS1 of influenza A virus interacts with TRIM25 to inhibit its oligomerization and subsequent RIG-I ubiquitination [10].
Like other viruses, RSV has evolved several strategies to antagonize antiviral immune responses [11]. The role of Nonstructural Proteins 1 and 2 (NS1 and NS2) in suppressing innate immune signaling has been particularly highlighted [12,13,14]. The RSV NS2 protein has been shown to interact with RIG-I CARDs to suppress RIG-I signaling [15]. NS1 protein is also known to co-localize with MAVS, suggesting its role in suppressing RIG-I-mediated antiviral responses [16]. Interestingly, the NS1 and NS2 of RSV are capable of inducing the degradation of key molecules in RIG-I signaling and type-I interferon signaling including RIG-I, IRF3, IRF7, TBK1 and STAT2, to suppress antiviral responses by forming a large degradative complex [17]. In the previous study, ectopic expression of NS1 or NS2 sufficiently inhibited RIG-I-mediated interferon production, indicating that NS1 is also capable of suppressing RIG-I signaling by itself like NS2 [18]. However, the underlying mechanism and molecular target of NS1-mediated RIG-I signaling inhibition remain elusive yet. In the current study, we explored the possibility that NS1 proteins of RSV interfere with TRIM25-mediated RIG-I ubiquitination to dissect the molecular mechanism underlying the direct inhibition of RIG-I signaling by NS1/2 of RSV.

HEK293T cells in 24-well plates were transfected with Interferon-β firefly luciferase (0.25 μg/well) and thymidine kinase (TK) renilla reporter plasmids (0.13 μg/well) were transfected along with other constructs as indicated [21]. After 24 h, transfected HEK293T cells were lysed in passive lysis buffer (Promega, Madison, WI, USA) at RT for 15 min. Cell lysates were then analyzed by a dual-luciferase assay according to the instruction (Promega). All assays were performed in triplicate and repeated at least three times.

HEK293T cells were seeded onto fibronectin coated coverslips in a 24-well plate. After 24 h, cells were transfected with FLAG-tagged RSV NS1 and V5-tagged TRIM25 and incubated for 24 h. Then, cells were fixed with 4% paraformaldehyde followed by blocking and permeabilization in permeabilization buffer (0.5% BSA, 0.2% triton X-100 in PBS) at RT in 5 min. The cells were incubated with anti-FLAG mouse and anti-V5 rabbit antibodies in 0.5% BSA solution at 4 °C overnight. Next day, the cells were extensively washed and incubated with FITC- and PE-labeled secondary antibodies at RT for 2 h. The co-localization between RSV NS1-FLAG and TRIM25-V5 was analyzed by Nanoscope K1-Fluo confocal microscope.

Data were presented as the mean ± SEM. Statistical comparisons between the control and treated groups were performed using the Student’s t-test. A value of p ≤ 0.05 was considered to be significant.

To confirm the suppression of RIG-I-mediated signaling by NS1, RSV NS1 was transfected along with constitutively active RIG-I-2CARDs (RIG-IN). Ectopically expressed NS1 inhibited interferon-β promoter activity that was induced by RIG-IN as determined by the luciferase assays in HEK293T cells, confirming that NS1 itself is capable of inhibiting RIG-I-mediated antiviral signaling (Figure 1A). Consistently, RIG-IN-mediated induction of interferon-β and ISG15 mRNA synthesis was significantly hampered by ectopic expression of NS1 (Figure 1B). Similar results were obtained from experimental settings using A549 and HEp-2 cells, suggesting that NS1 is able to suppress RIG-I-mediated type-I interferon production in various cells including airway epithelial cells (Figure 1C,D).

3.5. Ectopic Expression of TRIM25 Reverses the Effect of NS1 on RIG-I-Mediated Interferon Signaling

Many viruses possess defensive mechanisms against the host immune system for their effective replication. The NS1 and NS2 proteins of RSV have been shown to effectively inhibit the host immune system. NS proteins target diverse proteins related to type-I interferon induction and signal transduction. For example, RSV NS1 upregulates SOCS1 and SOCS3 and triggers STAT2 degradation [12]. RSV NS1 also inhibits the interferon alpha response by targeting the interferon alpha receptor [13]. NS2 also degrades STAT2 to downregulate interferon-mediated JAK-STAT signaling responses [14]. In addition, NS1 and NS2 exert suppressive activities on the RIG-I-mediated antiviral signaling pathway, which is a crucial response against RSV infection. Previous studies suggest that NS1 and NS2 inhibit RIG-I-mediated signaling by inducing degradation of key molecules such as IRF3/7 [21,22].
In this study, we explored the possibility that these proteins interfere with RIG-I signaling by directly inhibiting RIG-I activation. Indeed, we could demonstrate that NS1 and NS2 suppressed TRIM25-mediated ubiquitination of RIG-I, which is a crucial step for RIG-I activation. Previously, NS2 has been shown to interact with RIG-I, whereas the interaction between NS1 and RIG-I could not be detected [15]. Thus, suppression of RIG-I ubiquitination by NS2 may be due to its interaction with RIG-I. We also could not detect interaction between NS1 and RIG-I, indicating that NS1 may utilize a separate molecular mechanism to suppress RIG-I ubiquitination. In addition, a previous study showed that NS1 co-localizes with MAVS and inhibits RIG-I interaction with MAVS [16]. Considering that RIG-I ubiquitination is required for its oligomerization and interaction with MAVS, it is conceivable that NS1 suppresses RIG-I interaction with MAVS by interfering with RIG-I ubiquitination, as shown in the current study.
Thus, it was tempting to test the hypothesis that NS1 targets TRIM25, an E3-ubiquitin ligase responsible for RIG-I ubiquitination. Moreover, several viruses utilize their proteins to interfere with TRIM25 activation and subsequent RIG-I activation. For instance, the Influenza NS1 binds to TRIM25 and inhibits TRIM25 multimerization [10]. The SARS coronavirus nucleocapsid protein binds to TRIM25 SPRY and disrupts RIG-I ubiquitination [23]. In this study, the interaction between NS1 and TRIM25 was demonstrated. Since several studies have shown that TRIM25 migrates to the mitochondria upon viral infection to interact with MAVS [24], the interaction between MAVS and NS1 might be a result of the interaction between NS1 and TRIM25. As expected, NS1 inhibited the interaction between RIG-I CARD and MAVS. These results clearly indicate that NS1 is capable of suppressing RIG-I activation by targeting TRIM25 and inhibiting RIG-I ubiquitination through TRIM25. We have shown that NS1 could suppress the interferon-β promoter activity induced by RIG-IN and MAVS, indicating that NS1 is also capable of suppressing downstream signaling. This can be explained by previous studies showing that NS1 can trigger the degradation of critical downstream molecules such as IRF3. Nonetheless, we have shown that NS1 can suppress TRIM25-mediated ubiquitination of RIG-IN without affecting its amount and that its effect on RIG-IN-mediated interferon-β promoter activity can be reversed by an excessive amount of TRIM25. These results indicate that inhibition of TRIM25-mediated RIG-I ubiquitination by NS1 contributes to the suppression of RIG-I signaling, at least in part.
Interestingly, the biochemical domain mapping study revealed that the SPRY domain of TRIM25 is responsible for interaction with NS1. Given that the SPRY domain is responsible for interaction with RIG-I, a possible molecular mechanism is that NS1 binds to TRIM25 and sequesters it to prevent its interaction with RIG-I. However, we could not observe a significant reduction in interaction between RIG-I and TRIM25 by NS1 (Data not shown). Further studies are needed to identify the detailed molecular mechanism of RSV NS1-mediated TRIM25 dysfunction.
RSV NS2 is known to bind with RIG-I CARD and disrupts its activation [15] and we showed that RSV NS1 interacts with TRIM25 to decrease CARD ubiquitination. In a previous study, RSV NS1 and NS2 have been shown to exist as homo- or heterodimers in mammalian cells. The RSV NS1-NS2 dimer was detected in mitochondria, suggesting that NS1 and NS2 can cooperate to suppress RIG-I signaling [18]. It is also possible that the dimer of RSV NS1 and NS2 interacts with TRIM25 and RIG-I CARD through each NS protein interacting with TRIM25 or RIG-I CARD. Although we could not observe a significant synergistic effect of NS1 and NS2 co-expression in terms of suppression of RIG-I ubiquitination (Figure 1C), the NS1 and NS2 interaction may have additional functions in RIG-I signaling. For instance, it is possible that the NS1/NS2 complex induces RIG-I degradation followed by suppression of RIG-I K63-ubiquitination for complete inhibition of the RIG-I signaling pathway.
Collectively, this study demonstrates that RSV NS1 interacts with TRIM25 and suppresses TRIM25-mediated RIG-I activation to evade RIG-I-mediated antiviral responses. Further studies including structural analysis of protein interaction and analysis of the interaction modes between RIG-I, TRIM25, NS1 and NS2 need to be conducted.

This work was supported by the Basic Science Research Program grants through the National Research Foundation of Korea (NRF), which was funded by the Ministry of Science, ICT and Future Planning (NRF-2017R1A2B4005596) and by the KIST Institutional Program (Project No. 2Z05460-18-075). 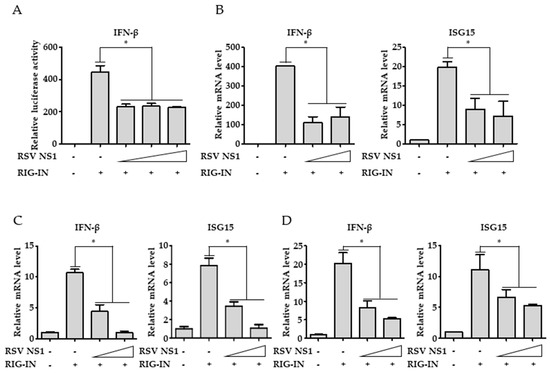 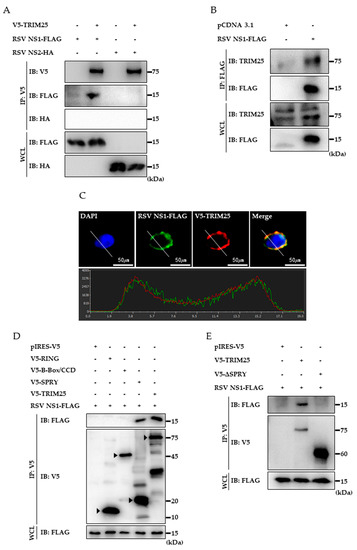 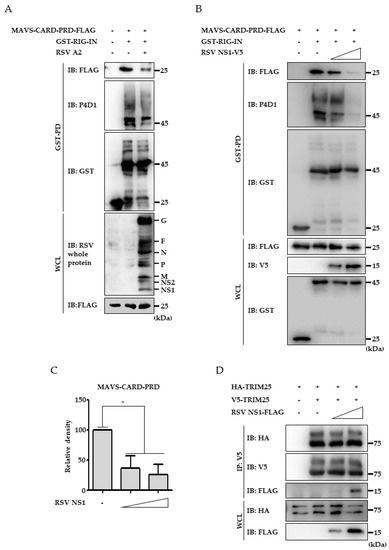