In a search for viral infections, double-stranded RNA (dsRNA) were recovered from a diseased cyclamen (Cyclamen persicum Mill.) accession (Cic) and analyzed by high-throughput sequencing (HTS) technology. Analysis of the HTS data showed the presence of Fig mosaic emaravirus (FMV) in this accession. The complete sequences of six FMV-Cic RNA genomic segments were determined from the HTS data and using Sanger sequencing. All FMV-Cic RNA segments are similar in size to those of FMV from fig (FMV-Gr10), with the exception of RNA-6 that is one nucleotide longer. The occurrence of FMV in cyclamen was investigated through a small-scale survey, from which four plants (out of 18 tested) were found RT-PCR positive. To study sequence variations of cyclamen isolates of FMV, RT-PCR products generated through the amplification of the partially RNA-dependent RNA polymerase (RdRp, RNA-1), glycoprotein (GP, RNA-2), and nucleocapsid (NCP, RNA-3) genes were explored. The nucleotide sequence identities for cyclamen isolates ranged between 86% and 99% in RNA-1, 93% and 99% in RNA-2, and 98% and 99% in RNA-3, while lower identity levels were observed with the sequences of fig isolates. Based on the phylogenetic tree obtained with a 304-nt fragment of RNA3, all FMV isolates from cyclamens were assigned to a single cluster close to fig isolates from the Mediterranean. FMV was graft-transmitted to healthy cyclamens eliciting symptoms similar to those observed in the Cic accession, thus suggesting a causal role of FMV in the symptoms that prompted the investigation. This is the first report of FMV in a non-fig host, Cyclamen persicum, a finding that may help in the control of the mosaic and mosaic-like diseases of fig and cyclamen, respectively. View Full-Text
Keywords: high-throughput sequencing; cyclamen; Fig mosaic emaravirus high-throughput sequencing; cyclamen; Fig mosaic emaravirus
►▼ Show Figures 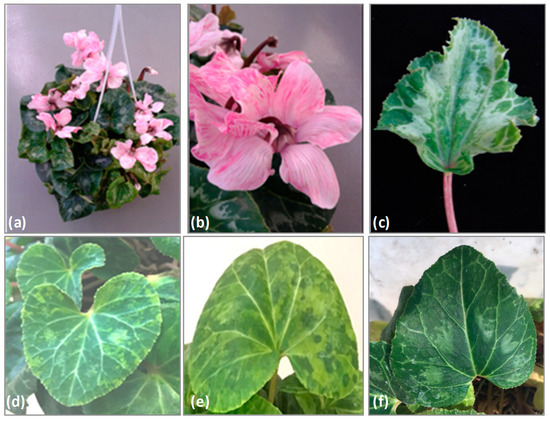