Novel Mitoviruses and a Unique Tymo-Like Virus in Hypovirulent and Virulent Strains of the Fusarium Head Blight Fungus, Fusarium boothii
Next Article in Special Issue

Pantoea Bacteriophage vB_PagS_Vid5: A Low-Temperature Siphovirus That Harbors a Cluster of Genes Involved in the Biosynthesis of Archaeosine

A novel low-temperature siphovirus, vB_PagS_Vid5 (Vid5), was isolated in Lithuania using Pantoea agglomerans isolate for the phage propagation. The 61,437 bp genome of Vid5 has a G–C content of 48.8% and contains 99 probable protein encoding genes and one gene for tRNASer. A comparative sequence analysis revealed that 46 out of 99 Vid5 open reading frames (ORFs) code for unique proteins that have no reliable identity to database entries. In total, 33 Vid5 ORFs were given a putative functional annotation, including those coding for the proteins responsible for virion morphogenesis, phage-host interactions, and DNA metabolism. In addition, a cluster of genes possibly involved in the biosynthesis of 7-deazaguanine derivatives was identified. Notably, one of these genes encodes a putative preQ0/preQ1 transporter, which has never been detected in bacteriophages to date. A proteomic analysis led to the experimental identification of 11 virion proteins, including nine that were predicted by bioinformatics approaches. Based on the phylogenetic analysis, Vid5 cannot be assigned to any genus currently recognized by ICTV, and may represent a new one within the family of Siphoviridae. View Full-Text
Keywords: Pantoea agglomerans; vB_PagS_Vid5; LT bacteriophage; Siphoviridae; 7-deazaguanine Pantoea agglomerans; vB_PagS_Vid5; LT bacteriophage; Siphoviridae; 7-deazaguanine
►▼ Show Figures 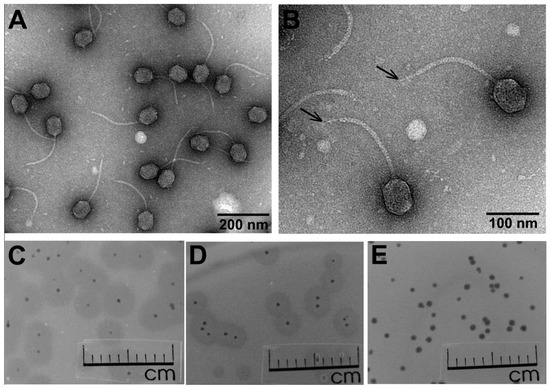