The recent prolonged drought in Melbourne, Australia has had a deleterious effect on the urban forest, resulting in the premature decline of many mature trees and a consequent decline in the environmental services that trees are able to provide to urban residents. Measuring the severity of tree stress and defoliation due to various climatic factors is essential to the ongoing delivery of environmental services such as shade and carbon sequestration. This study evaluates two methods to assess the vitality of drought stressed Elm trees within an inner-city environment—bark chlorophyll fluorescence measured on large branches and an urban visual vitality index. Study species were Ulmus procera Salisb. (English Elm) and Ulmus × hollandica (Dutch Elm), which are important character and shade tree species for Melbourne. Relationships were identified between leaf water potential and the urban visual vitality index and between leaf water potential and bark chlorophyll fluorescence measured on large branches, indicating that these methods could be used to assess the effect of long-term drought and other stressors on urban trees. View Full-Text
Keywords: urban tree growth; climate change; drought stress urban tree growth; climate change; drought stress
►▼ Show Figures 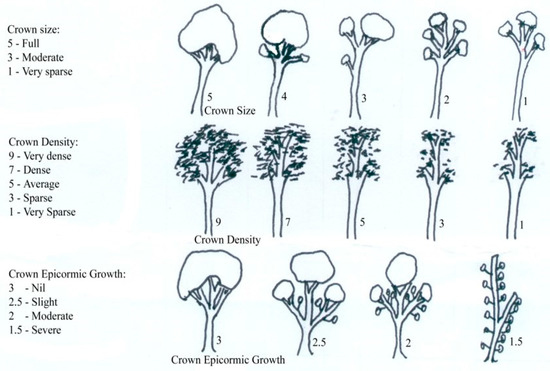