Research highlights: Interaction effects of coniferous on deciduous species have been investigated before the background of climate change. Background and objectives: The cultivation of European beech (Fagus sylvatica L.) in mixed stands has currently received attention, since the future performance of beech in mid-European forest monocultures in a changing climate is under debate. We investigated water relations and nitrogen (N) nutrition of beech in monocultures and mixed with silver-fir (Abies alba Mill.) in the Black Forest at different environmental conditions, and in the Croatian Velebit at the southern distribution limit of beech, over a seasonal course at sufficient water availability. Material and methods: Water relations were analyzed via δ13C signatures, as integrative measures of water supply assuming that photosynthesis processes were not impaired. N nutrition was characterized by N partitioning between soluble N fractions and structural N. Results: In the relatively wet year 2016, water relations of beech leaves, fir needles and roots differed by season, but generally not between beech monocultures and mixed cultivation. At all sites, previous and current year fir needles revealed significantly lower total N contents over the entire season than beech leaves. Fir fine roots exhibited higher or similar amounts of total N compared to needles. Correlation analysis revealed a strong relationship of leaf and root δ13C signatures with soil parameters at the mixed beech stands, but not at pure beech stands. While glutamine (Gln) uptake capacity of beech roots was strongly related to soil N in the monoculture beech stands, arginine (Arg) uptake capacities of beech roots were strongly related to soil N in mixed stands. Conclusions: Leaf N contents indicated a facilitative effect of silver-fir on beech on sites where soil total N concentrations where low, but an indication of competition effect where it was high. This improvement could be partially attributed to protein contents, but not to differences in uptake capacity of an individual N source. From these results it is concluded that despite similar performance of beech trees at the three field sites investigated, the association with silver-fir mediated interactive effects between species association, climate and soil parameters even at sufficient water supply. View Full-Text
Keywords: Fagus sylvatica L.; Abies alba Mill.; N nutrition; mixed stands; pure stands; soil N; water relations Fagus sylvatica L.; Abies alba Mill.; N nutrition; mixed stands; pure stands; soil N; water relations
►▼ Show Figures 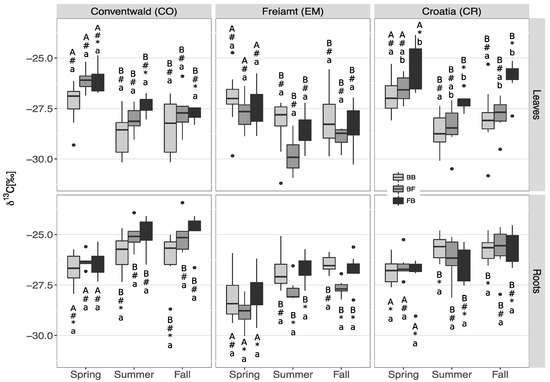