Revitalizing REDD+ Policy Processes in Vietnam: The Roles of State and Non-State Actors

This paper investigates non-governmental organisation (NGO) involvement in policy processes related to Norway’s International Climate and Forest Initiative (NICFI) comparing four countries: Norway, Brazil, Indonesia, and Tanzania. Based on documents and interviews, NGO involvement is mapped using a conceptual framework to categorise and compare different roles and modes of engagement. NGOs have co-operated with government in policy design and implementation, albeit to varying degrees, in all four countries, but expressed relatively little public criticism. Funding seems to have an influence on NGOs’ choices regarding whether, what, when, and how to criticise. However, limited public criticism does not necessarily mean that the NGOs are co-opted. They are reflexive regarding their possible operating space, and act strategically and pragmatically to pursue their goals in an entrepreneurial manner. The interests of NGOs and NICFI are to a large extent congruent. Instead of publicly criticising a global initiative that they largely support, and thus put the initiative as a whole at risk, NGOs may use other, more informal, channels to voice points of disagreement. While NGOs do indeed run the risk of being co-opted, their opportunity to resist this fate is probably greater in this instance than is usually the case because NICFI are so reliant on their services. View Full-Text
Keywords: REDD+; NGOs; policymaking; co-operation; co-optation; policy entrepreneurship REDD+; NGOs; policymaking; co-operation; co-optation; policy entrepreneurship
►▼ Show Figures 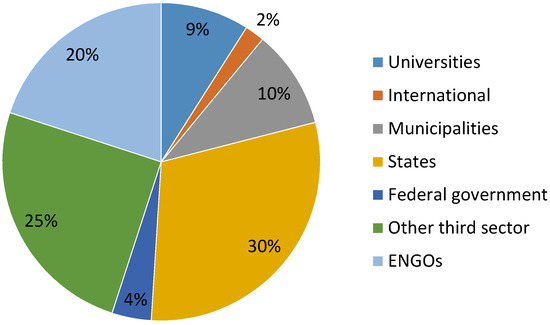