The magnitude of drought impact in forest ecosystems depends on which group of trees are more severely affected; greater mortality of smaller trees can modulate the trajectories of succession, while the mortality of larger trees can disproportionately offset the ecosystem’s carbon balance. Several studies have documented a greater vulnerability of large trees to extreme droughts while some other studies reported a greater growth reduction in smaller trees during droughts. We tested these hypotheses by comparing tree basal area increment (BAI), drought resistance (i.e., magnitude of growth decline during drought), and resilience (i.e., magnitude of growth recovery after drought) across five different age-classes in black pine (Pinus nigra Arn. ssp. salzmannii) forests in Spain. Our results showed that the BAI patterns, drought resistance, and resilience were strongly influenced by tree age-classes. In addition, the effect of climatic water balance (precipitation minus potential evapotranspiration) on BAI significantly varied among age-classes. The effect of water balance on BAI was lower for younger age-classes (1–39 years of age) compared to older age-classes. We observed a greater growth reduction (i.e., lower resistance) in older trees (>40 years of age) during droughts compared to younger trees (<40 years of age). However, all trees, irrespective of their ages, were able to recover the growth rates after the drought. In general, younger trees showed a greater capacity in recovering the growth rate (i.e., more resilient) than older trees. We detected no significant effects of stand basal area and stand density on BAI, drought resistance, and resilience. Overall, our results indicated that growth of older trees was more negatively affected during drought. Therefore, these older/larger trees can be selected for commercial thinning, or can be released from competition, which can minimize the potential impacts of future droughts in black pine forests in Spain. View Full-Text
Keywords: climate change; drought; black pine; resistance; resilience climate change; drought; black pine; resistance; resilience
►▼ Show Figures 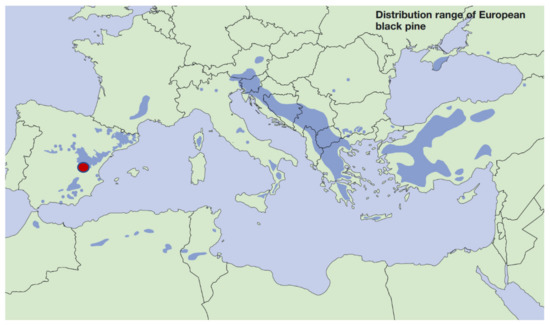