This paper presents an analysis of the radial growth, tree dimensions, and allometry of three phenological pedunculate oak (Quercus robur L.; QURO) varieties (early (E-QURO), typical (T-QURO), and late (L-QURO)), from a common garden experiment. We focused on the resistance and resilience of each variety to drought events, which occurred in 2012 and 2017, as well as their recovery potential during juvenile and mature growth phases, with the goal of clarifying how QURO drought sensitivity is influenced by tree phenology and growth stage. Our results indicate that E-QURO is more drought resistant, while T-QURO and L-QURO exhibit greater recovery potential after a drought event. Hence, typical and late QURO varieties are better prepared to withstand climate change. We also noted differences in the physical dimensions and the allometry of the studied QURO varieties. On average, 21-year-old QURO specimens from the analyzed stand are 9.35 m tall, have a crown width (CW) of 8.05 m, and a diameter at breast height (DBH) of 23.71 cm. Although T-QURO varieties had the greatest DBH and CW, they were shorter than E- and L-QURO, which are similar in height. T-QURO is also shorter relative to DBH, while L-QURO has a wider crown relative to tree height (TH). Intra-variety variations are higher than variations among half-sib (open-pollinated) families of each variety. Moreover, the adopted regression model provided a better fit to the CW/DBH ratio than to TH/DBH and CW/TH. View Full-Text
Keywords: dendrochronology; drought; phenology; tree ring; intra-species variation; climate change adaptation; common garden experiment; early and late wood dendrochronology; drought; phenology; tree ring; intra-species variation; climate change adaptation; common garden experiment; early and late wood
►▼ Show Figures 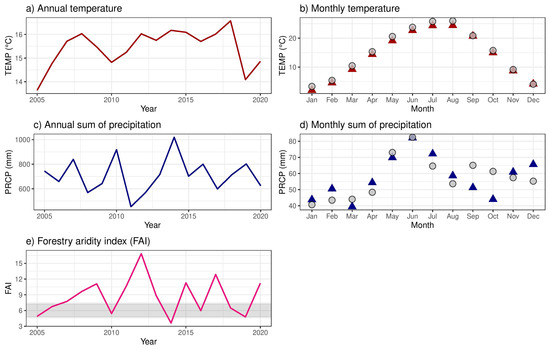