The impact of solar cycles on forest stands, while important in the development of the forest environment during climate change, has not yet been sufficiently researched. This work evaluates the radial growth of European beech (Fagus sylvatica L.) in the mountain areas of southern Italy and central Europe (Czech Republic, Poland) in correlation to solar cycles (sunspot number), extreme climatic events, air temperatures and precipitation totals. This research is focused on the evaluation of the radial growth of beech (140 dendrochronological samples with 90–247 years of age) from 1900 to 2019. The time span was divided into the following three periods: (1) a period of regular harvesting (1900–1969), (2) a period of air pollution crisis (1970–1985) and (3) a period of forest protection (1986–2019). The results indicate that the solar cycle was significantly involved in radial growth on all research plots. With regard to the evaluated precipitation totals, seasonal temperatures and the sunspot number, the latter was the most significant. Temperatures had a positive effect and precipitation had a negative effect on the radial increment of beech in central Europe, while in southern Italy, the effect of temperature and precipitation on the increment is reversed. In general, the limiting factor for beech growth is the lack of precipitation during the vegetation season. The number of negative pointer years (NPY) with an extremely low increment rose in relation to the decreasing southward latitude and the increasing influence of climate change over time, while a higher number of NPY was found in nutrient-richer habitats compared to nutrient-poorer ones. Precipitation and temperature were also reflected in the cyclical radial growth of European beech. The relationship between solar cycles and the tree ring increment was reversed in southern Italy and central Europe in the second and third (1970–2019) time periods. In the first time period (1900–1969), there was a positive relationship of the increment to solar cycles on all research plots. In the tree rings of European beech from southern Italy and central Europe, a relationship to the 11-year solar cycle has been documented. This study will attempt to describe the differences in beech growth within Europe, and also to educate forest managers about the relevant influence of solar cycles. Solar activity can play an important role in the growth of European beech in central and southern Europe, especially during the recent years of global climate change. View Full-Text
Keywords: tree-ring data; cyclical dynamics; growth adaptation; temperature; precipitation; sunspot number tree-ring data; cyclical dynamics; growth adaptation; temperature; precipitation; sunspot number
►▼ Show Figures 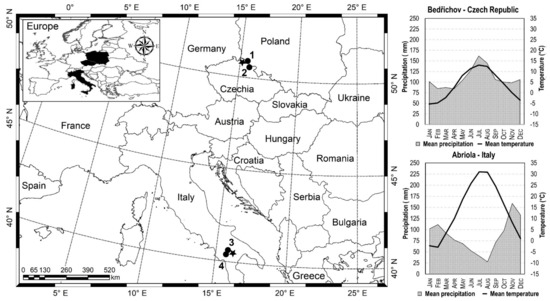