A 13-Year Approach to Understand the Effect of Prescribed Fires and Livestock Grazing on Soil Chemical Properties in Tivissa, NE Iberian Peninsula
Next Article in Special Issue

Recent climatic changes have resulted in an increased frequency and prolonged periods of drought and strained water resources affecting plant production. We explored the possibility of reducing irrigation in a container nursery and studied the growth responses of seedlings of four economically important forest trees: broadleaf deciduous angiosperms Fagus sylvatica L., Quercus petraea (Matt.) Liebl., and evergreen conifers Abies alba Mill. and Pinus sylvestris L. We also studied markers of water stress including modifications of biomass allocation, leaf anatomy, proline accumulation, and expression of selected genes. Growth of the broadleaved deciduous species was more sensitive to the reduced water supply than that of conifers. Remarkably, growth of the shade tolerant Abies was not affected. Adjustment of biomass allocations was strongest in P. sylvestris, with a remarkable increase in allocation to roots. In response to water deficit both deciduous species accumulated proline in leaves and produced leaves with shorter palisade cells, reduced vascular tissues, and smaller conduit diameters. These responses did not occur in conifers. Relative transcript abundance of a gene encoding the Zn-finger protein in Q. petraea and a gene encoding the pore calcium channel protein 1 in A. alba increased as water deficit increased. Our study shows major differences between functional groups in response to irrigation, with seedlings of evergreen conifers having higher tolerance than the deciduous species. This suggests that major water savings could be achieved by adjusting irrigation regime to functional group or species requirements. View Full-Text
Keywords: biomass allocation; drought; irrigation; leaf anatomy; mRNA level; proline biomass allocation; drought; irrigation; leaf anatomy; mRNA level; proline
►▼ Show Figures 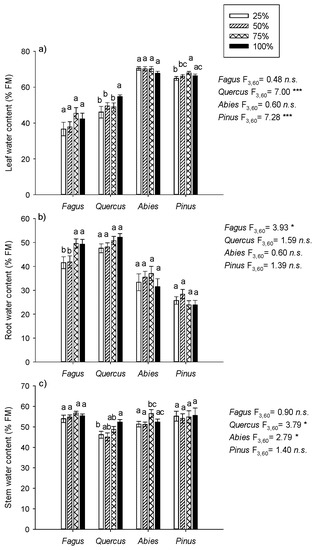