In Estonia, hardwoods form approximately 50% of all forest area, where the main species are birch (30%), gray alder (9%), aspen (6%) and black alder (4%). Birch has been extensively used by the veneer-based industry, but species like black alder, gray alder and aspen have not been commonly used by the veneer-based products industry due to the lower quality of this resource. The aim of this research is to determine the effect of different lay-up schemes and usages of gray alder, black alder and aspen on the mechanical properties of plywood, by replacing birch veneer in the plywood core with alternative wood species. The main veneer and plywood characteristics will be evaluated according to the current standards, e.g., veneer strength perpendicular to grain, plywood bonding and bending strength, and modulus of elasticity. All processing parameters will be kept similar to those used generally by birch plywood manufacturers. The results showed that birch and black alder plywood panels had generally the highest bending strength properties, followed by grey alder and aspen. It was also found that, for proper gluing, birch veneers had the lowest glue consumption, 152 g/m2, and aspen had the highest glue consumption, 179 g/m2. It was found that when lower density wood was used in the plywood, the product density increased. Low density wood veneers had higher glue consumption, and also higher compaction in thickness than birch veneers under the same pressure. Overall, it was shown that the wood species used in this study have slightly lower strength properties, but with proper lay-up schemes, these wood species could be successfully used by the veneer-based products industry. View Full-Text
Keywords: plywood; lay-up; birch; grey alder; black alder; aspen; density; bonding strength; bending strength plywood; lay-up; birch; grey alder; black alder; aspen; density; bonding strength; bending strength
►▼ Show Figures 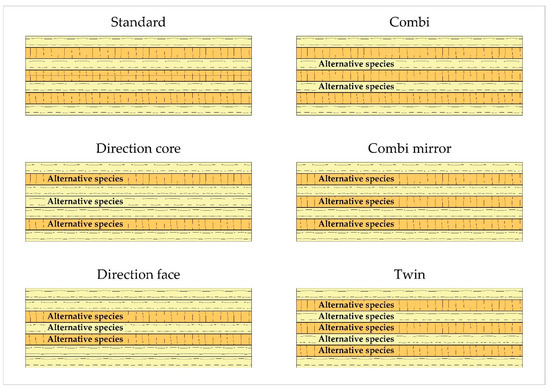