Factors Affecting the Adoption of Agroforestry Practices: Insights from Silvopastoral Systems of Colombia

In Colombia, one-third of the land is devoted to cattle farming, which is one of the main drivers of deforestation, land degradation, loss of biodiversity, and emissions of greenhouses gases. To mitigate the environmental impacts of cattle farming, agroforestry practices have been extensively promoted with mixed results. Despite research and extension efforts over the last 20-year period, agroforestry systems still involve a complex knowledge process among stakeholders that needs to be addressed. To understand the drivers of cattle farmers’ behavior with regard to adopting agroforestry practices, we apply a double hurdle regression for different social, economic and productive information to capture the decision to adopt and the intensity of the adoption as a joint decision of such practices. For this purpose, we use data from a survey (implemented as part of an international project) administered to 1605 cattle farmers located in five agro-ecological regions in Colombia. Our dependent variables are defined by the adoption of four agroforestry practices: scattered trees, trees and shrubs for forage production, forestry plantations, and management of native forest. The adoption decision of agroforestry practices was influenced by the access and use of credit, location, and the implemented livestock system. Herd size and participation in development projects that involved tree planting had a positive influence on the adoption and intensity of agroforestry practices, while the variable associated with presence of water springs tended to boost the intensity of adoption. The diffusion of these technologies might be increased among farmers who have adopted and who are potential adopters, and social capital and networking can play a crucial role in spreading agroforestry as sustainable practice. View Full-Text
Keywords: agroforestry practices; livestock systems; adoption; conservation; hurdle model agroforestry practices; livestock systems; adoption; conservation; hurdle model
►▼ Show Figures 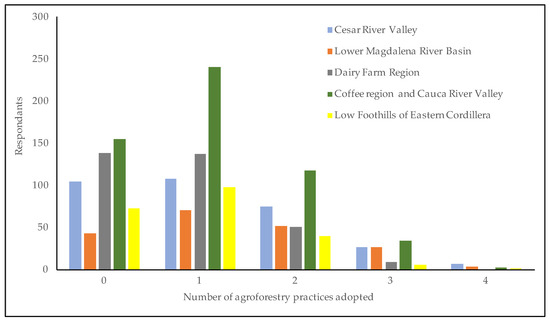