A current ongoing unprecedented outbreak of Ips typographus (L.) (Coleoptera, Curculionidae, Scolytinae) in the Białowieża Primeval Forest (BPF) has nearly eliminated Norway spruce (Picea abies L. Karst) as a major forest tree species there, since over 1 million trees have died. In this part of Europe, Norway spruce has grown for hundreds of years, previously accounting for 30% of forest species composition. The aim of this study was to evaluate 47 “Monuments of Nature” of Norway spruce as follows: (i) their current health status in the managed forests of Białowieża Forest District; (ii) possible causes and changes in their health during the last bark beetle outbreak; and (iii) potential losses from the gene pool. Our findings from ground and remote sensing inventories showed that only 12 out of 47 (25%) monumental trees protected by law survived until 2017 in the study area. The rest (75%) of the investigated trees had died. An analysis of meteorological data from Białowieża suggested that the beginning of the I. typographus outbreak in 2012 was associated with diminishing precipitation during growing seasons prior to this time and subsequent increases in annual temperature, coupled with heavy storms in 2017 toppling weakened trees. A comparison of old-growth “Monuments of Nature” spruce in the region (n = 47, average age 225 years) to seven reference spruce stands (n = 281, average age 132 years) revealed a loss of unique genetic features based on frequencies of eleven nuclear microsatellite loci. Although all studied populations had similar genetic background (FST(without NA) = 0.003 and no STRUCTURE clustering), all monumental spruce trees shared the highest parameters such as the mean observed and expected number of alleles per locus (Na = 15.909 and Ne = 7.656, respectively), mean allelic richness (AR(11) = 8.895), mean private alleles (Apriv = 0.909), and mean Shannon diversity index (I = 1.979) in comparison to the younger stands. Our results demonstrate that the loss of the old spruce trees will entail the loss of genetic variability of the Norway spruce population within the exceptionally valuable Białowieża Primeval Forest. View Full-Text
Keywords: genetic variability; lowland natural forest; Picea abies; private alleles; remote sensing genetic variability; lowland natural forest; Picea abies; private alleles; remote sensing
►▼ Show Figures 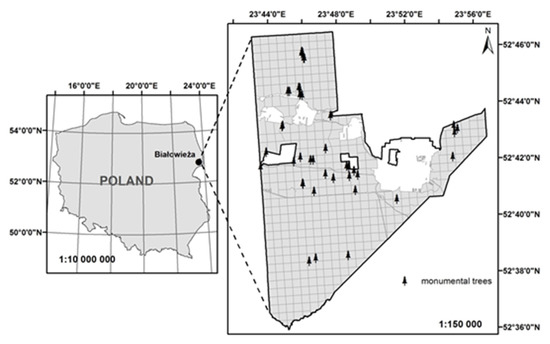