Drought Resistance of Norway Spruce (Picea abies [L.] Karst) and European Beech (Fagus sylvatica [L.]) in Mixed vs. Monospecific Stands and on Dry vs. Wet Sites. From Evidence at the Tree Level to Relevance at the Stand Level

Frequency of drought years is expected to increase through climate warming. Mixed stands have often shown to be more productive than monospecific stands in terms of yield and of resistance against windthrows and bark beetle attacks. Mixture of beech and spruce is of particular interest. However, little is known about its growth reaction to drought. Therefore, we investigated the drought reaction of beech and spruce in mixed vs. monospecific stands along an ecological gradient. In particular, we sought evidence for mixture-related resilience on the individual tree level. Therefore, we quantified the response of tree ring width to drought. Moreover, we attempted to explain the relevance of individual tree response on the stand level by quantifying the stand level loss of volume growth after drought. At the individual tree level, beech was found to be more resilient and resistant in pure vs. mixed stands. Spruce, in contrast, was favored by mixture, and this was especially evident on drier sites. Along the gradient, growth losses at stand level increased in both mixed and pure stands in 2015, with growth gains on the drier sites observed in the same drought year, in accordance with the Stress Gradient Hypothesis. However, the stand level difference of growth loss between mixed and pure stands was not statistically significant. Mitigating mixture effects on the level of the individual tree thus did not become evident on the level of the whole stand. View Full-Text
Keywords: climate change; plasticity; acclimation; ecosystems; legacy effects; biodiversity; drought stress; temperate forests; central Europe climate change; plasticity; acclimation; ecosystems; legacy effects; biodiversity; drought stress; temperate forests; central Europe
►▼ Show Figures 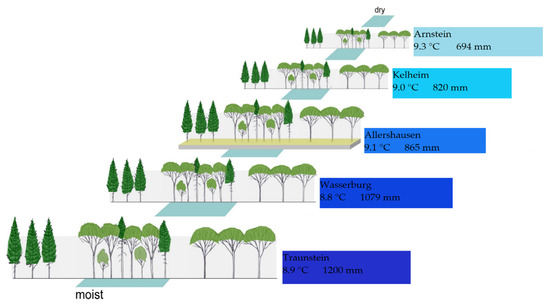