Drought Resistance of Norway Spruce (Picea abies [L.] Karst) and European Beech (Fagus sylvatica [L.]) in Mixed vs. Monospecific Stands and on Dry vs. Wet Sites. From Evidence at the Tree Level to Relevance at the Stand Level
Previous Article in Journal

Hybrid aspen (Populus tremula × tremuloides Michx.) is a fast-growing tree species used for short-rotation forestry in northern latitudes. Aspen species have a rich herbivore fauna, including defoliating leaf beetles that induce emissions of volatile organic compounds (VOCs) when feeding on aspen leaves. We investigated the differential induction of VOCs by male and female Phratora laticollis leaf beetles feeding on hybrid aspen and the differences in the orientation of beetles in response to gender-specific induced VOCs. The hypotheses for the study were (1) the VOCs in the headspace of plants infested with beetles of the two genders individually and in mixed aggregates would vary subtly, and (2) foraging adult beetles would be able to detect differences in VOC blends and use them to fine-tune their orientation choices. In Y-tube bioassays, both females and males preferred VOCs from leaves damaged by one gender (females or males) over undamaged leaves. However, if leaves were damaged by a two-gender population, neither females nor males indicated a preference over volatiles of undamaged leaves. Leaves damaged by both beetle genders simultaneously had significantly increased green leaf volatile (GLV), benzenoid and homoterpene emissions compared to undamaged leaves. Emissions of these compounds possibly indicate higher herbivore pressure and a higher risk of attack by parasitoids and predators and could thus be the cause of the lack of beetle preference. Our findings provide new basic information on gender-based host plant selection by herbivores and may be helpful in the development of sustainable biogenic VOC-based herbivore-control methods for intensive short-rotation hybrid aspen production. View Full-Text
Keywords: herbivore-induced volatiles; biogenic VOCs; nitrogen-containing VOCs; Populus; herbivory herbivore-induced volatiles; biogenic VOCs; nitrogen-containing VOCs; Populus; herbivory
►▼ Show Figures 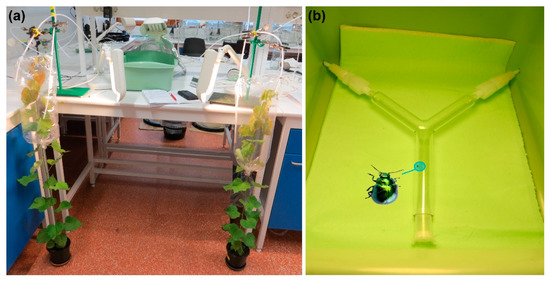