Assessment of Restoration Effects and Invasive Potential Based on Vegetation Dynamics of Pitch Pine (Pinus rigida Mill.) Plantation in Korea

During the period of Japanese occupation (1910–1945) and the Korean War (1950–1953), extensive areas of forest were severely degraded by over-harvesting and fire in Korea. In addition, intensive use of the forest-resources to obtain fuel, organic compost, livestock feed, and so on contributed to forest degradation. As a result, the South Korean government launched large-scale tree planting projects to reforest the denuded mountains particularly in the 1960s. This study aims to evaluate the restoration effects of the pitch pine (Pinus rigida Mill.) plantations and further diagnose the invasive potential of the pitch pine. To arrive at the goals, we investigated the changes of vegetation and soil characteristics in different chronosequences in the pitch pine plantations and in native forests, which were selected as reference stands. Pitch pine plantations were usually planted on mountainous land, which is characterized by an elevation of below 300 m above sea level and a gentle slope below 20°. The species composition of the pitch pine forestations was different depending on the study site but tended to resemble that of the reference stands in the years after forestation. The species diversity showed an increasing trend in response to stand age. The frequency distribution of diameter classes of dominant tree species showed a trend for pitch pine plantations to succeed to native oak stands. A change in canopy profiles depending on stand age also proved the successional trend. The establishment and development of pitch pine plantations for reforestation contributed to erosion control and improved the physic-chemical properties of the soil and thus prepared a basis for the recovery of native vegetation. Such changes in vegetation and soil confirmed that the pitch pine plantations successfully achieved the restoration goals. On the other hand, mature pitch pine stands reproduced young pitch pine stands by self-seeding on the slopes of various sorts of roads including expressways. This shows that pitch pine is successfully established in Korea and thereby the species has been naturalized. However, the natural succession of pitch pine stands in Korea suggests that it is possible to introduce some exotic species for reforestation without resulting in uncontrolled invasion. View Full-Text
Keywords: deforestation; exotic species; Korea; pitch pine; plantation; restoration; succession deforestation; exotic species; Korea; pitch pine; plantation; restoration; succession
►▼ Show Figures 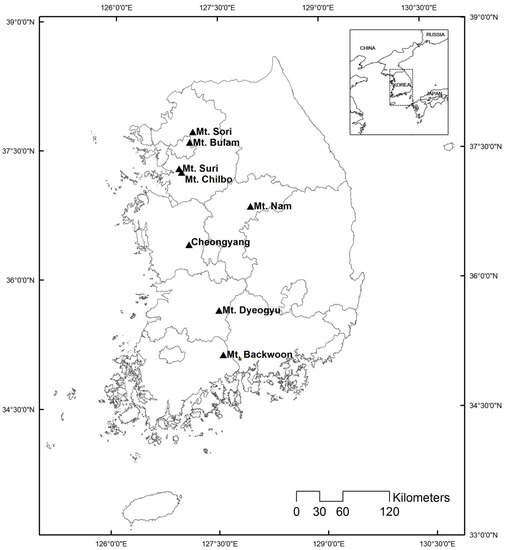