Understanding the dynamics of dominant tree species in tropical forests is important both for biodiversity and carbon-related issues. We focus on the Congo Basin (East of Kisangani) to investigate the respective roles of topographic/soil gradients and endogenous dynamics in shaping local variations in dominance. We used a dataset of 30 1-ha plots, in which all trees above 10 cm diameter at breast height (DBH) were censused. Soil samples were analyzed for standard pedologic variables and a digital elevation model permitted to infer topography and hydromorphy. We found that this forest is characterized by variations in the abundance of three dominant species: Petersianthus macrocarpus (P.Beauv.) Liben (PM), Gilbertiodendron dewevrei (De Wild.) J.Leonard (GD) and Julbernardia seretii (De Wild.) Troupin (JS). These variations occur independently of substratum or topography variations. At plot level, the local relative abundance never reached 50%, the threshold for monodominance proposed in the literature, but rather progressively increased to reach higher values for canopy trees (>60 cm DBH), where this threshold could be exceeded. We found no sign of shifting compositional dynamics, whereby the dominant species would switch between the canopy and the undergrowth. Our results, therefore, support the possibility of the existence of stable dominance states, induced by endogenous processes, such as biological positive feedbacks fostering monodominance. We also document a strong relation between monodominance level and alpha diversity, when giving more weight to abundant species which is expected (R² = 0.79) but also when giving more weight to rare species (R² = 0.37), showing that monodominance influences tree species richness patterns. Structural differences existed between groups, with the PM group having more (and on average smaller) stems and lighter wood on average, but paradoxically also higher biomass and basal area. View Full-Text
Keywords: DR Congo; forest dynamics; Gilbertiodendron dewerei; Julbernadia seretii; monodominance; soil; succession; Petersianthus macrocarpus DR Congo; forest dynamics; Gilbertiodendron dewerei; Julbernadia seretii; monodominance; soil; succession; Petersianthus macrocarpus
►▼ Show Figures 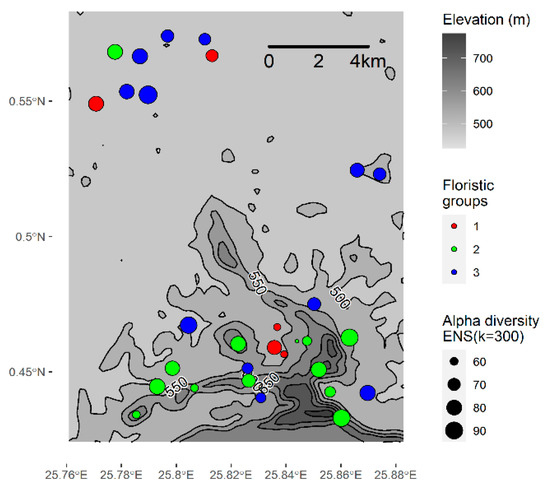