Heat treatment (HT) of a mixture of tannins and inorganic boron compounds showed effective results against wood decay organisms. Boron compounds play a critical role in the preservation of wood against wood decay organisms. The use of tannins and HT represents a relatively new environmentally friendly approach to the wood preservation industry. The aim of this study was to investigate the effect of tannin impregnation and HT on boron depletion, and termite and fungi resistance. Southern yellow pine (SYP) and yellow-poplar (YP) cube samples were used for this study. A mixture of condensed tannins from the Quebracho tree and disodium octaborate tetrahydrate (DOT) was injected into the specimens using a vacuum/pressure cycle, and the specimens were then heat-treated under N2 atmosphere for four hours at 190 °C to investigate both the tannin’s fixative ability to reduce boron leaching and the performance of the mixture against brown and white-rot fungi and termites. Tannins restricted boron leaching in 46% and 34% for SYP and YP, respectively, and also significantly increased the resistance against white-rot fungi for YP. Tannins and HT showed unpredictably good performance against termites. Tannins may be acting to denature proteins; in that case, fungal enzymes would be inhibited. This study revealed the importance of HT on a mixture of boron and tannins to decrease boron leaching and increase the durability of preservative systems. View Full-Text
Keywords: heat treatment; DOT; tannins; leaching; termites; fungi heat treatment; DOT; tannins; leaching; termites; fungi
►▼ Show Figures 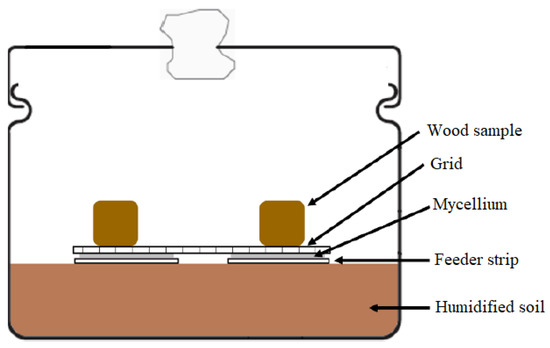