The Influence of Urban Conditions on the Phenology of Aesculus hippocastanum L. Using the Example of Wroclaw (Poland)

There are numerous studies around the world showing the impact of urbanization and global climate change on the environment [1,2,3,4,5,6,7,8,9,10,11]. Urban conditions can significantly influence plant phenology by modifying the hydrological regime or the local climate [12]. Škvareninová et al. [13] or Ffrench-Constanti et al. [14] also proved the influence of artificial lighting on the phenology of urban plants. Ballester et al. [15], Seto et al. [16] and Klemm et al. [17] showed that urbanized regions can be much warmer than the surrounding rural regions, creating a so-called urban heat island (UHI). McCarthy et al. [18] or Oleson et al. [19] emphasize the topicality and importance of research on UHI and related aspects, especially because the percentage of the world’s population inhabiting urban areas is increasing and high temperatures can affect the thermal comfort and well-being of the urban inhabitants [20]. Cities are an important area of phenological research because their warmer conditions can help to assess the potential effects of climate change on plants [4,21,22]. Temperature trend analyses over 100 years in some cities in the United States showed that the temperature in urban areas from 1940 to 2000, increased by an average of 0.5–3.0 °C [23]. Cardelino and Chameides [24] showed that in Atlanta, in the 15 years to 1990, there was an increase in air temperature of about 2 °C during the summer period due to the progressive urbanization and the accompanying intensification of the urban heat island. Increasing thermal contrast between the city center and the city peripheries was also noted in European countries, including in Athens [25] or in London [26].
However, little is known about the spatial and temporal variability of plants as a result of the interaction between urban conditions and UHI [27]. The increase in temperature caused by the urban heat island affects the phenology of plants both within and around cities [28,29,30,31], unfortunately, the ecological impact of urban heat island remains poorly understood in scientific research [27,31,32].
The differences in plant phenology between rural and urban areas are the subject of research conducted all over the world, both in Europe [10,21,29,30,33,34] and in North America [12,33,34,35,36], South America [30], Asia [33,37,38,39] or Africa [33]. However, these studies, which are mainly based on the observations of one or several species, do not aim to capture the variability within cities [21,40]. There are few studies aimed at assessing the impact of the urban heat island on plant vegetation only in urban areas [23,27,34,41].
Due to the difficulty and time consuming nature of conducting phenological observations, many researchers rely on satellite remote sensing to investigate spatial variability [27,35,42], limiting themselves only to capturing the beginning and end of the growing season. Moreover, these studies omit the assessment of the influence of city geometry, land use or tree growth conditions on their phenology, which is an important gap in phenological research, as emphasized by Jochner et al. [29] and Walker et al. [43], basing their observations on only one type of space, for example, forest areas, as did Fisher et al. [44] or Elmore et al. [42]. On the other hand, Zipper et al. [27] took into account two types of areas—wooded and sodded areas. Taking into account the spatial aspect is of particular importance in the context of the results of Yang et al. [45] or Masiero and Souza [46], showing the influence of the type of urban area on thermal conditions.
The aim of this study is to assess the impact of the distance from the city center and the form of land cover (surrounding area) on the phenological development of trees using the example of the horse chestnut (Aesculus hippocastanum L.).

Wrocław is located in south-western Poland, in the center of the Silesian Lowland (51_ N, 17_ E) on the Odra River and its four tributaries (Figure 1). It is the historical capital of Silesia and Lower Silesia. The altitude above sea level ranges from 105 to 145 m. The city has approximately 640,000 inhabitants and its area is 293 km2, including 31.4% built-up areas, 36.6% green areas and 28.9% agricultural areas and water (3.1%).
Wrocław is located in the temperate climate zone of the northern latitude, in a transitional type of climate, subject to oceanic and continental influences. The average annual air temperature in Wrocław is 9.0 °C, with lows in the coldest month (January) of around −0.4 °C and highs in the hottest month (July) of around 18.8 °C. The amplitude of the annual temperature, which is a measure of the degree of climate continentalism, is 19.2 °C. Atmospheric precipitation occur on 167 days a year and the average annual rainfall in the years 1901–2000 is 583 mm [47]. The vegetation period in Wrocław in the years 1951–2014 was 237.6 days on average and the sum of active temperatures was 174.4 days, which qualifies Wrocław as one of the cities with the longest vegetation period in the south-western Poland [48].
In the year 2017, from March to September, the mean monthly air temperature values for each month were higher than the mean air temperature value for the years 1951–2017 (Figure 2a). In the summer months, from June to July, these values were even 7 °C higher. On the other hand, November, December and January were characterized by lower average air temperature values compared to the multiannual period average.
In April and July 2017, monthly rainfall totals were much higher than the average values of the compared multiannual period (Figure 2b). Moreover, higher precipitation has been documented in September and October. On the other hand, lower rainfall totals were recorded in May; they were more than three times lower in comparison (approx. 18 mm) than the average value of the 1951–2017 period (60 mm). In the summer months, except for July, lower rainfall was recorded compared to the multiannual period average. Whereas, in March and February the rainfall was close to the mean values in terms of quantity.
The research area covered the entire city of Wrocław. In order to best capture the impact of the distance from the city center on the rate of changes of individual phenophases, 3 rays were designated (the pillory in the city center in Wrocław, 51°06′34.1′′ N 17°01′57.7′′ E, was taken as a reference point)—at a distance of 1 km (R1), 2 km (R2) and 5 km (R3). The rays were determined with regard to the structure and type of buildings, green areas and UHI temperature distribution developed for Wrocław by Szymanowski and Kryza [50]. These rays were determined in such a way that the first area covered the strict city center (zone 1—Z1), the second area was with dense historic quarter buildings (zone 2—Z2) and a third area with looser buildings and larger green areas (zone 3—Z3), which separated the zone with the lowest degree of development, with predominantly green areas (zone 4—Z4).

The horse chestnut (Aesculus hippocastanum L.), brought to Europe in the 16th century, is one of the most popular species used in urban areas [51]. It has been the subject of observation in many phenology-based studies [6,52,53,54,55,56,57,58,59,60]. The horse chestnut was chosen for our research as it is a species that occurs frequently in Wrocław, its morphology allows for a precise definition of phenological phases and it is of great environmental and aesthetic importance for the city and additionally, it is characterized by early phenology.
A total of 92 objects were selected for observation (Figure 1)—including 24 located in the central area—zone 1 (Z1), 21 objects between 1 and 2 km from the center (Z2), 24 facilities in the area from 2–5 km (Z3) and 22 objects located more than 5 km from the designated center (Z4). Moreover, when selecting the objects, the form of land cover on which the tested object is located was taken into account, distinguished as follows: green areas, high-rise areas (multi-family buildings with at least 4 storeys were assumed to be high-rise buildings) and areas near communication routes and water courses and reservoirs (Table 1)—in determining the forms of land cover, the Urban Atlas was used [61]. All specimens were also selected taking into account their age—the units selected for the study had circumferences larger than 150 cm measured at a height of 130 cm above the ground and were of good phytosanitary condition.

Field observations were carried out weekly from 1 March 2017 to the end of November, 2017. In order for the assessment process to be objective, the assessment was made by one person on the basis of photographic documentation collected in the field, which included a photograph of the silhouette of the entire tree and details such as buds, leaves, inflorescences, fruits. We have attached an observation sheet as Supplementary Material (Table S1).
The phenological observations were based on BBCH (Biologische Bundesantalt, Bundessortenamt and Chemische Industrie) code after Finn et al. [62]. The BBCH scale has been applied so far in phenological observations of non-cultivated woody plant species Babálová et al. [63] in the studies on small-leaved linden, hawthorn, common hazel, blackthorn, by Lukasová et al. [64] examining the common beech or by Stratópoulos at al. [65]. A uniform method of presentation and determination of individual phenological phases was adopted, as specified in Table 2. For the purpose of our research, like in Delgado at al. [66] or Cosmulescu and Scrieciu [67], the BBCH scale has been modified—it has been extended to four new phases marked with an asterisk in Table 2.

The study assessed the average duration of individual phenological phases along with the variability characteristics for leafing, flowering and fruiting in relation to the designated zones and classified forms of land cover based on mean value () and standard deviation (±SD) in individual weeks of the year and Julian days.
Moreover, length estimates were performed for the vegetative phases of phenological development duration of individual phases in relation to each other. This length was determined based on the differences between the averaged dates of the observed phases of vegetative development.
In order to verify the statistical significance in relation to comparable groups of trees growing in the designated zones, the t- Student test was performed at the level of p < 0.05.
For the leafing and flowering phases (Ph1–Ph11), the frequency of the occurrence of phases in individual weeks of the year was analyzed in relation to the designated zones and classified land use methods.

3.1. Influence of Distance from the Centre on Phenological Development

3.2. The Impact of Land Use on the Pace of Phenological Development

3.3. Form of Land Cover and Distance and Their Influence on Phenology 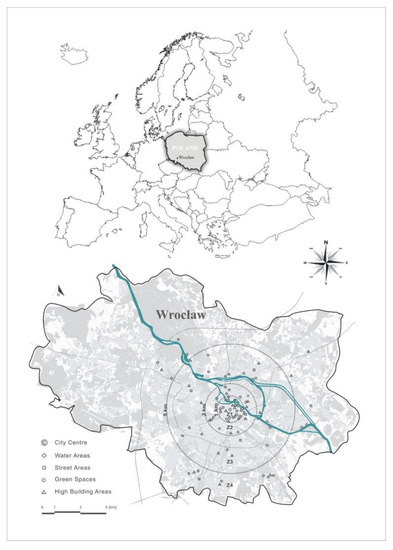 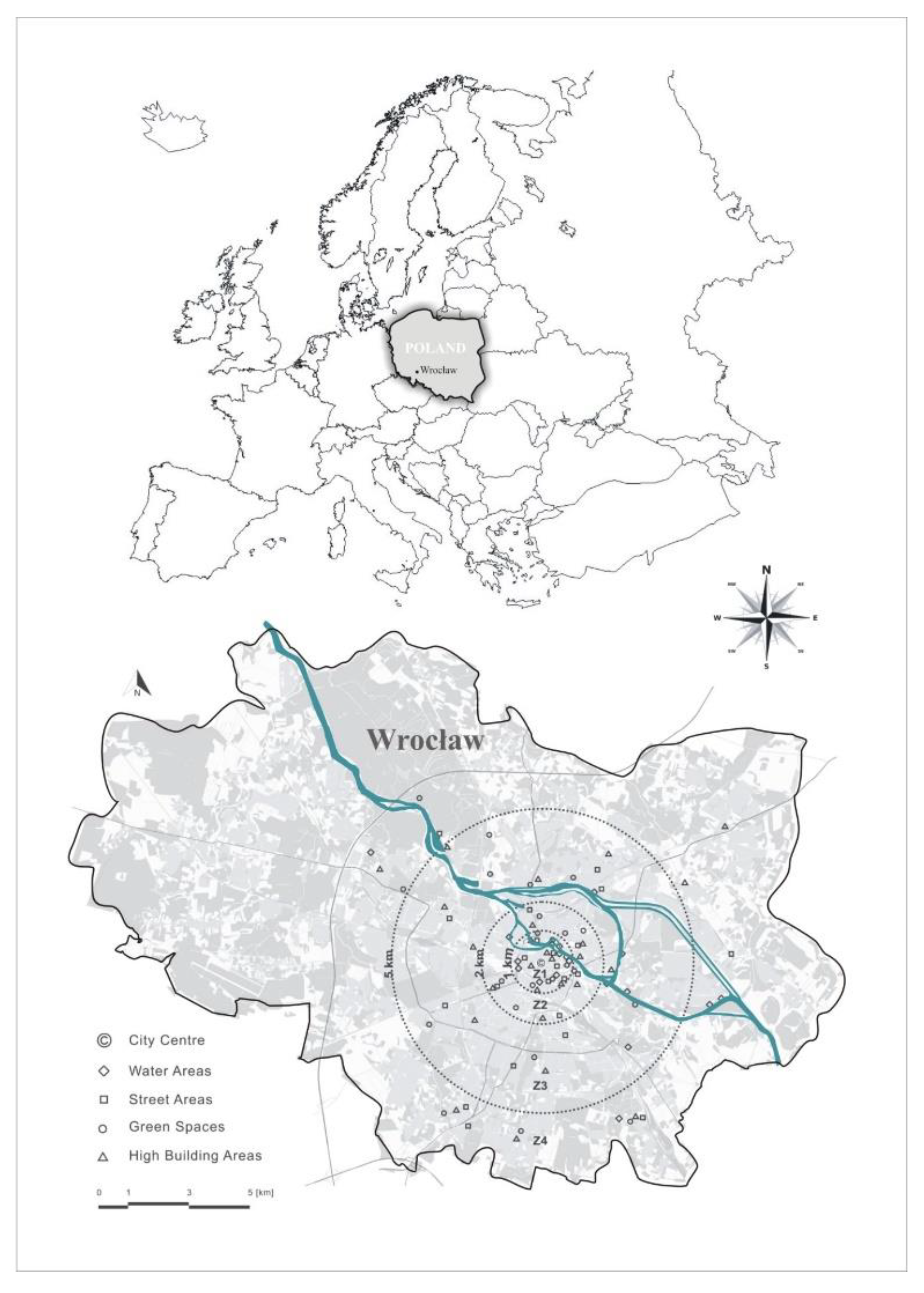 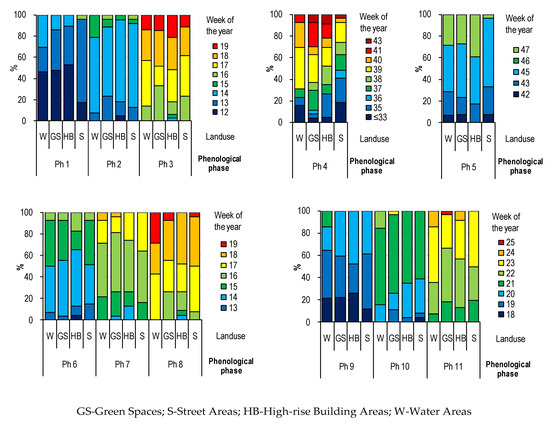