An Assessment of the Spatial Variability of Tropical Swamp Forest along a 300 km Long Transect in the Usumacinta River Basin, Mexico

The provision of valuable ecosystem services by tropical swamp forests (mainly carbon sequestration and storage in biomass and soil) explains their ecological importance. Current efforts toward the conservation of these ecosystems, however, face strong limitations as their spatial variation is largely unknown, particularly in regions where they occur over large areas. Here, we analyze the α-diversity (i.e., effective number of species or true diversity) and community structure variability of three tropical swamp forest communities distributed along an approximately 300 km long portion of the Usumacinta River Basin, southern Mexico. We sampled eighty-three 625-m2 plots to characterize the diversity and structural attributes of the woody plant communities. We recorded 2302 individuals belonging to 60 species and 25 families. Both α-diversity and structural attributes differed significantly among the three communities. The most inland community stood out for having the highest α-diversity for three true diversity values. Interestingly, the mangrove Rhizophora mangle L. was one of the dominant species, both in the swamp forest located closest to the coast and in the community farthest away from the sea. Basal area and density of individuals also had their maxima in the most inland swamp forest. The diversity and structural differences observed among the examined swamp forests seem to be related to contrasting environmental conditions, such as water salinity, distance to the coastline, and the hydrological dynamics of the Usumacinta River. We emphasize the urgency to conserve R. mangle populations in the swamp forest located farthest away from the coast due to its unusual habitat association, which appears to be a relictual condition. View Full-Text
Keywords: forest structure; plant species conservation; Rhizophora mangle; San Pedro y San Pablo River; wetland forest forest structure; plant species conservation; Rhizophora mangle; San Pedro y San Pablo River; wetland forest
►▼ Show Figures 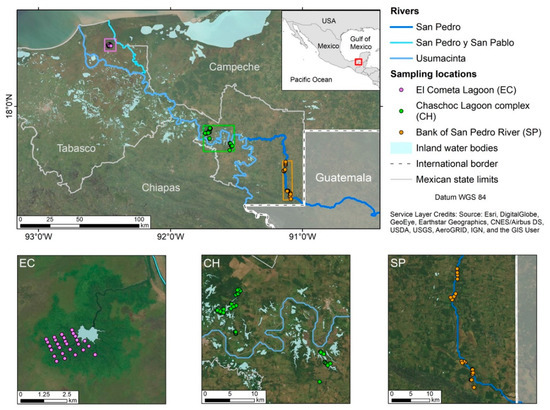