Identification of an Emaravirus in a Common Oak (Quercus robur L.) Conservation Seed Orchard in Germany: Implications for Oak Health
Next Article in Special Issue

Functional Divergence between Várzea and Igapó Forests: A Study of Functional Trait Diversity in the Colombian Orinoco Basin

Research Highlights: As to fill the current knowledge gap and to deliver important findings to the scientific community, efficient sulfur recovery from black liquor gasifier syngas, comprising both gas cleaning and returning sulfur to the pulping process, was modeled and assessed from a techno-economic viewpoint. This manuscript proves that the associated investment and operational costs cannot be neglected and that they impact the black liquor gasification feasibility significantly. To prove its gasification as a sustainable and more efficient processing route over its combustion in recovery boilers, a substantial process efficiency improvement and operating costs reduction must be targeted in future research. Background and Objectives: Sulfur compounds found in black liquor partly turn into hydrogen sulfide during gasification and exit the gasifier in the syngas. Their efficient recovery in their sulfidic form to the pulping process is of utmost importance. Current studies focus on black liquor gasifier syngas desulfurization only. Materials and Methods: A mathematical model of two H2S absorption units from a 66.7 tDS/h (1600 tons dry solids per day) black liquor gasification process to 20 ppm H2S content in cleaned syngas using either white liquor plus NaOH or N-methyldiethanolamine (MDEA) was created using the Aspen Plus simulation software. Results: The results show that CO2 co-absorption significantly increases the lime kiln load: +20% in the MDEA alternative and +100% in the other one. The MDEA alternative requires almost the same investment costs but by around USD 9.7 million (>50%) lower annual operating costs compared to the other one. Economic evaluation was based on the assumed discount rate of 5% and on the expected plant operation time of 25 years. The estimated total investment cost of the whole plant is around USD 170 million for both alternatives. The whole plant including this alternative exhibits a positive net present value (over USD 19 million), an internal rate of return of 5% and a profitability index of 1.12, whereas that with the other alternative is economically infeasible. Conclusions: The MDEA-based syngas cleaning technology represents a more efficient and economically feasible option of sulfur recovery. A major drawback of both modeled syngas cleaning technologies is that their estimated annual operating costs significantly reduce the expected profit margin of gasification over the traditional black liquor combustion in a recovery boiler. Syngas cleaning and sulfur recovery have to be further optimized to reach a significant cut down in operational costs to improve the economic feasibility of black liquor gasification. View Full-Text
Keywords: black liquor; gasification; syngas cleaning; sulfur recovery; operating costs black liquor; gasification; syngas cleaning; sulfur recovery; operating costs
►▼ Show Figures 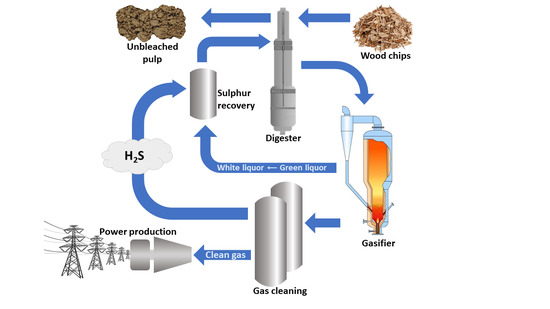