DNA methylation plays a vital role in diverse biological processes. DNA methyltransferases (DNMTs) genes and RNA-directed DNA methylation (RdDM)-related genes are key genes responsible for establishing and maintaining genome DNA methylation in plants. In the present study, we systematically identified nine GbDNMTs in Ginkgo biloba, including the three common families of GbMET1a/1b, GbCMT2, and GbDRMa/b/2a/2b/2c, and a fourth family—GbDNMT3—which is absent in most angiosperms. We also identified twenty RdDM-related genes, including four GbDCLs, six GbAGOs, and ten GbRDRs. Expression analysis of the genes showed the different patterns of individual genes, and 15 of 29 genes displayed expression change under five types of abiotic stress. Gene coexpression analysis and weighted gene co-expression network analysis (WGCNA) using 126 public transcriptomic datasets revealed that these genes were clustered into two groups. In group I, genes covered members from all six families which were preferentially expressed in the ovulate strobile and fruit. A gene ontology (GO) enrichment analysis of WGCNA modules indicated that group I genes were most correlated with the biological process of cell proliferation. Group II only consisted of RdDM-related genes, including GbDRMs, GbAGOs, and GbRDRs, but no GbDCLs, and these genes were specifically expressed in the cambium, suggesting that they may function in a dicer-like (DCL)-independent RdDM pathway in specific tissues. The gene module related to group II was most enriched in signal transduction, cell communication, and the response to the stimulus. These results demonstrate that gene family members could be conserved or diverged across species, and multi-member families in the same pathway may cluster into different modules to function differentially. The study provides insight into the DNA methylation genes and their possible functions in G. biloba, laying a foundation for the further study of DNA methylation in gymnosperms. View Full-Text
Keywords: DNA methylation; gene family; WGCNA; Ginkgo DNA methylation; gene family; WGCNA; Ginkgo
►▼ Show Figures 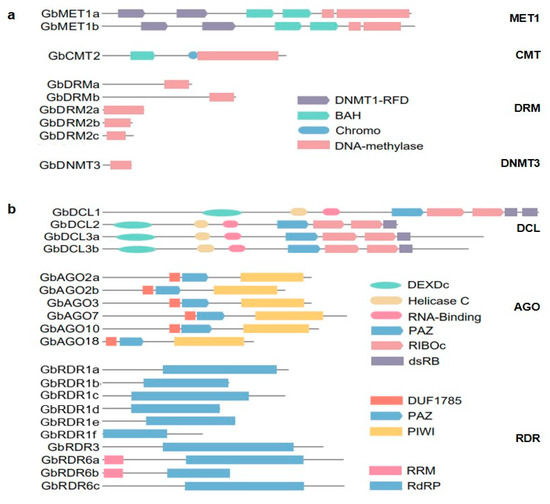