Occurrence of European Mistletoe (Viscum album L.) on Forest Trees in Poland and Its Dynamics of Spread in the Period 2008–2018
Previous Article in Special Issue

Among others the main objectives of chemical modifications of wood are to improve dimensional stability and resistance against wood-decaying fungi in order to offer an alternative to tropical hardwoods. The modification may, however, also cause undesirable changes of other wood characteristics, mainly elasto-mechanical properties. The reasons why chemical modification systems influence biological and physical properties of wood have been the subject of numerous studies [1,2,3,4]. There is still a lack of knowledge about the mode of action of the resins. However, mechanisms via which impregnation modifications work according to Hill [5] are: (1) permanent swelling by incorporating the resin in the cell wall structure (bulking); (2) moisture content is reduced; (3) cell wall pores with a size of 2–4 nm are blocked and it is assumed that a chemical reactions between modification agents and cell wall polymers (cross-linking) occurs.
Impregnation modifications based on reactive resins have been shown to result in embrittlement of wood [6,7,8]. The embrittlement is most evident in a decrease of tensile properties and dynamic strength properties like impact bending strength [9,10].
Studies have shown that a treatment with melamine-formaldehyde (MF) resin, besides providing decay resistance and dimensional stability, increases compressive strength and hardness, while decreasing tensile and impact bending strength compared to untreated wood [11,12,13].
As early as the 1930s, Stamm and Seborg [7] modified wood with phenol-formaldehyde (PF) resins and thereby enhanced the dimensional stability as well as the durability of the wood. Bicke et al. [9] found bending strength and modulus of elasticity in bending of plywood increased after modification with a PF-resin. At the same time, the impact bending strength decreases. Alike modification with MF-resins, tensile strength of wood modified with PF-resins also exhibits a lower tensile strength [14]. Furuno, Imamura, and Kajita [15] as well as [16] examined the influence of the molecular weight of the PF-resin on its ability to penetrate the wooden cell wall using microscopy. They stated that, with an increase of the molecular weight, a higher share of the resins remained in the cell wall lumen.
It has been shown that wood modification with dimethylol dihydroxyethyleneurea (DMDHEU) increases resistance against wood decaying fungi, dimensional stability, compressive strength, and hardness while reducing tensile and impact bending strength [6,17,18,19]. Bollmus [20] showed that wood modification with DMDHEU causes a large reduction of the impact bending strength already at a very low concentration of 0.5%.
In this study, the influence of modifications with curing resins on the most susceptible elasto-mechanical properties was examined. In addition to tensile strength and impact bending strength, work to maximum load in traction of modified wood was investigated in order to be able to compare tensile and dynamic bending properties. Four different modification systems were applied in three different concentrations to Scots pine sapwood.
The main objectives of this study were to investigate the impact of (1) the concentration of the modification solution and (2) the modification agent itself on impact bending strength, tensile strength and work to maximum load in traction.

Specimens that were warped or showed cracks after modification were excluded, which lead to different numbers of specimens. All specimens were conditioned at 20 °C and 65% RH before testing.

Impact bending strength ω was tested with the hammer method (load of XXXJ) in tangential direction following DIN 52 189-1 [21] by means of dynamic impact bending tests. The specimen dimensions were deviant from the standard 10 × 10 × 150 mm³. The tests were performed using the Resil Impactor (CEAST) with a supporting width of 115 mm. Numbers of specimens varied between 23 and 37 (Table 3). where ω = impact bending strength, kJ/ m²; = work necessary to break the specimen, J; = height of conditioned specimen, mm; = width of conditioned specimen, mm.

2.6.2. Tensile Strength Parallel to Grain and Work to Maximum Load in Traction

Figure 2 shows an increasing WPG with increasing concentration for each modification agent tested. Modifications with 0.5% solutions of both phenol-resins and DMDHEU led to negligible WPG values of less than 0.6%. The highest WPG (ca. 39%) was caused by the lower molecular weight Phenol1 at a concentration of 20%. There was no clear difference in the WPG between smaller impact bending specimens and larger tensile specimens (slats) which demonstrates good penetration into wood species.

Tensile strength parallel to grain of control specimens was within the range [26] stated for Scots pine (35…104…196 N/mm²). Modified specimens showed lower tensile strength values than control specimens (Table 6). The values decreased with increasing concentrations of the agents. The strongest decrease was observed in the specimens modified with DMDHEU (51%). Other authors also found the tensile strength of chemically modified wood to be reduced [9,13,29].
Modified specimens exhibited significantly lower values of work to maximum load in traction than control specimens (Table 7). For each modification, values decreased with increasing concentrations of the modification agents. Similar to impact bending strength, specimens modified with 0.5% solutions already showed a significant decrease in the work to maximum load in traction of up to 36% (Phenol1). Again, the strongest decrease over-all was observed in the specimens modified with DMDHEU (81%).
In contrast to results from impact bending tests, both and maximum strain in traction were reduced with increasing concentrations of each agent (Figure 5).
Tensile properties are mainly determined by the properties of the single cellulose fiber [23,30]. Tests among others by [19] suggest that chemical modification reduces tensile properties of the fibers by embrittlement as a result of deposition of the agent in the fiber cell walls.

This study investigated the influence of four chemical modification agents (MF, Phenol1, Phenol2, DMDHEU) in three concentrations (0.5%, 5%, 20%) on impact bending strength, tensile strength, and work to maximum load in traction of Scots pine. The main findings were:
The results show that in the application of chemically modified wood, impact and tensile loads should be avoided even after treatment with low concentrations.

This research was funded by the German Federal Ministry of Food and Agriculture through the Agency for Renewable Resources (FNR) grant number FKZ 22024211. 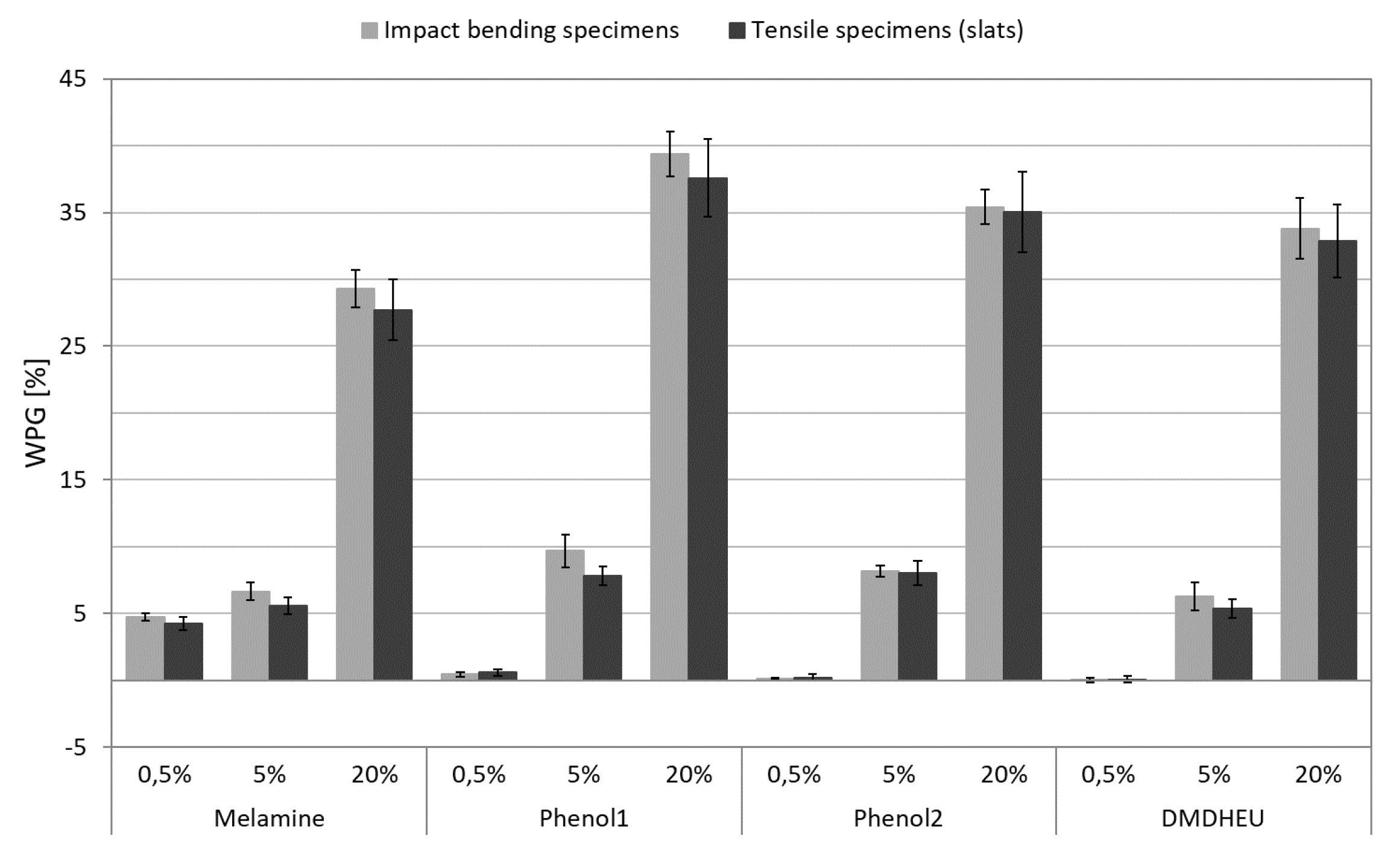 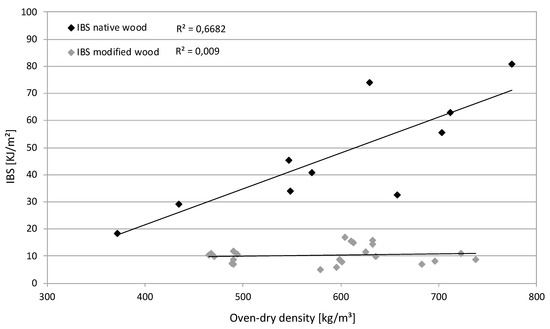 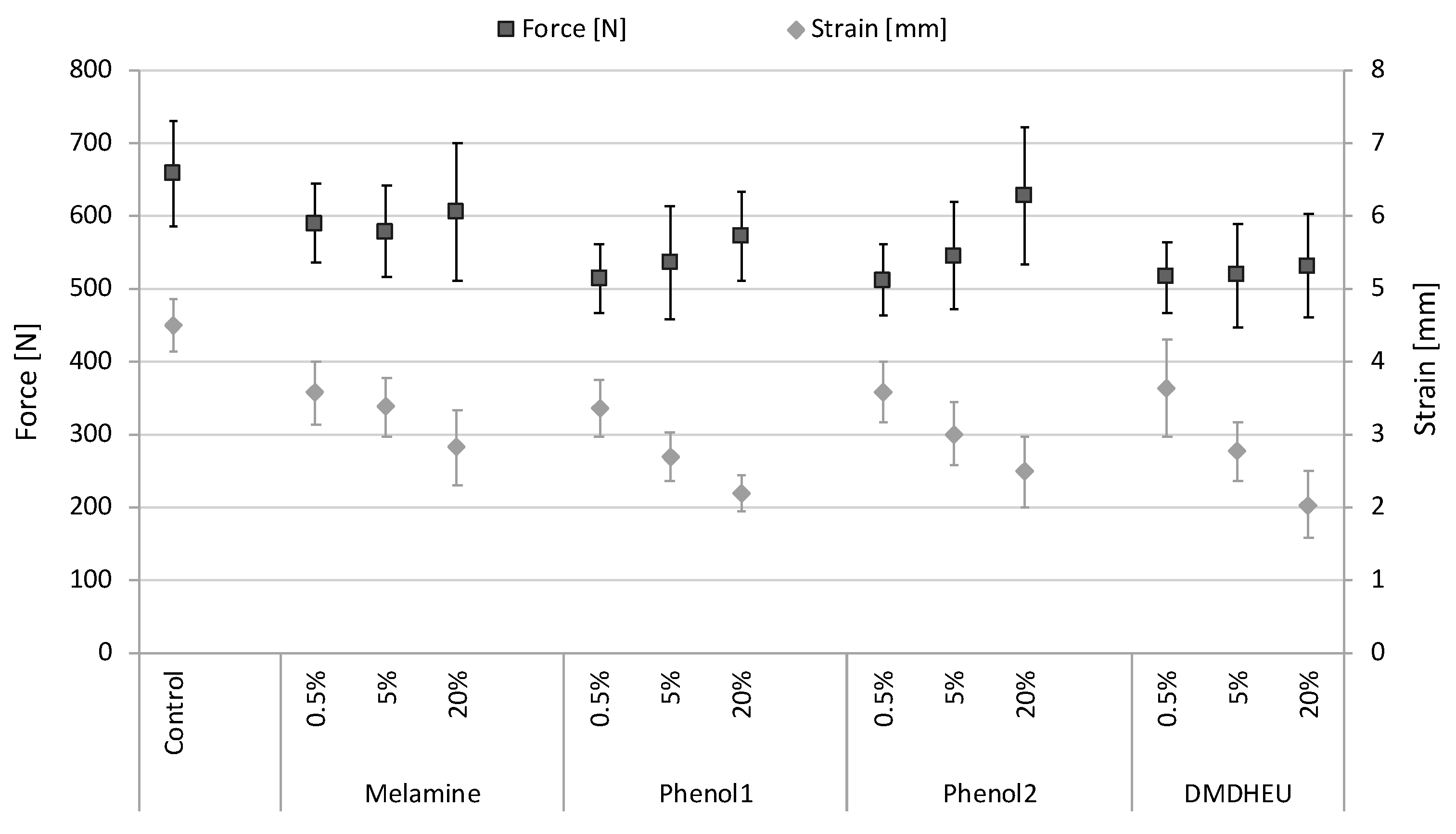 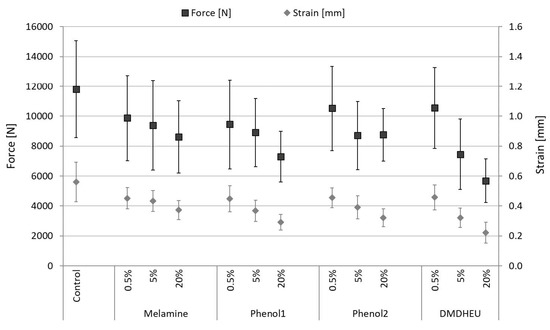