Dynamics of Abies nephrolepis Seedlings in Relation to Environmental Factors in Seorak Mountain, South Korea
Next Article in Special Issue

Data were collected from ten sites along 100 m transects. One site was located along a windbreak composed of loblolly pine (Pinus taeda L.) trees (N = 52) at the University of Florida (UF) Gulf Coast Research and Education Center in Wimauma, FL (~27°45′40″ N and ~82°13′40″ W). The remaining nine sites were randomly selected 100 m sections of right-of-way along designated hurricane priority routes within Tampa, FL (27°57′50.97″ N, 82°27′9.38″ W). The windbreak site provided relatively uniform conditions to test the photogrammetric set-up (e.g., non-occluded stems, relatively circular pine stems, uniform light conditions, etc.), while the urban sites represented a greater range of challenges to the set-up and post-processing. The spacing of urban stems was sparser along urban right-of-ways, requiring more study area to test the proposed set-up under a variety of heterogeneous urban conditions and achieve a comparable sample size. The street trees (N = 88) representing the urban sites included Quercus virginiana Mill. (31.5%), Quercus laurifolia Michx. (27.0%), Washingtonia robusta H.Wendl. (11.2%), Ulmus parvifolia Jacq. (7.9%), Acer rubrum L. (4.5%), Sabal palmetto (Walt.) Lodd. (4.5%), Prunus caroliniana (Mill.) Aiton (4.5%), Pinus elliottii Engelm. (3.4), Syagrus romanzoffiana (Cham.) Glassman (3.4%), Quercus laevis Walter (1.1%), and Dalbergia sissoo Roxb. (1.1%). Stem DBH measurements were collected with a DBH tape as a control. Control measurements for stem position were visually interpreted from very high resolution (i.e., 0.65 m) orthoimages originally captured from the QuickBird satellite (DigitalGlobe, Inc., Longmont, CO, USA). However, some stems were occluded by canopy, so objects (e.g., street signs, light poles, fire hydrants, transformer boxes, etc.) or conspicuous ground features (e.g., sidewalk cracks, road markers, etc.) in the field were used as ‘anchor points’ to measure compass heading direction and distance with a laser rangefinder (TruPulse 200—Laser Technology Inc., Centennial, CO, USA). These measurements could then be used to approximate the occluded stem position from the visible ‘anchor point’ within a GIS (specifically, Google Earth) using the ruler tool to interpret heading and distance. An additional set of coordinates were measured with a handheld GPS unit with a circular error probability of 1–1.5 m (GNSS Surveyor—Bad Elf, LLC, Tariffville, CT, USA) to also include geospatial positional measurements often taken during standard tree inventories as a comparison.
Imagery for photogrammetric data was collected with two stereoscopic camera set-ups. The stationary camera set-up used a surveying rod to secure a digital single-lens reflex (DSLR) camera (Canon EOS Rebel T3—Canon Inc., Tokyo, Japan). Two passes along the transect were made to ensure high overlap between different tree positions—a pass with the camera mounted on a surveying rod at 1.6 m and tilted downward at a −25° angle, and another at 2.0 m at a −30° angle. In this manner, data collection simulated a two camera photogrammetric set-up (Figure 1). Images were captured at ~0.33 m intervals along each transect pass. Similarly, the mobile photogrammetric set-up utilized a two DSLR camera (Nikon D300—Nikon Co., Tokyo, Japan) system for image capture along the sampled right-of-ways (ROW; i.e., publicly-managed corridor) areas. The mobile set-up was similar to the system used by Abd-Elrahman et al. [55] and Abd-Elrahman et al. [56], where a second DSLR camera was used to replace the hyperspectral camera used in the original system. The mobile images were collected in concert with a similarly-positioned survey-grade (i.e., centimeter-level) GPS unit (Hyperlite+, Topcon Corp., Tokyo, Japan) and a timing GPS antennae (Accutime Gold™, Trimble Navigation Ltd., Sunnyvale, CA, USA), in order to retroactively assign coordinate metadata to each image in post-processing (Figure 2). Similar to the stationary set-up, the cameras were positioned at 1.6 m and tilted downward at a −25° angle and 2.0 m at a −30° angle. Mobile images were also captured along straight sections of road moving in the direction of traffic at every ~0.33 m for adequate image overlap, which required the vehicle to travel at ~10 km/h over 3 separate passes with the utilized camera settings. High overlap (Equation (1)) is needed for photogrammetric camera positioning.
Overlap = (G − B)/G
where B is the distance between photos (i.e., orthogonal to the direction that the camera is aimed) and G is photo coverage in the direction of camera movement. Photos were taken at ~0.33 m intervals, hence, photos ranged between 83 and 96% overlap based on the distances of trees from the roadway camera position, ranging from 2 m to 8.5 m, respectively.

All datasets were processed with close-range, photogrammetry software, (Photoscan Professional, AgiSoft LLC, St., Petersburg, Russia) to generate 3D models. Mobile datasets utilized kinematic GPS data post processing to assign image positions based on synchronized timing from camera metadata and GPS (Figure 2). The resulting point clouds were already georeferenced and suitable for use within supporting GIS programs. Stationary datasets were not georeferenced, but the scale was established via a measuring ruler with control point marks of known distance. The mobile imagery utilized the coordinates taken from the geodetic grade GPS receiver, which allowed the position of each photo location to be set, and photogrammetrically aligned, prior to point cloud generation. Vertical sections of the stems were excised from the point clouds via hand measurement at approximately 1.4 m above the ground with the “point selection” tool in CloudCompare. The “point selection tool” was then also used to manually measure diameter from stem sections with the “point selection” tool by measuring the distance of points representing one side of the stem to points along the opposite side.

All data were analyzed in the Microsoft Excel [57]. Similar to previous publications that assessed the accuracy of modeled vegetation, root mean square error (RMSE) (Equation (2)) and bias (Equation (3)) were used to test model accuracy of DBH [46].
These equations were executed with the number of estimates (n), the value estimated by the models (), and the physical measurement (). A linear regression analysis was also used to compare DBH measurements derived from close-range photogrammetry to their physical measurements with the lm() function in R (www.r-project.org).

Both stationary and mobile measurements for DBH showed high conformity to their corresponding field measurements. The windbreak site showed an R2 value of 0.92 for stationary data and 0.95 for mobile data, while urban sites showed an R2 value of 0.98 for both stationary and mobile datasets (Figure 3).
Similarly, RMSE values showed relatively low error regardless of mobile or stationary treatment method and type of site. The windbreak site had very similar RMSE values of 1.24 cm (8.70%) and 1.06 cm (7.43%) for stationary and mobile datasets, respectively (Table 2). The urban sites had RMSE values of 2.81 cm (10.37%) and 2.18 cm (8.02%) for stationary and mobiles sites, respectively (Table 2).
Stationary-photographed urban stems showed a slightly greater bias at −1.80 cm (−6.64%), but the mobile urban bias was almost half that, at −0.98 cm (−3.60%) (Table 2). Bias for stems measured in windbreak sites was −0.54 cm (−3.78%) and −0.56 (−3.93%). Bias was consistently negative for all classifications and suggested the photogrammetric process, either in the point cloud generation or DBH mensuration routine, may lead to underestimation of DBH (i.e., −3.6% to −6.64%).

This research has demonstrated that close-range mobile terrestrial photogrammetry can be used for the purposes of mapping and basic tree measurements for inventory purposes. Modeled stem diameters correlated well with physical measurements. Tree position also compared favorably to observed coordinates from a handheld GPS unit. Mobile laser scanning has been an increasingly utilized technique for surveying roadways, and despite certain limitations to mobile photogrammetry (i.e., typically less model coverage, lack of superficial penetration, susceptibility to various sources of photogrammetric noise, typically denser datasets, etc.) the lower cost of cameras relative to LiDAR units and the relative ease of camera operation and image processing can provide an alternative to mobile laser scanning when certain advantages of mobile LiDAR are not necessary. The possibility that these terrestrial photogrammetric datasets can be merged with those from an aerial perspective may allow for more encompassing datasets for other tree measurements, advanced GIS analyses of roadside vegetation, and the inspection of other types roadside infrastructure. Comparison to mobile laser scanning, streamlining of data acquisition and processing, tests with other forest environments and inventory methods, and the automation of measurements from photogrammetric point clouds can provide further avenues to build on this research.

The authors would like to thank Drew McLean and H. Andrew Lassiter for their assistance and insight on this project. Financial support was partially provided by the University of Florida-IFAS Center for Landscape Conservation and Ecology and the Garden Club of America Zone VI Fellowship in Urban Forestry. 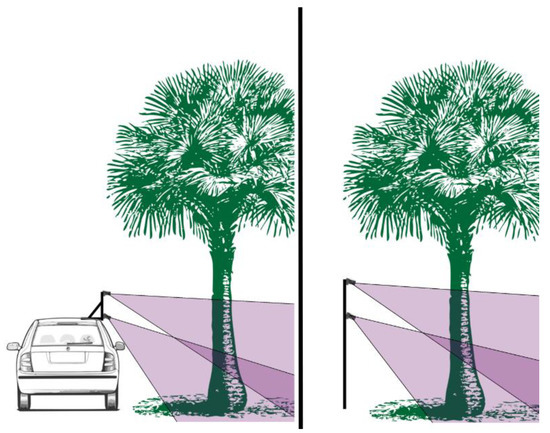 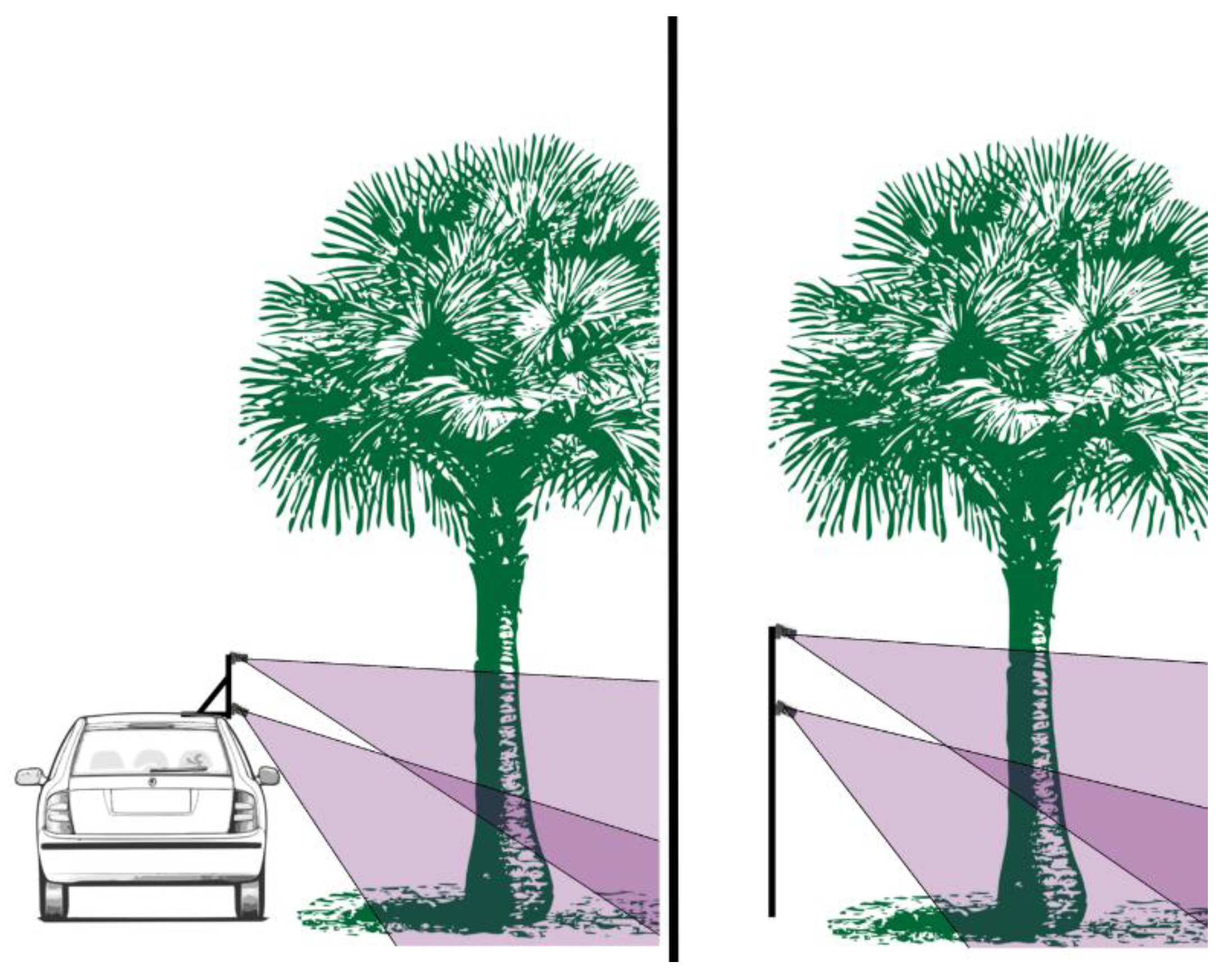 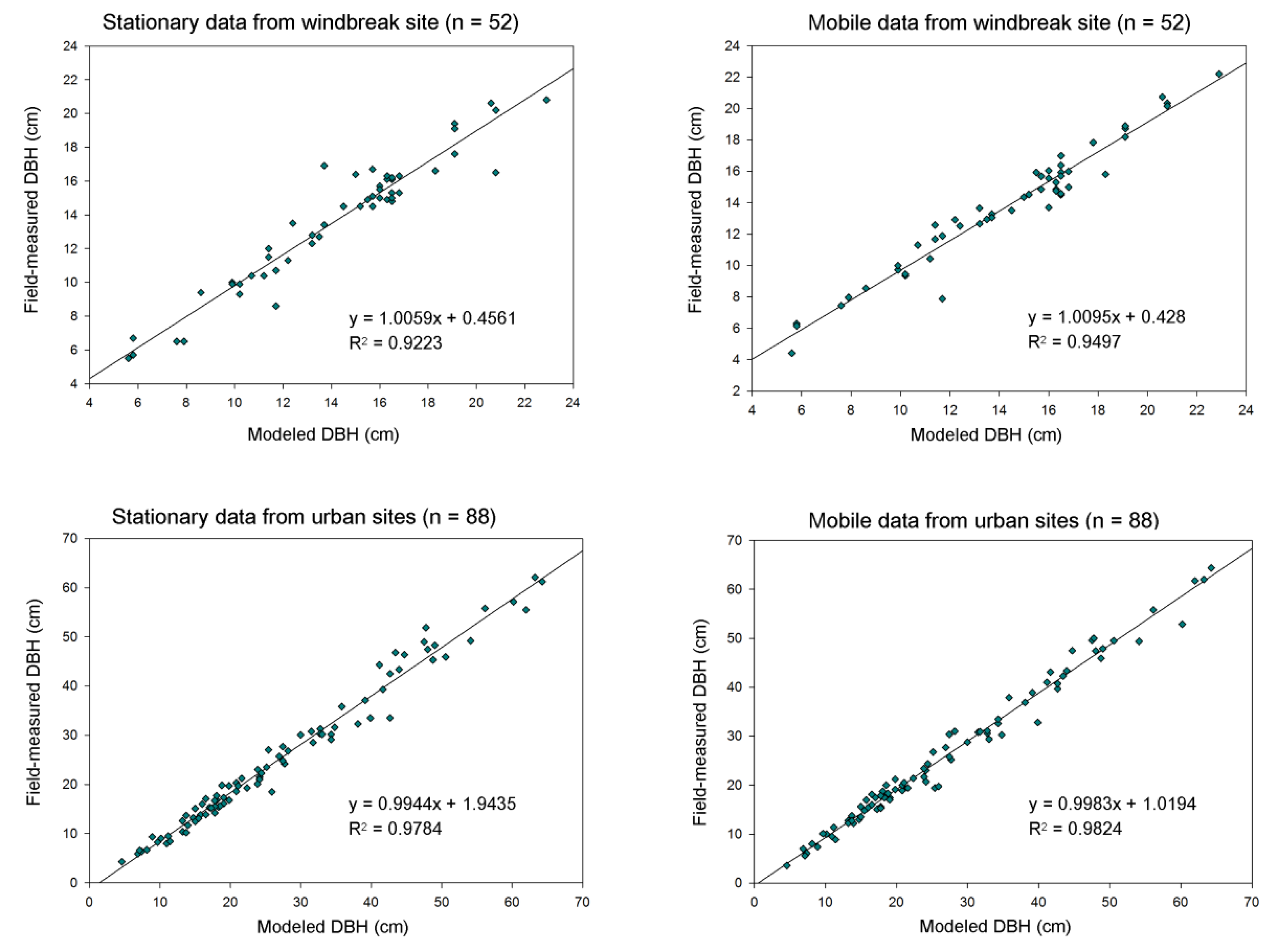 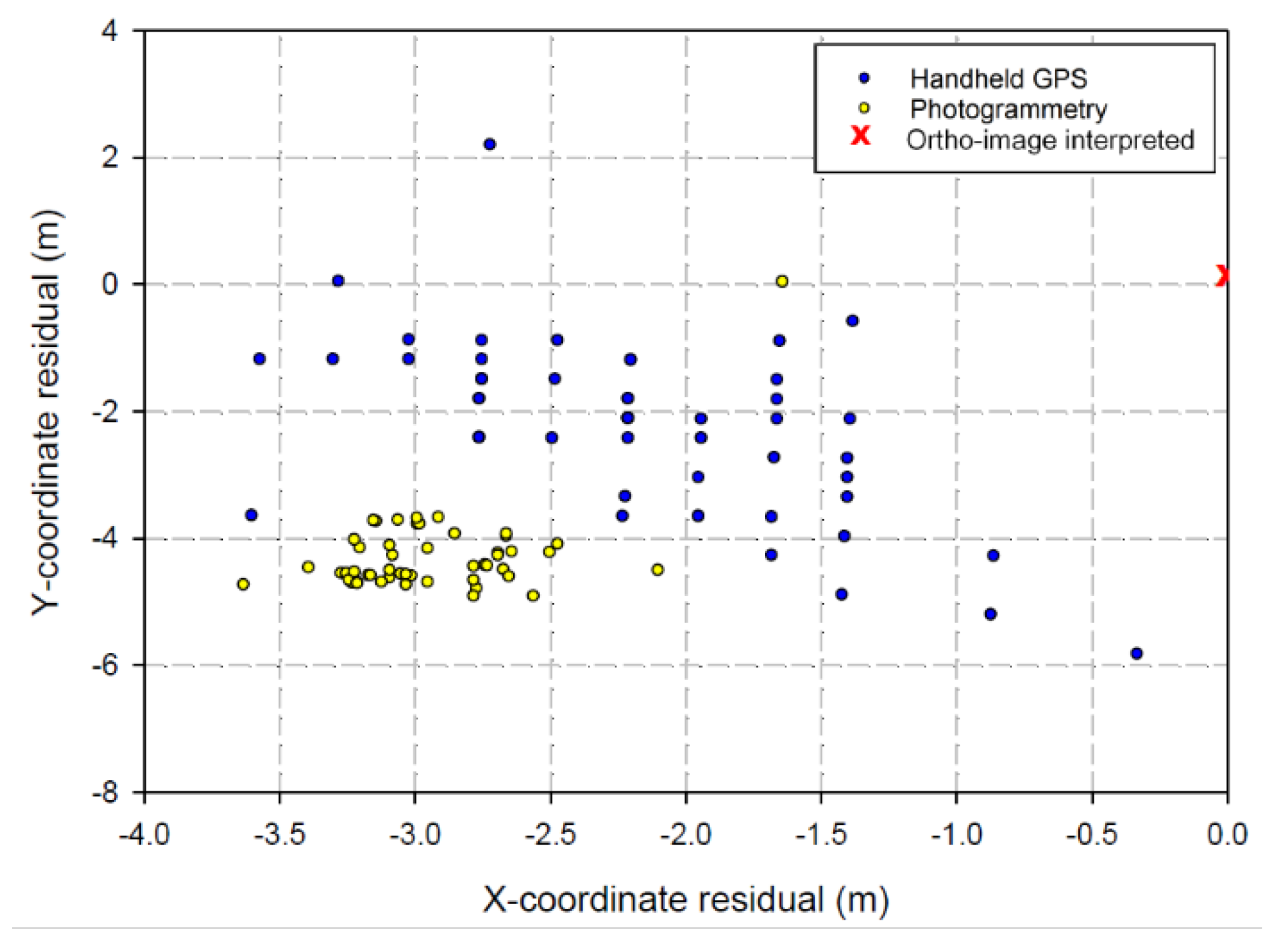 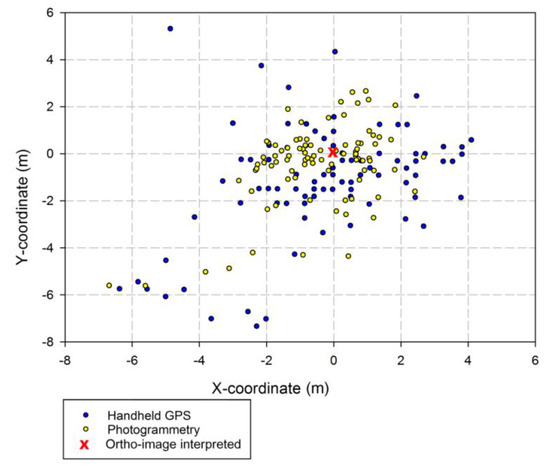 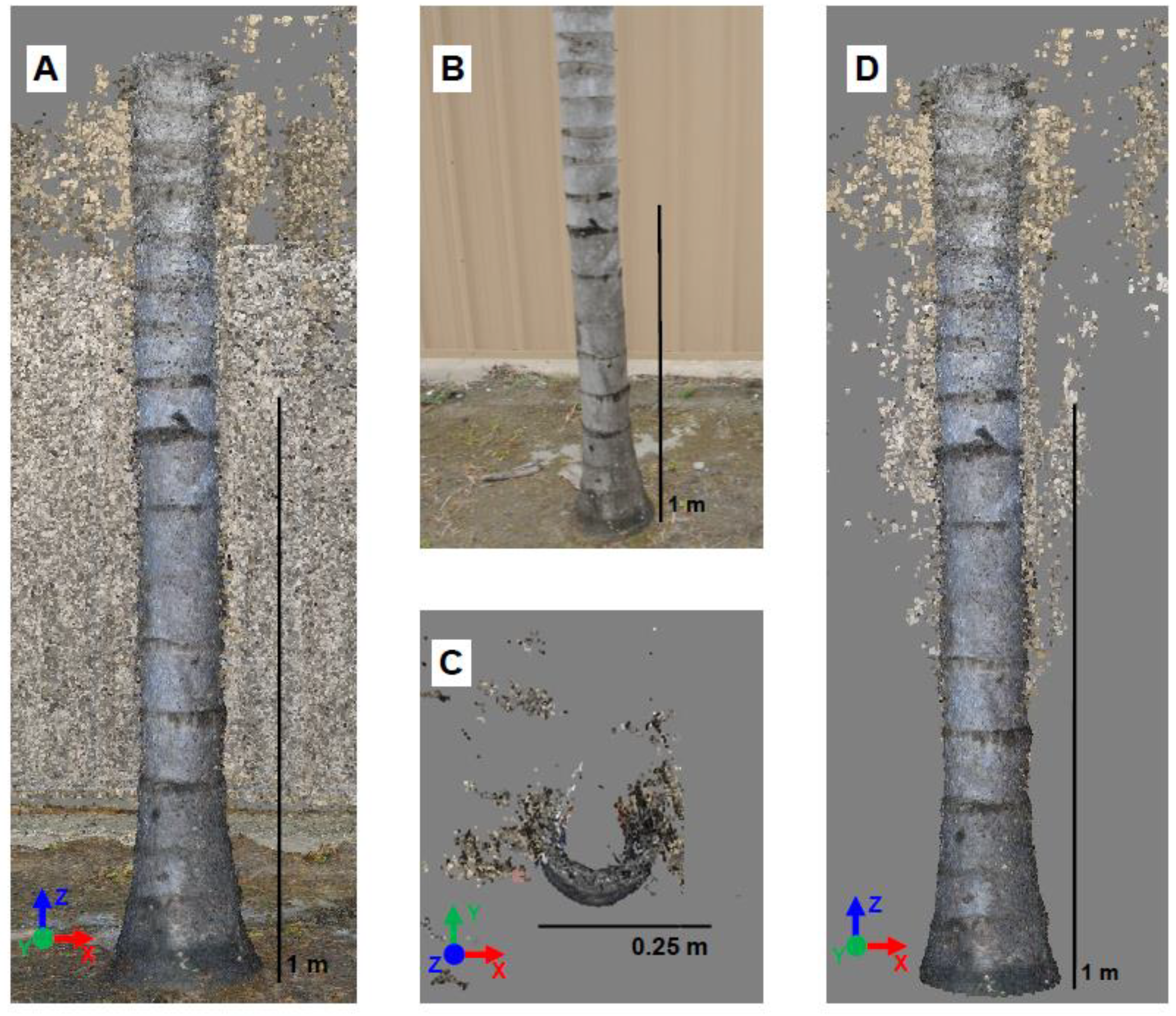