Differentiation and Non-Linear Responses in Temporal Phenotypic Plasticity of Seasonal Phenophases in a Common Garden of Crataegus monogyna Jacq.
Next Article in Special Issue

Advances in high-performance computer resources and exploitation of high-density terrestrial laser scanning (TLS) data allow for reconstruction of close-to-reality 3D forest scenes for use in canopy radiative transfer models. Consequently, our main objectives were (i) to reconstruct 3D representation of Norway spruce (Picea abies) trees by deriving distribution of woody and foliage elements from TLS and field structure data and (ii) to use the reconstructed 3D spruce representations for evaluation of the effects of canopy structure on forest reflectance simulated in the Discrete Anisotropic Radiative Transfer (DART) model. Data for this study were combined from two spruce research sites located in the mountainous areas of the Czech Republic. The canopy structure effects on simulated top-of-canopy reflectance were evaluated for four scenarios (10 × 10 m scenes with 10 trees), ranging from geometrically simple to highly detailed architectures. First scenario A used predefined simple tree crown shapes filled with a turbid medium with simplified trunks and branches. Other three scenarios used the reconstructed 3D spruce representations with B detailed needle shoots transformed into turbid medium, C with simplified shoots retained as facets, and D with detailed needle shoots retained as facets D. For the first time, we demonstrated the capability of the DART model to simulate reflectance of complex coniferous forest scenes up to the level of a single needle (scenario D). Simulated bidirectional reflectance factors extracted for each scenario were compared with actual airborne hyperspectral and space-borne Sentinel-2 MSI reflectance data. Scenario A yielded the largest differences from the remote sensing observations, mainly in the visible and NIR regions, whereas scenarios B, C, and D produced similar results revealing a good agreement with the remote sensing data. When judging the computational requirements for reflectance simulations in DART, scenario B can be considered as most operational spruce forest representation, because the transformation of 3D shoots in turbid medium reduces considerably the simulation time and hardware requirements. View Full-Text
Keywords: terrestrial laser scanning; radiative transfer modelling; Norway spruce; 3D tree reconstruction; DART terrestrial laser scanning; radiative transfer modelling; Norway spruce; 3D tree reconstruction; DART
►▼ Show Figures 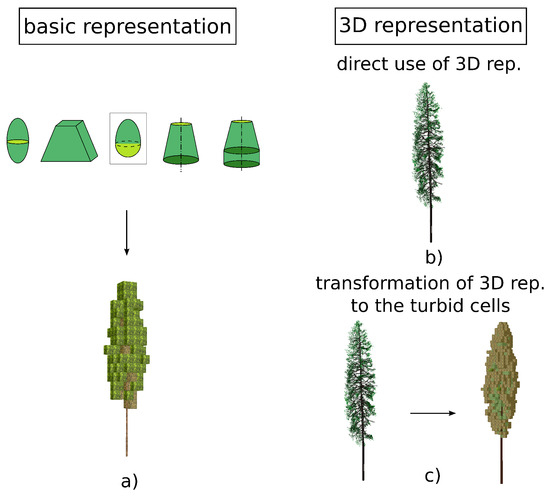