A northwest–southeast transect was selected from across the hinterland of the Loess Plateau (35.66–37.32° N and 106.18–111.92° E). The transect is a typical loess hilly region, with average annual precipitation, from 250 mm in the northwest, to 550 mm in the southeast. Due to its broad precipitation gradient, this region encompasses three vegetation zones from northwest to southeast (typical steppe zone, forest-steppe zone, and forest zone) [26]. The sampling sites were selected based on the precipitation gradient (Figure 1), which covered all of the primary regional climate conditions and afforested vegetation types. The broadleaved plantations in the area are sequentially dominated by C. korshinskii, H. rhamnoides, and R. pseudoacacia, spanning from the northwest to southeast. These trees were widely planted around the Loess Plateau due to their robust drought resistance, high survival rate, nitrogen fixation, and fast growth rate [6,12,23].

A paired experiment was conducted across the study region during the growing season (July 2016). Each site contained a plantation plot and a native grassland plot. The plantation was obtained from the three aforementioned tree species, and the stand ages, determined via the tree-ring method, were between 18–25 years. The native grasslands were dominated by bunge needlegrass (Stipa spp.) and represented the initial control hydrology prior to afforestation. Five sites with each vegetation type (15 sites in total), were surveyed (Figure 1). For each plantation plot, a vegetation investigation was conducted within four 10 m × 10 m subplots. The plant height (m), canopy cover, and stand density (plants/ha) within each subplot were quantified, respectively. At the R. pseudoacacia sites, the diameter at breast height (DBH, cm) were also recorded. The vegetation characteristics for each type of plantation are shown in Table 1.
To optimize data representativeness, each paired afforested/control plot had similar topographic characteristics: south-facing, upper slope, and less than 3 km apart. The slope gradients and aspects (clockwise from north) were determined for each plot using a compass, and both were recorded in degrees. At each site, soil samples were collected from depths of 0–0.2 m. The soil texture was determined using a laser diffraction instrument (Mastersizer 2000, Malvern Instruments Ltd., Malvern, UK). Subsequently, three proportions of clay (<0.002 mm), silt (0.002–0.02 mm), and sand (>0.02 mm) contents were calculated. The soil organic matter (SOM) content was analyzed by the dichromate oxidation method. Undisturbed soil cores were collected to measure soil bulk density using a stainless-steel cutting ring (volume 100 mm3). The topographic and soil properties for each type of plantation are shown in Table 2.
The soil moisture content (SMC) at depths of 0–3.0 m was measured by the gravimetric method (unit: g/g). To ensure the comparability in soil moisture content between the different sites, no rainfall events occurred at least a week prior to soil sampling. Soil samples were extracted using a (Ø 5 cm) drill at 0.2 m intervals, making 15 soil samples for each plot, for a total of 450 soil samples. These soil samples were immediately sealed in airtight aluminum cylinders and weighed for the first time, and then transported to the laboratory for 24 h drying at 105 °C using an oven-dry method.

First, paired-sample T-tests were applied to detect the differences in the vertical soil moisture content for each afforested vegetation type, and in the control grassland. Second, redundancy analyses were conducted to isolate the degree of soil moisture changes following afforestation due to the precipitation gradient and afforested vegetation types. The intensity of soil moisture changes following afforestation was calculated using LNRR (Equation (1), and the vegetation types were represented by the absence or presence of dummy variables. The significance of the explanatory variables was tested using Monte Carlo simulations. Third, linear piecewise quantile regression was performed to explore the response of LNRR to the mean annual precipitation (MAP) as the potential constraint [28].

3.1. Comparison of Soil Moisture between each Afforested Vegetation and Control Grassland

3.2. Contribution of Precipitation and Afforested Vegetation Types to Degree of Soil Moisture Change

With the implementation of large-scale restoration projects in the Loess Plateau, some local soil erosion has been successfully controlled. However, high-density afforestation has excessively reduced soil moisture, leading to the formation of dry soil layers across this region [7]. This has further reduced the vegetative carrying capacity of soil water in the Loess Plateau, and also degraded some vegetation communities [8]. The best proof of this is manifested as “the little old man trees” or “dwarfed trees” in the Loess Plateau [53]. In addition, large-scale vegetation restoration projects have reduced river runoff [25]. This has greatly exacerbated water scarcity required by the residential, agricultural, and industrial sectors, potentially affecting more than 100 million people living in the region [24]. Finally, the trade-off of multiple ecosystem functions following afforestation is not necessarily a zero-sum game [54]. For example, soil moisture decline following afforestation might degenerate a forest ecosystem to a grassland, thus accounting for further reductions in the present land carbon sink [9]. Therefore, the priority of ecological restoration is to find a balanced solution of afforestation and water reduction and ultimately ensure that afforestation is ecologically and socially sustainable for this area. Our study demonstrated that afforestation increased the cost of deep soil moisture as the precipitation gradient decreased. Precipitation restrictions began to appear at MAP = 520 mm, and was aggravated at MAP = 380 mm. These precipitation restrictions may be employed to divide the Loess Plateau into distinct ecological regions. From the practical point of view, future restoration measures should be carefully planned, particularly in the regions with MAP < 380 mm.
Restoration projects often encounter conflicts between variable ecological functions (e.g., carbon sequestration and water resources), which require the cautious deployment of restoration strategies to balance multiple objectives. The differentiation of restoration strategies should be assigned to these ecological regions in terms of localized precipitation conditions, taking the Loess Plateau as an example. On the one hand, afforestation may be feasible in areas where the MAP is higher than 520 mm. The reduction of plant density and increasing species diversity based on prudent tree species selection are critical strategies for this region [21]. Furthermore, new research has shown that planted forests have a less positive effect on carbon sequestration; however, they lead to significant water yield reduction in contrast to natural forests [55]. As such, the exotic trees in use should be replaced with less water-demanding native trees to imitate natural forests. On the other hand, afforestation was banned in areas where the MAP was less than 380 mm. Since grassland restoration is considered as an alternative for vegetation restoration in water-limited regions [56], native grassland is strongly advocated to maximize the benefits of ecosystem multifunctionality. For sustainable ecological restoration and construction, further continuous monitoring research on afforestation impacts is urgently required to support more effective restoration strategies, without endangering the availability of soil water in arid and semi-arid areas.

W.W. designed the study; Q.Z. carried out the experiment, analyzed the data, and wrote the first draft of the manuscript; Q.Z., W.W., L.C., and L.Y. contributed with suggestions and corrections, and approved the final manuscript.

The authors thank Zongshan Li and Cong Wang for their generous assistance with the field work. 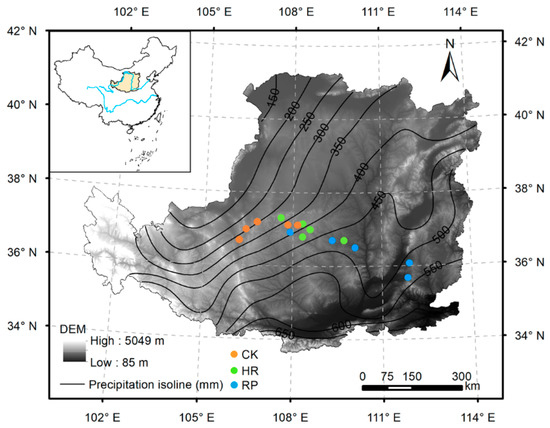 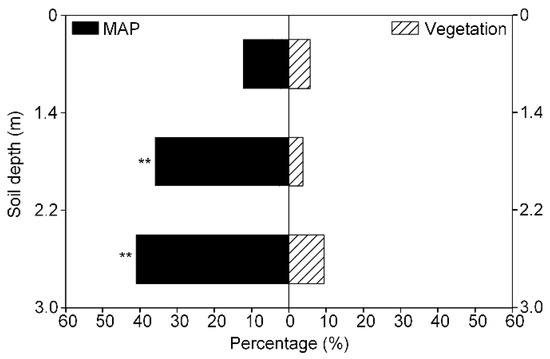 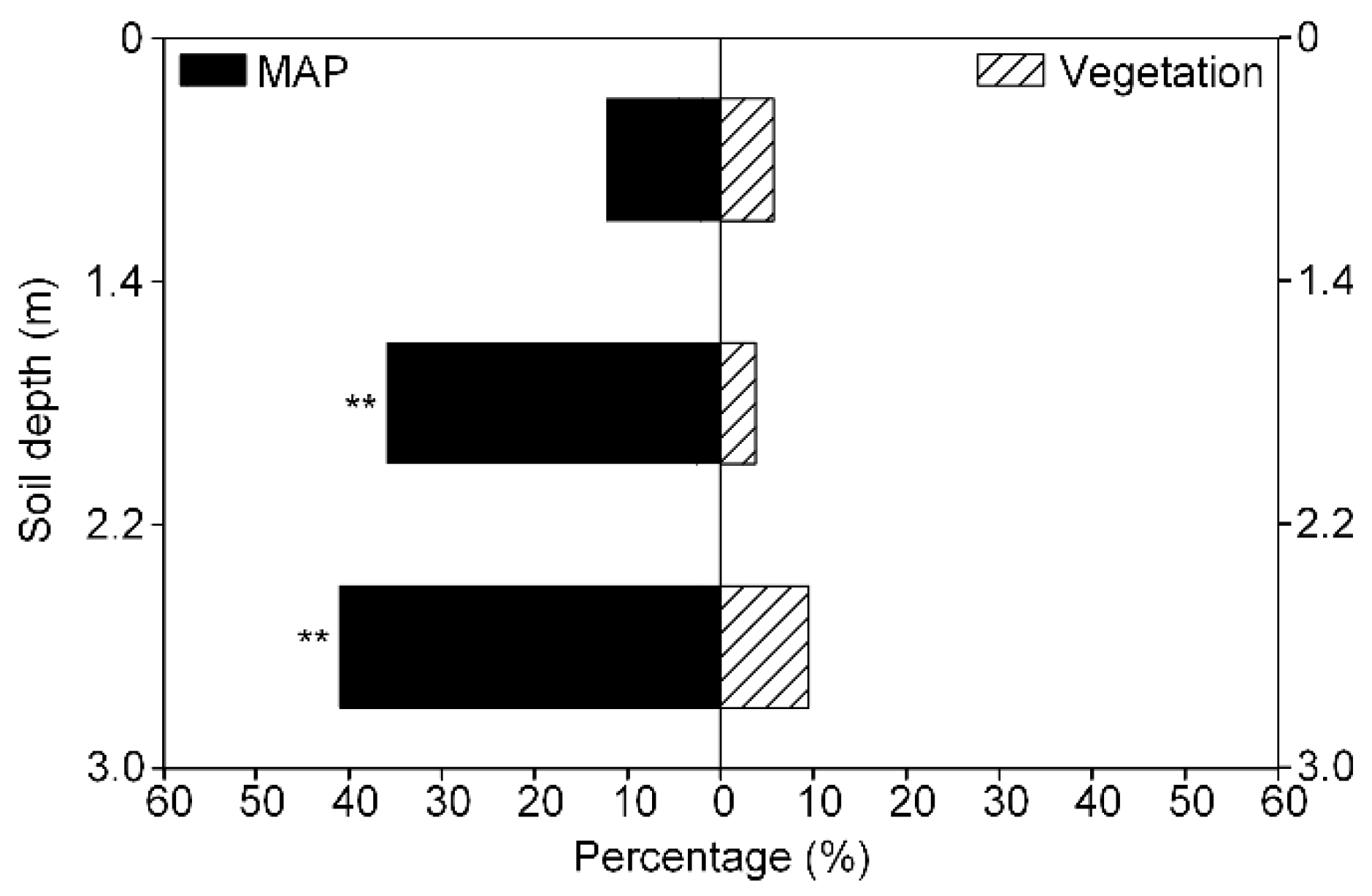