On the Shoulders of Giants: Continuing the Legacy of Large-Scale Ecosystem Manipulation Experiments in Puerto Rico

Relationships between forest cover and streamflow have been studied worldwide, but only a few studies have examined how gradual changes in forest structure and species composition due to logging and climate change affect watershed water yield (Q) and flow regimes. In this study, we analyzed long-term (45 years) hydrologic, climate and forest dynamics data from the subboreal Tahe watershed in northeastern China. Our purpose was to evaluate the effects of forest logging and regeneration on changes in forest biomass and species and to quantify the subsequent impact on mean annual streamflow and flow regime under a changing climate. The study watershed was dominated by old-growth larch (Larix gmelinii Rupr.) during the 1970s, but gradually transformed into young deciduous larch mixed with deciduous broad-leaved birch (Betula platyphylla Sukaczev) during the 2010s. During the same period, the watershed experienced climate change with a significant increase in air temperature of 0.028 ℃/year. We applied eight sensitivity-based techniques to separate the effects of climate change on water yield from those due to forest changes. We used flow duration curves (FDCs) to characterize flow regimes by dividing the study into four key periods based on the proportional change of larch and birch trees. We found that the mean annual streamflow decreased by 10 mm (−16 mm attributed to forest change and +6 mm to climate change) between the 1984–1994 period and the 2006–2016 period when the proportion of birch increased by 20% with a similar total forest volume in the later period. The mean annual streamflow increased from 216 mm to 270 mm (+35.5 mm due to forest change vs +17.7 mm due to climate change) when forest volume decreased by 18.7% (17 m3/ha) between the 1970s and 1984–1994. Water yield changed only slightly (3.5 mm) when forest volume increased by 8.7% (6 m3/ha) from 2000 to 2011. In addition, the magnitude of high flow and low flow increased following deforestation and a shift in species composition from a period (1984–1994) with 70% larch with 30% birch to a later period (2006–2016) with 50% larch with 50% birch. Both high flow and low flow decreased coinciding with a reforestation period (2006–2016). Our results highlight complex interactions among climate, forest structure, total biomass, and plant diversity (trees species composition) in influencing watershed hydrology. Further study is needed to examine the effects of ecohydrological processes such as evapotranspiration in larch and birch forests on hydrologic changes across multiple scales. View Full-Text
Keywords: climate change; forest structure change; species composition shift; forest hydrology; flow regime; water yield climate change; forest structure change; species composition shift; forest hydrology; flow regime; water yield
►▼ Show Figures 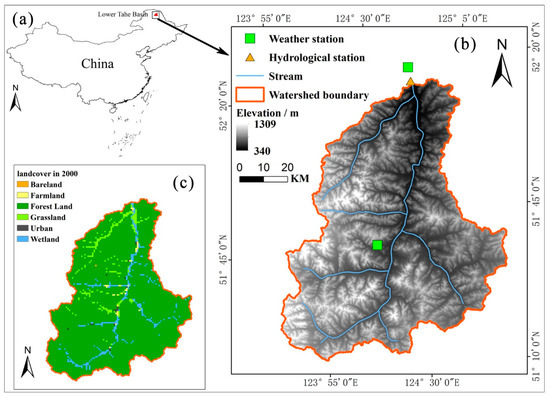