Long-term ecological research (LTER) and monitoring programs accrue invaluable ecological data that inform policy and improve decisions that enable adaptation to and mitigation of environmental changes. There is great interest in identifying ecological indicators that can be monitored easily and effectively to yield reliable data about environmental changes in forested ecosystems. However, the selection, use, and validity of ecological indicators to monitor in LTER programs remain challenging tasks for ecologists and conservation biologists. Across the eastern United States of America, the foundation tree species eastern hemlock (Tsuga canadensis (L.) Carrière) is declining and dying from irruptions of a non-native insect, the hemlock woolly adelgid (Adelges tsugae Annand). We use data from the Harvard Forest LTER site’s Hemlock Removal Experiment together with information from other eastern US LTER sites to show that plethodontid salamanders can be reliable indicators of ongoing ecological changes in forested ecosystems in the eastern USA. These salamanders are abundant, they have a history of demographic stability, are both predators and prey, and can be sampled and monitored simply and cost-effectively. At the Harvard Forest LTER, red-backed salamanders (Plethodon cinereus Green) were strong indicators of intact forests dominated by eastern hemlock (Tsuga canadensis); their high site fidelity and habitat specificity yielded an indicator value (robust Dufrêne and Legendre’s “IndVal”) for this species of 0.99. Eastern red-spotted newts (Notopthalmus viridescens viridescens Rafinesque) were better indicators of nearby stands made up of young, mixed hardwood species, such as those which replace hemlock stands following adelgid infestation. At the Hubbard Brook and Coweeta LTER sites, plethodontid salamanders were associated with intact riparian habitats, which may also be dominated by eastern hemlock. We conclude that plethodontid salamanders satisfy most criteria for reliable ecological indicators of environmental changes in eastern US forests. View Full-Text
Keywords: ecological monitoring; foundation species; Harvard Forest; indicator species; long-term ecological research; Plethodontidae; Tsuga canadensis ecological monitoring; foundation species; Harvard Forest; indicator species; long-term ecological research; Plethodontidae; Tsuga canadensis
►▼ Show Figures 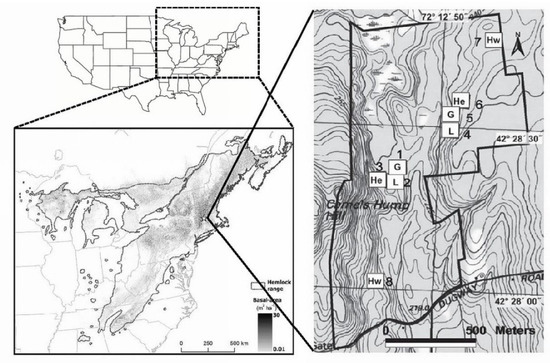