Campbell Island, which is 600 km south of New Zealand, has the southernmost tree line in this ocean sector. Directly under the maximum of the westerlies, the island is sensitive to changes in wind strength and direction. Pollen records from three peat cores spanning the tree line ecotone provide a 17,000-year history of vegetation change, temperature, and site moisture. With postglacial warming, tundra was replaced by tussock grassland 12,500 years ago. A subsequent increase of shrubland was reversed at 10,500 years ago and wetland-grassland communities became dominant. Around 9000 years ago, trees spread, with maximum tree line elevation reached around 6500 to 3000 years ago. This sequence is out of step with Southern Ocean sea surface temperatures, which were warmer than 12,500 to 9000 years ago, and, subsequently, cooled. Campbell Island tree lines were decoupled from temperature trends in the adjacent ocean by weaker westerlies from 12,500 to 9000 years ago, which leads to the intrusion of warmer, cloudier northern airmasses. This reduced solar radiation and evapotranspiration while increasing atmospheric humidity and substrate wetness, which suppressed tree growth. Cooler, stronger westerlies in the Holocene brought clearer skies, drier air, increased evapotranspiration, and rising tree lines. Future global warming will not necessarily lead to rising tree lines in oceanic regions. View Full-Text
Keywords: tree line; sub-Antarctic; westerly winds; postglacial; Holocene; Southern Ocean; climate change; palynology; cloud; peat tree line; sub-Antarctic; westerly winds; postglacial; Holocene; Southern Ocean; climate change; palynology; cloud; peat
►▼ Show Figures 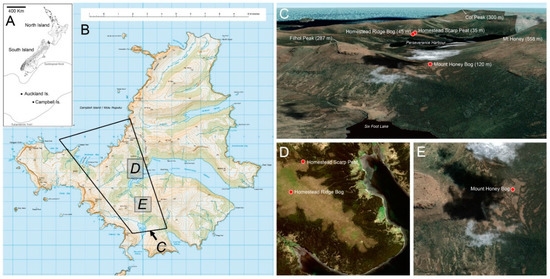