A Deep Learning Model for Data-Driven Discovery of Functional Connectivity

The sources of data for this study were the Astra-Zeneca Early Prostate Cancer clinical program. This program consisted of three Phase III clinical trials on bicalutamide or placebo in subjects with prostate cancer. These three studies had slightly different procedures but were designed to yield data that could be pooled. The data and study protocols were obtained through Project Data Sphere (PDS UID: Prostat_AstraZe_1995_102, Prostat_AstraZe_1995_105, Prostat_AstraZe_1995_106). The datasets publicly released contain data for the drug arm but not the placebo arm. Basic information about these studies is given in Table 1.

2.2. Objectives of the Original Studies

The stated objectives of these studies varied slightly, but were similar and can be summarized as:

2.3. Design of the Original Studies

The three studies all had a randomized, double-blind, parallel-group design, comparing bicalutamide with placebo. Subjects were randomized 1:1 to bicalutamide or placebo. The study design is illustrated in Appendix A.

Inclusion and exclusion criteria were similar for the three studies, however, there were some differences (see Appendix B). Demographic and clinical features of subjects are shown in Table 2.
The studies assessed a wide range of information, including demographics, clinical information (such as clinical stage, and the presence of metastatic disease), physical characteristics (such as weight), and concomitant medications.

2.5. Comparability of the Studies

2.6. Derivation of the Target Variable

The classification problem dealt with two classes. A patient could either be ‘good responder’ or a ‘bad responder’. This target variable was defined such that it reflected both efficacy and safety/drug toleration. For all the datasets, there were insufficient cases of death and clinical progression for these to form the basis of the target variable. Therefore, efficacy was defined in terms of PSA levels, a recognized biomarker for prostate cancer disease progression.
A subject was a ‘good responder’ if he met the following conditions:
If a patient did not meet all four of these conditions, he was considered to be a “bad responder”.
Subjects were excluded from the analyses if there were insufficient data to evaluate all of these conditions.

‘Feature reduction’ (i.e., selection of predictor variables) can improve the accuracy of ML models by removing noise from the training data. In the datasets used in this study, a particular issue was that binary coding of concomitant medications yielded over 5000 features. Therefore, feature reduction was applied. For all datasets, binary variables with less than 10 positive cases (i.e., very low variance) were excluded.
For models using datasets merged from more than one study, only features in common for all three studies were included. Further feature reduction was applied according to the following steps:

Other main preprocessing steps were:
Normalization is a standard requirement for machine learning algorithms. Normalization of predictor data was conducted using a scaler robust to outliers. This scaler is known as ‘RobustScaler’ as implemented in the Python library Scikit-learn. The procedure, for each feature, centers data on the median and scales the data by dividing them by the interquartile range. The resulting features have a mean and median of zero and a standard deviation of 1.

Preprocessing resulted in the creation of five datasets. The features and descriptive statistics of the datasets merged from the three studies are given in Appendix C.
A reasonable level of balance between the frequency of the classes in the target variable is important to optimize the accuracy of ML predictions. The individual study datasets were highly imbalanced in terms of the frequencies of the target variable classes, but the datasets merging studies were well balanced in this respect: the dataset merging data from studies 1, 2, and 3 had 46% good responders; the dataset merging data from studies 1 and 3 had 56% good responders (Table 3). Both of these proportions are close to the ideal 50% split between the target variable classes.
The separate study datasets included additional features, which were not in common for all three studies. Study 1 also included the indications for which concomitant medications had been prescribed. Studies 2 and 3 also included medical history and physical abnormalities based on a physical examination. Study 3 also included the Golombok Rust Inventory of Sexual Satisfaction questionnaire [26], a 28-item questionnaire for the assessment of sexual dysfunction in heterosexual couples. The full datasets are available on request.

All models involved the prediction of ‘good responders,’ based only on data available at baseline. We developed three types of models:
These models used a dataset that merged data from all three studies. The expectation was that the larger sample size would yield greater accuracy than the other models. These models are applicable to the development of systems for precision medicine. However, they may be less relevant to predictive clinical trial enrichment since the acquisition of datasets of this size will often be unfeasible in the real world.

For these models, datasets for Studies 1 and 3 were merged for model training, with the dataset for Study 2 used for model testing. These models provide a test of external generalizability. Studies 1 and 3 were chosen for model training because this merged dataset was well balanced in terms of target variable classes, with 56% good responders. However, the dataset for Study 2 was less well balanced, with 30% good responders.

These models used datasets from studies 1, 2, and 3, used independently. This allowed the development of models which could be used to informally explore relationships between model performance, sample size, and class distribution (i.e., the proportions of good and bad responders).
These model types are illustrated in Figure 1.

Five ML algorithms were used, based on their wide recognition in the ML literature, their appropriateness for tabular data and their successful application in previous biomedical studies. For example, XGBoost has been used to predict biomarker outcomes for glioblastomas [27] and K-Nearest Neighbors has been used to predict cognitive decline in Alzheimer’s patients [28].

The K-nearest neighbors (KNN) algorithm predicts the class of a new case by assuming it will be the same class as the nearest cases, based on feature distances. The number of cases used in this computation (k) is specified by the user. Like logistic regression, KNN is a simple algorithm, which we included as a second benchmark.

The CatBoost (‘category boosting’) algorithm uses gradient boosting, which makes predictions based on an ensemble of decision trees. While CatBoost tends to perform better with categorical data, it can also handle continuous variables. CatBoost introduced a new system of model regularization called minimal variance sampling, which uses the distribution of loss derivatives and assigns probabilities for sampling of boosting trees, maximizing accuracy.

Voting classifiers are an example of ensemble learning in which the predictions from multiple ML algorithms are combined. Final predictions are based on either a majority vote (‘hard voting’) or the average probability for each prediction (‘soft voting’). We developed a voting classifier, based on catboost, light gradient boosting machine (lightGBM), and XGBoost as component classifiers.

Key results for the Three-Study Merged Dataset Models are given in Table 4.
Differences in accuracy between models were explored. For this, the three-study merged dataset was split into training and test sets using an 80:20 ratio. The models were trained on the training dataset and accuracy on the test set (n = 731) was compared for the five classifiers. Exact McNemar tests (two-tailed) were then used to make all ten possible pairwise comparisons. To adjust for the number of comparisons, a p threshold of 0.01 was used. Using this methodology, there were no significant differences in accuracy between the three most accurate models (voting classifier, XGB and CatBoost). Likewise, there were no significant differences in accuracy between the two least accurate models (KNN and logistic regression). However, the three most accurate models (XGB, voting classifier and CatBoost) were all significantly more accurate than the two least accurate models (KNN and logistic regression).
Hyperparameter tuning for the XGBoost resulted in the use of the following settings: number of estimators was 300, maximum depth = 5, learning rate was 0.01, base score was 0.5, the booster was the gradient boosting tree, minimum child weight was 5, regularization lambda was 0.8, regularization alpha was 0.3, column sample by tree was 0.5, and subsample was 0.8.
Gini importance was computed for each feature, on the basis of the XGBoost model. Table 5 gives these importances, and also class distributions for each feature, which can aid the interpretation of these feature importances. The feature with the highest Gini importance was prostatectomy prior to baseline, which was much more common in good responders (70%) than bad responders (37%).
A receiver operating characteristic (ROC) curve plots the tradeoff between the true positives rate and the false positives rate. The true positive rate is the proportion of positive cases correctly classified (also called ‘sensitivity’ or ‘recall’). The false positive rate is the proportion of negative cases incorrectly classified as positive. The ROC curve for the Three-Study Merged Dataset Models is shown in Figure 2.

Key results for the three Individual Study Models are given in Table 7.
For Study 1, the most accurate model used CatBoost, which was associated with a mean accuracy of 77%. This is a modest improvement on the chance level of accuracy which was 71%, based on the degree of class imbalance (i.e., 71% good responders). For Studies 2 and 3, the models did not provide an improvement on chance level.

The authors thank D.R. Beacher and Giles Catcheside for their valuable comments on a draft of the manuscript.

Appendix A. Outline of Study Design for the Three Studies Included in the Analyses Presented in This Paper

Appendix B. Inclusion and Exclusion Criteria for the Three Astra-Zeneca EPC Studies 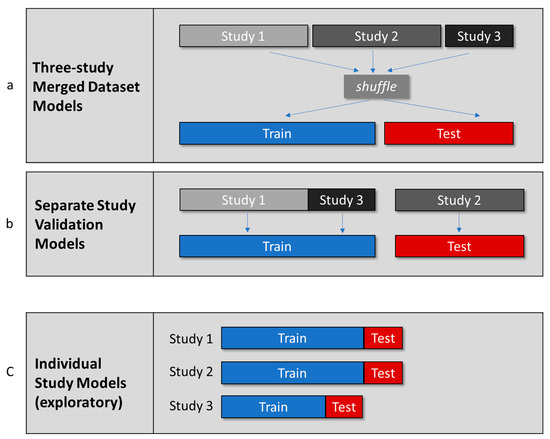 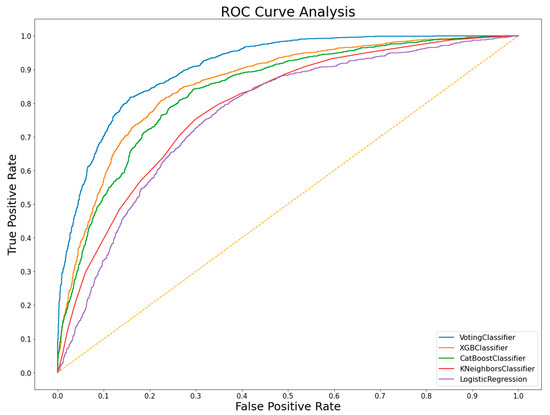 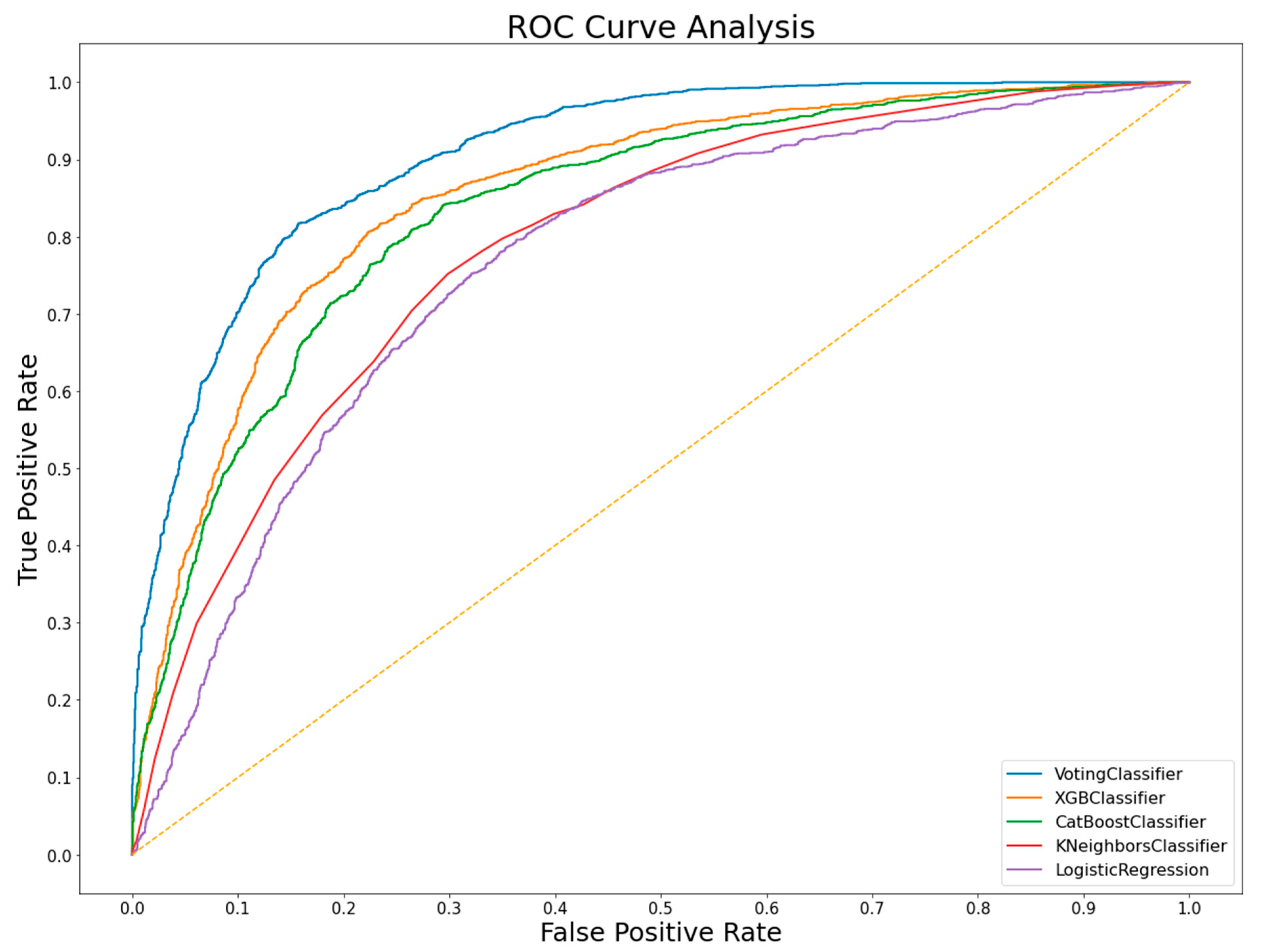