In this paper, we explore the effect of using different convolutional layers, batch normalization and the global average pooling layer upon a convolutional neural network (CNN) based gaze tracking system. A novel method is proposed to label the participant’s face images as gaze points retrieved from eye tracker while watching videos for building a training dataset that is closer to human visual behavior. The participants can swing their head freely; therefore, the most real and natural images can be obtained without too many restrictions. The labeled data are classified according to the coordinate of gaze and area of interest on the screen. Therefore, varied network architectures are applied to estimate and compare the effects including the number of convolutional layers, batch normalization (BN) and the global average pooling (GAP) layer instead of the fully connected layer. Three schemes, including the single eye image, double eyes image and facial image, with data augmentation are used to feed into neural network to train and evaluate the efficiency. The input image of the eye or face for an eye tracking system is mostly a small-sized image with relatively few features. The results show that BN and GAP are helpful in overcoming the problem to train models and in reducing the amount of network parameters. It is shown that the accuracy is significantly improved when using GAP and BN at the mean time. Overall, the face scheme has a highest accuracy of 0.883 when BN and GAP are used at the mean time. Additionally, comparing to the fully connected layer set to 512 cases, the number of parameters is reduced by less than 50% and the accuracy is improved by about 2%. A detection accuracy comparison of our model with the existing George and Routray methods shows that our proposed method achieves better prediction accuracy of more than 6%.
Keywords: gaze tracking; convolution neural network; batch normalization; global average pooling layer gaze tracking; convolution neural network; batch normalization; global average pooling layer

In order to build a complete gaze tracking system, the proposed method comprises of four steps, collecting data, preprocessing data, training model and evaluating and testing, as shown in Figure 1. The first step is collecting data. The system detects the participant’s facial image while watching the videos and an eye tracker are adopted to label the gaze point. The second step is preprocessing data. The collected images are firstly checked and cropped, and data augmentation is performed to increase the amount of training samples. The third step is the training model. The system uses the fed images, the single eye, the double eyes and the face, into proposed network for training. Finally, through evaluating and testing by adjusting network parameters and architecture, the optimized model can be acquired.

The 22 inch with 16:9 screen is used as the video playback device, Logitech C920r HD Pro Webcam and Tobii Eye Tracking 4C as the experimental tools for collecting data. The accuracy of the eye tracker for gaze tracking provides good evidence for experimentally collected data. Under normal circumstances, the distance between the screen and the participant is about 70 cm. The webcam is placed above the screen and the eye tracker is placed under the screen, as shown in Figure 2. The participant can swing his head freely within the range detectable by the webcam. In this way, the most real and natural viewing information can be collected without too many restrictions. Each participant watches two videos selected randomly from six animated videos with length between 245–333 s, as shown in Table 1.
The flowchart of collecting data is shown in Figure 3. The eye tracker executes a calibration procedure prior to collecting data. The OpenCV [24] and eye tracker are used to detect the participant’s face and gaze, respectively. Finally, facial images are labeled as gaze.
To reduce the complexity of predicting the gaze as a classification method, and to achieve a balance in the size of the block area, this paper refers to the design composition method and the range of the focus area [11] to divide the screen into blocks, as shown in Figure 4. The screen contains 37 blocks in total. The block numbers 0 to 24 are located in the central area of the screen, and each block size is of 4.8 cm × 2.7 cm. The block numbers 25 to 36 are located in the peripheral area of the screen, and each block size is 12 cm × 6.75 cm. Therefore, the labeled gazes in related to the facial image are categorized into 37 blocks to train the model.

The collected images are checked firstly to eliminate unsuitable images. Then, the cropping procedure is performed to crop out the required image size used as a training sample, 32 × 32 pixels for single eye scheme, 96 × 32 pixels for double eyes scheme and 200 × 200 pixels for face scheme.
Collecting a lot of data to acquire a good training model is a difficult task; therefore, data augmentation is applied. The data augmentation has the benefit for reducing the probability of overfitting. Two methods of data augmentation are used in this paper to evaluate the efficiency, namely brightness and noise.

The experimental results will explain the data augmentation and evaluating model. Data are collected from 22 participants resulted in a total of 83,366 facial images with labeled gazes. The data distribution of each block is shown in Figure 7. We use 3.0 GHz CPU (Intel Xeon E5-2620V4) and 1 GPU (Nvidia GTX 1080 Ti) to speed up training.

Part of the experiments will be implemented for different schemes to explore the effect by adjusting network parameters and architecture including NoCL, Lr, FC, BN and GAP referring to Table 2.

The evaluations for diversity parameters are performed by adjusting the numbers of NoCL and settings of BN as well as the GAP instead of the fully connected layer. A novel method is proposed to build a training dataset as the participant watches videos, because this is closer to the viewer’s visual behavior. The most real and natural data of users can be obtained; the participants can swing their head freely without too many restrictions in the data collecting procedure. We propose three schemes, namely, the single eye image, double eyes image and facial image to evaluate the efficiency and computing complexity under different network architectures. Generally, the input image of an eye tracking system mostly is the eye or face of the small size image with relatively few features. Regarding the efficiency of BN and GAP, this paper completed the evaluation of the 3 schemes. Based on Table 4, the results show that BN and GAP are helpful in overcoming the problem to train models and in reducing the network complexity; however, the accuracy does not necessarily show a significant improvement. It is shown that the accuracy is significantly improved when using GAP and BN at the mean time. Overall, the face scheme has the highest accuracy of 0.883 when BN and GAP are used at the mean time. Additionally, comparing to the FC512 case, the number of parameters is reduced less than 50% and the accuracy is improved by about 2%.
Since the numbers of input features are different and the corresponding NoCL at the best performance is different for the 3 proposed schemes, the number of parameters will be different. Based on Table 5, presenting the numbers of the parameters of the 3 proposed schemes, the face scheme obtains the maximum number of parameters and the single eye scheme obtains the minimum number of parameters. Meanwhile, using GAP, the parameters were significantly reduced. Therefore, the execution time for applying GAP can be reduced; in our case, there are 4.466 ms, 5.071 ms and 10.776 ms respectively for the single eye scheme, double eyes scheme and face scheme.
According to Figure 28, we observed and found that the incorrect estimated class is usually near the correct class. When the gaze estimation is applied to discover the object of interest, based on our previous work [18], the influence caused by incorrect prediction will be reduced by using the classification method. In the future, we plan to work on adaptively adjusting the block size based on the content and gaze distribution to reduce incorrect prediction. 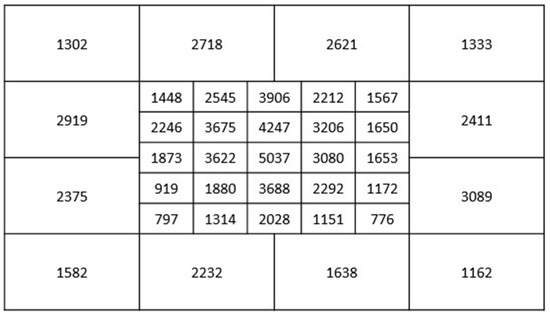 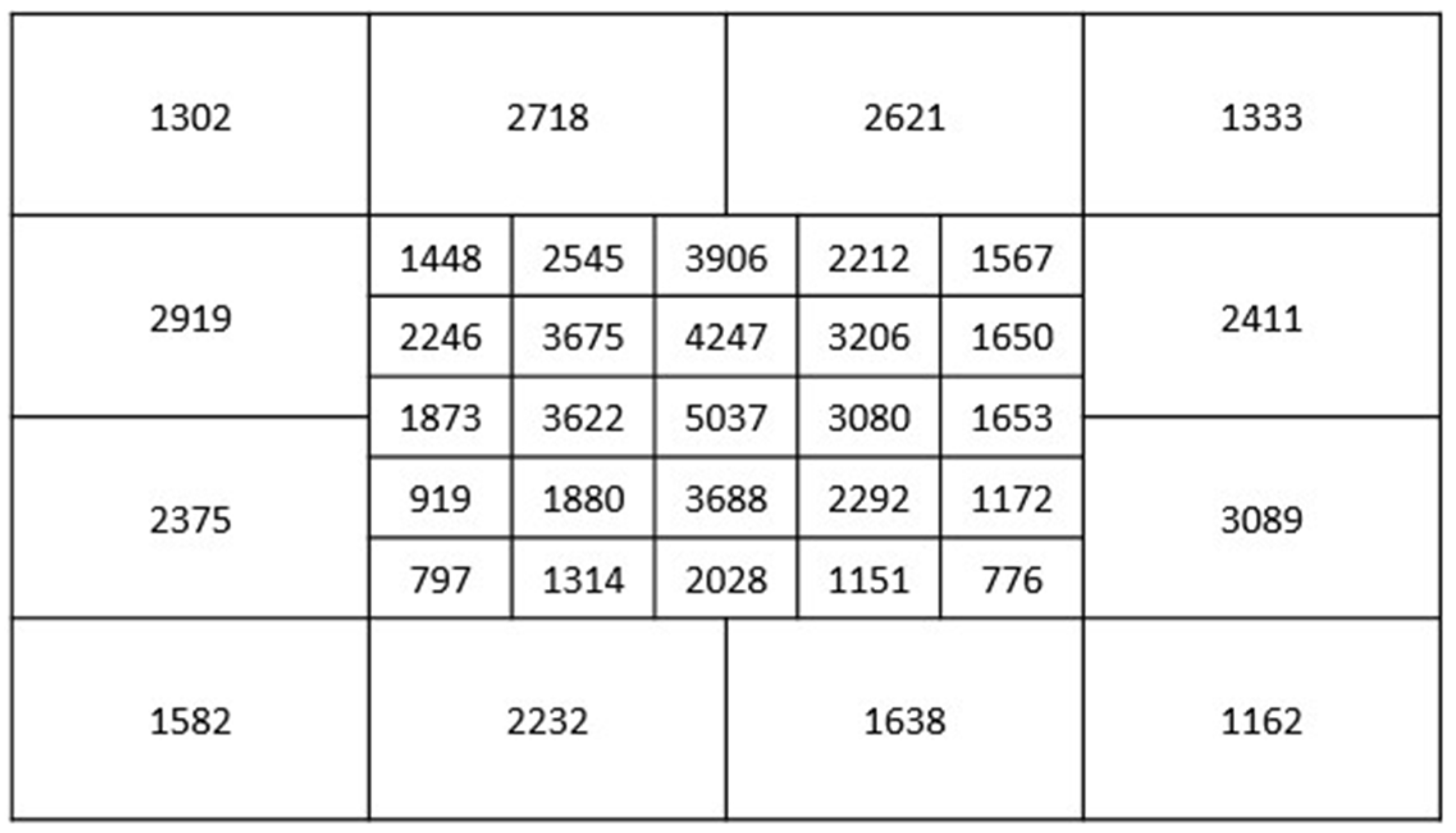 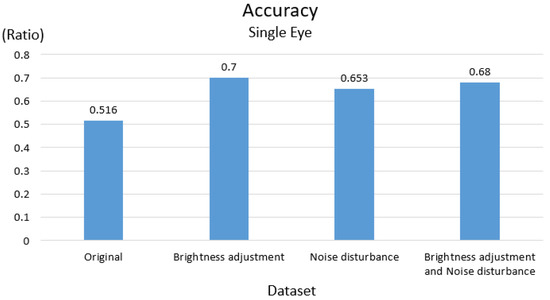 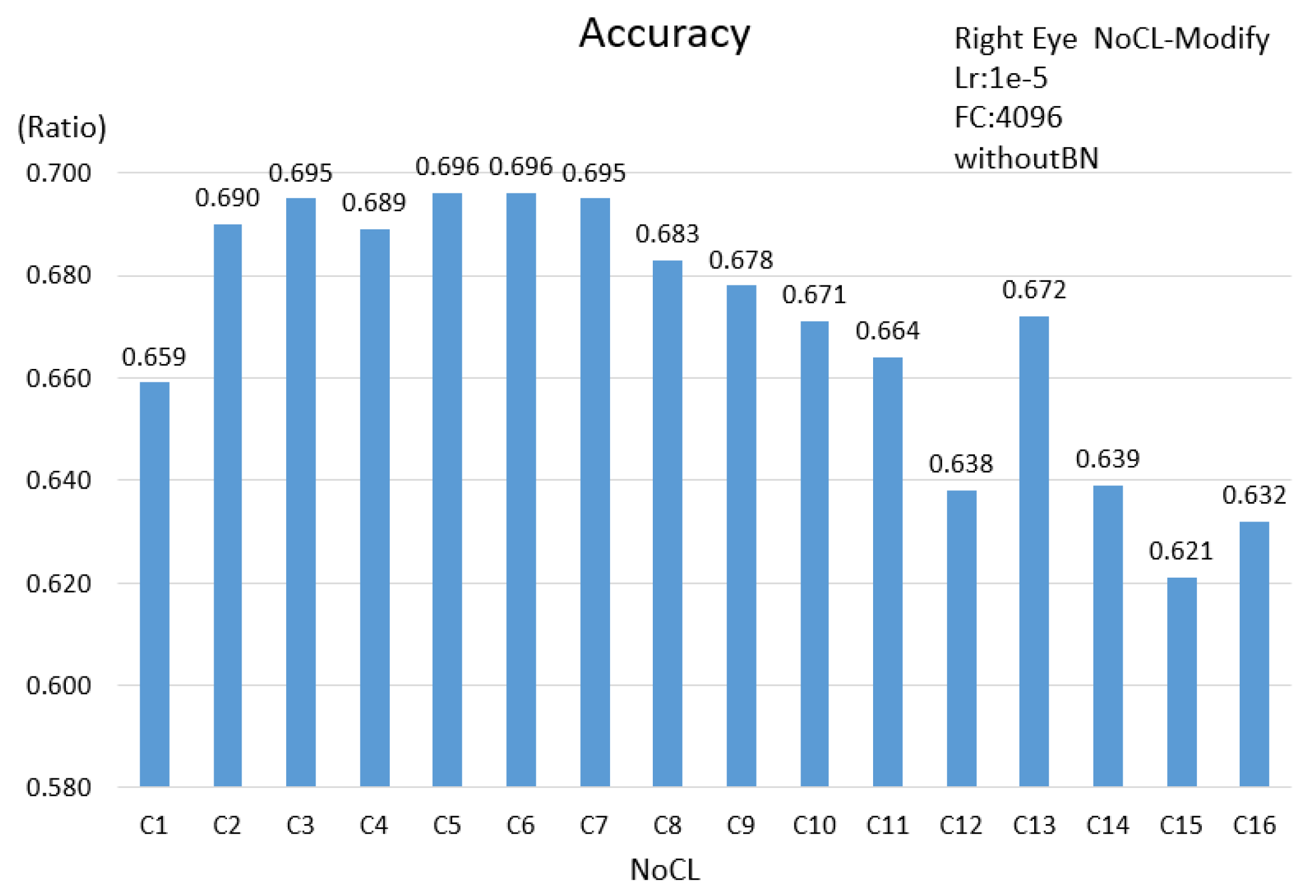 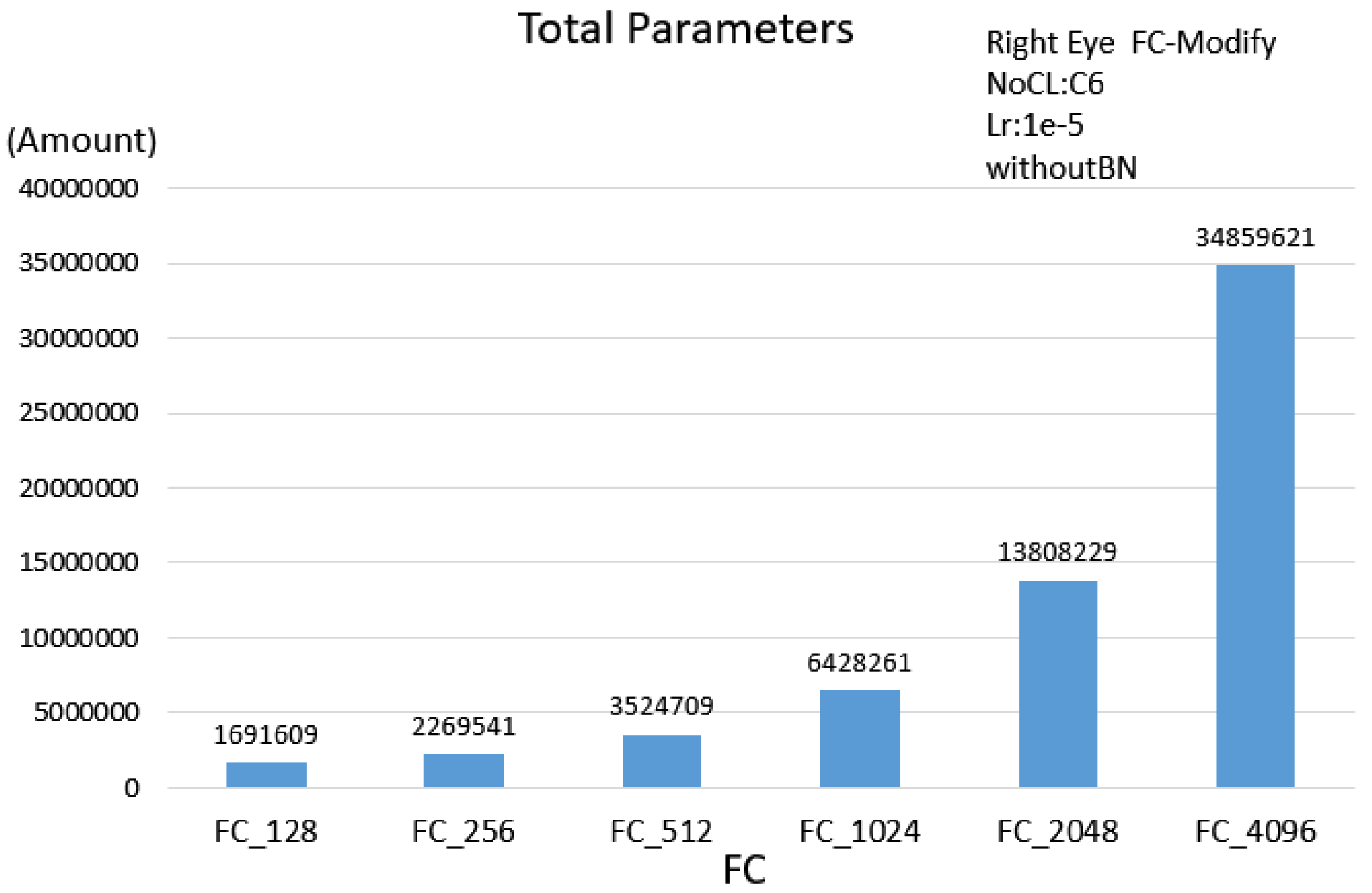 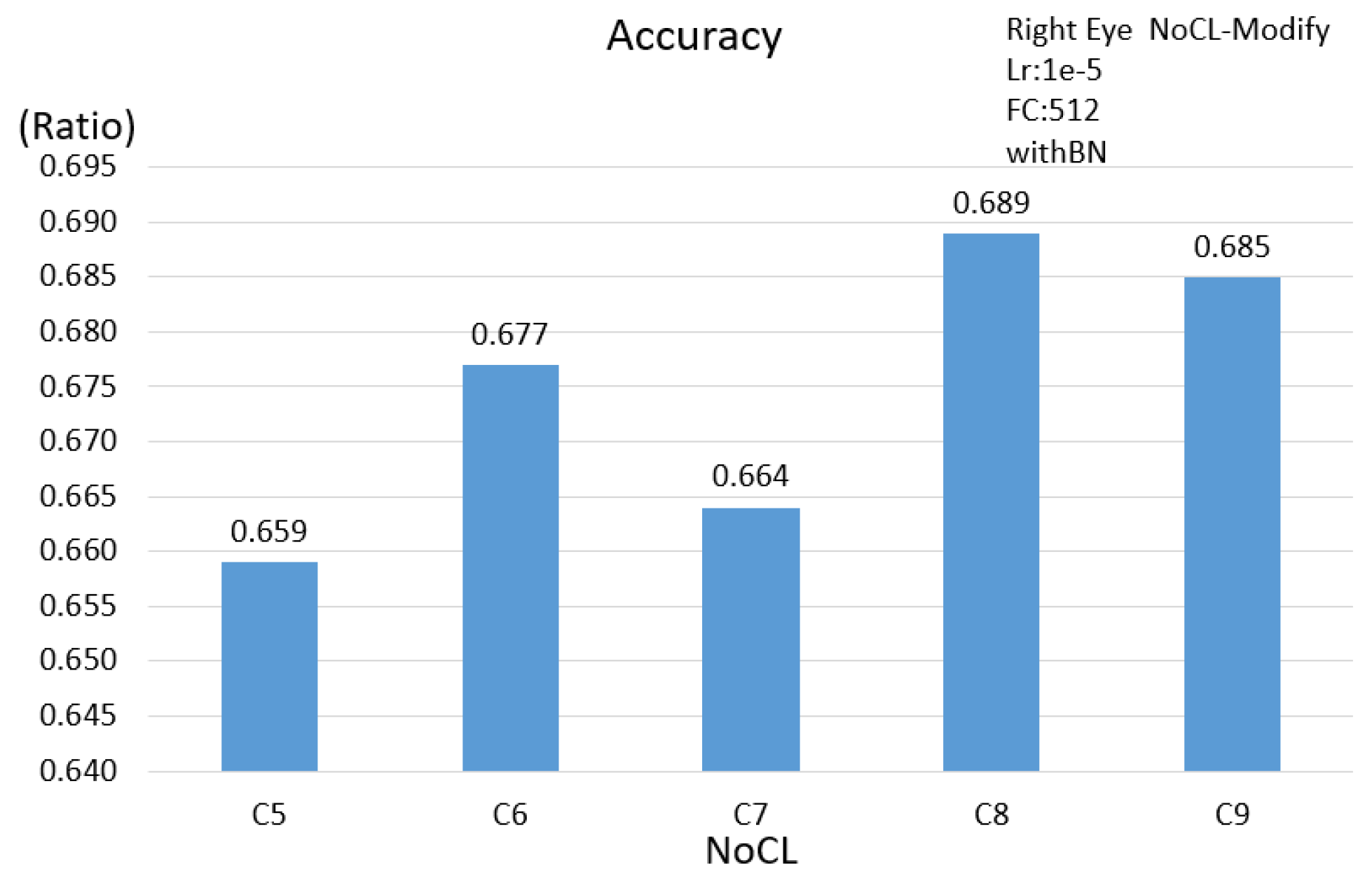 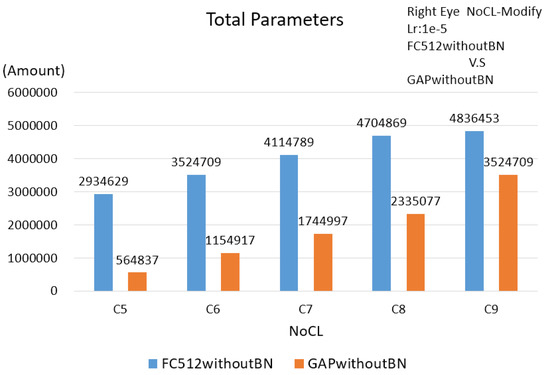 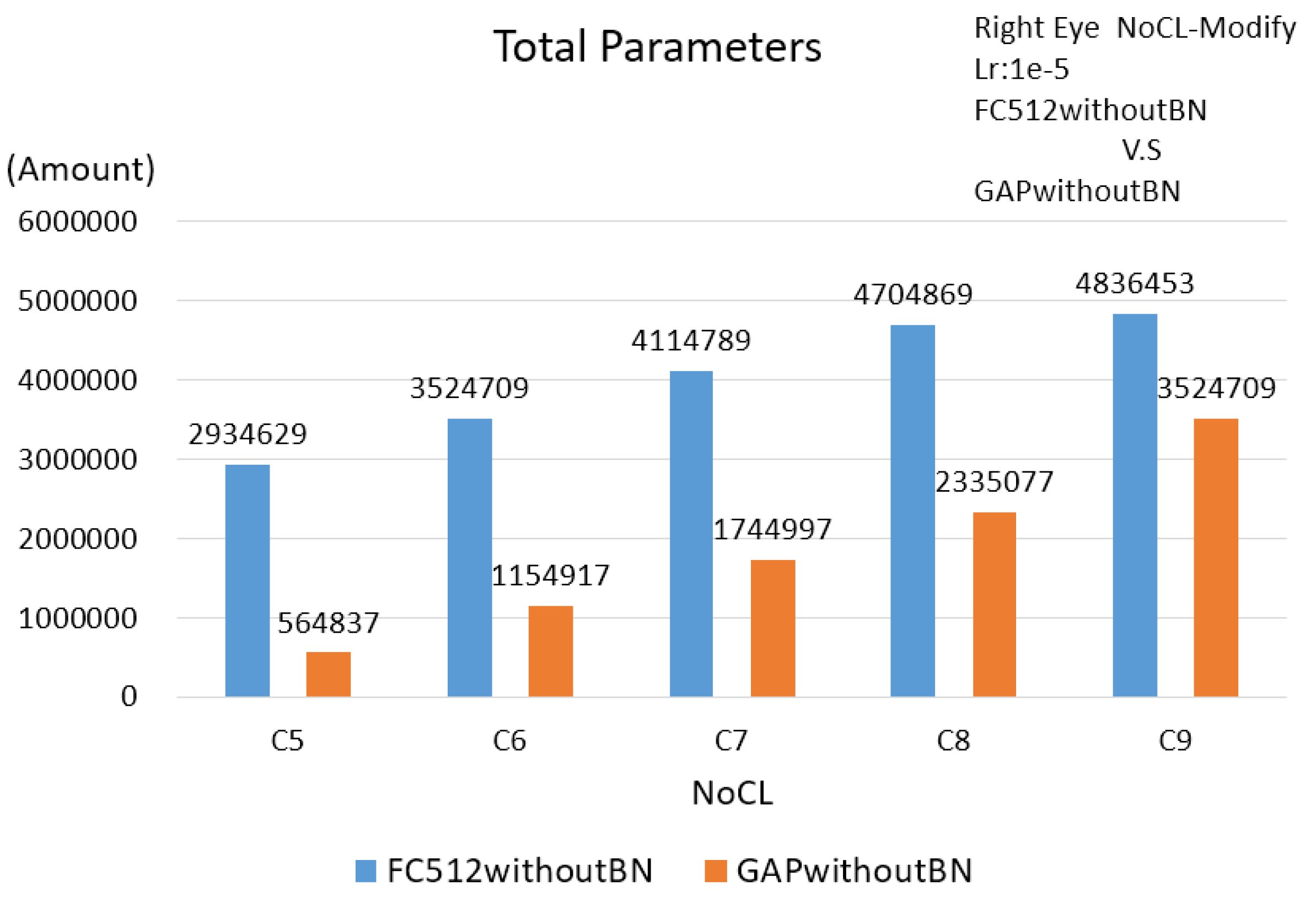 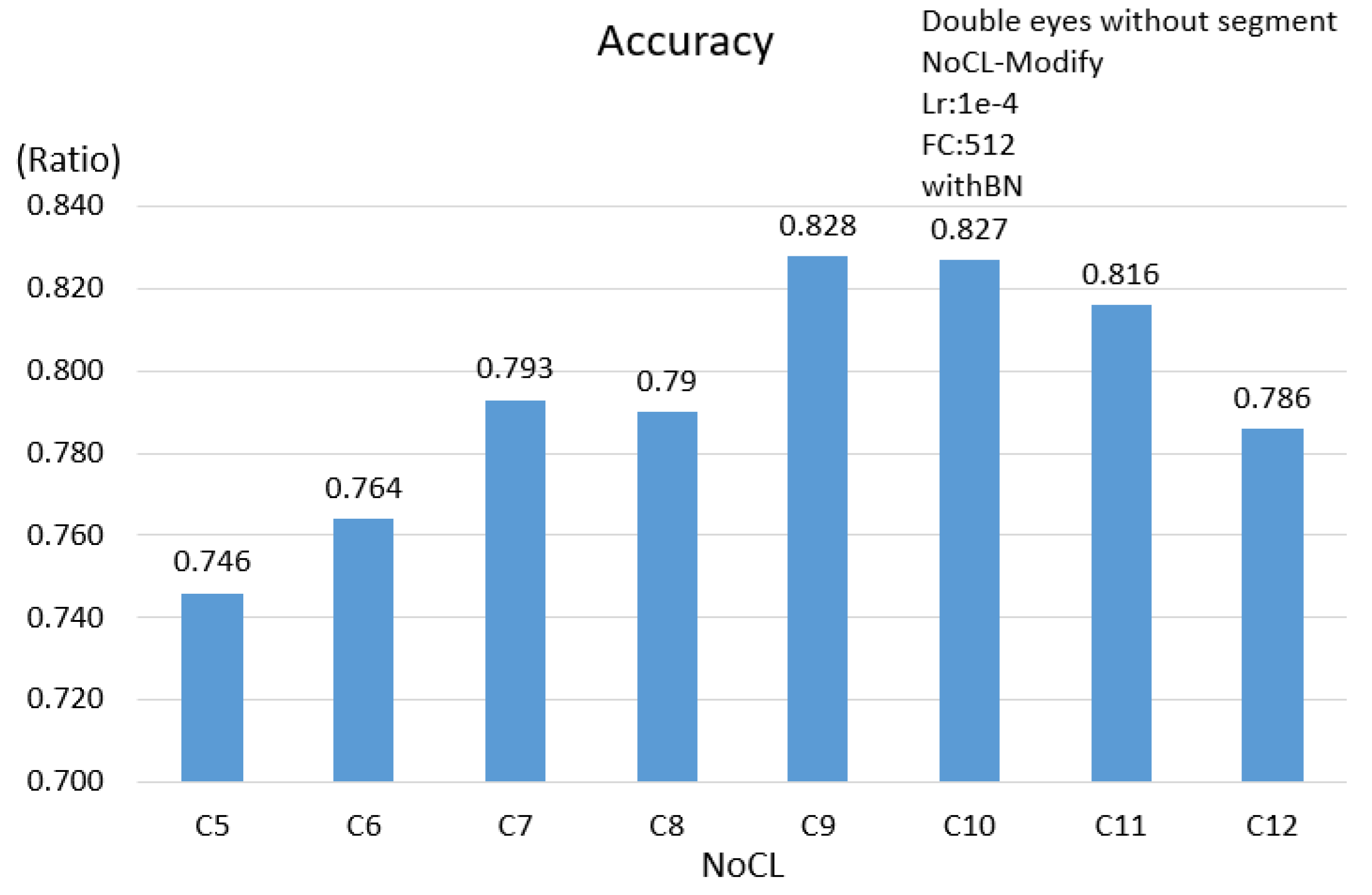 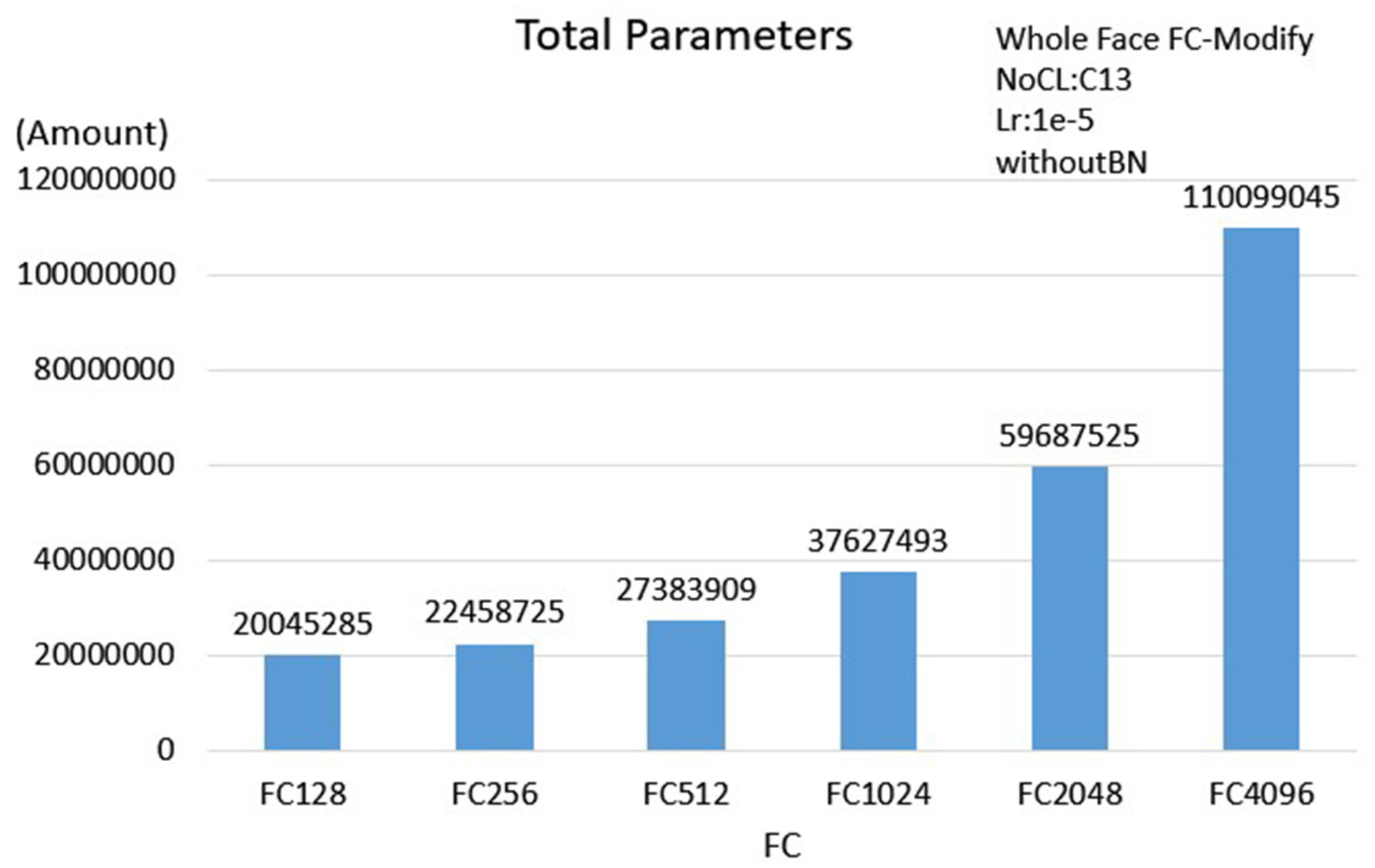 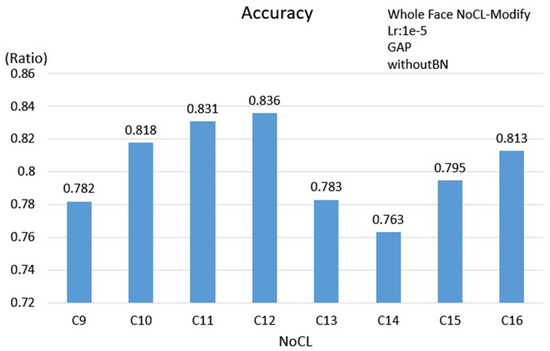 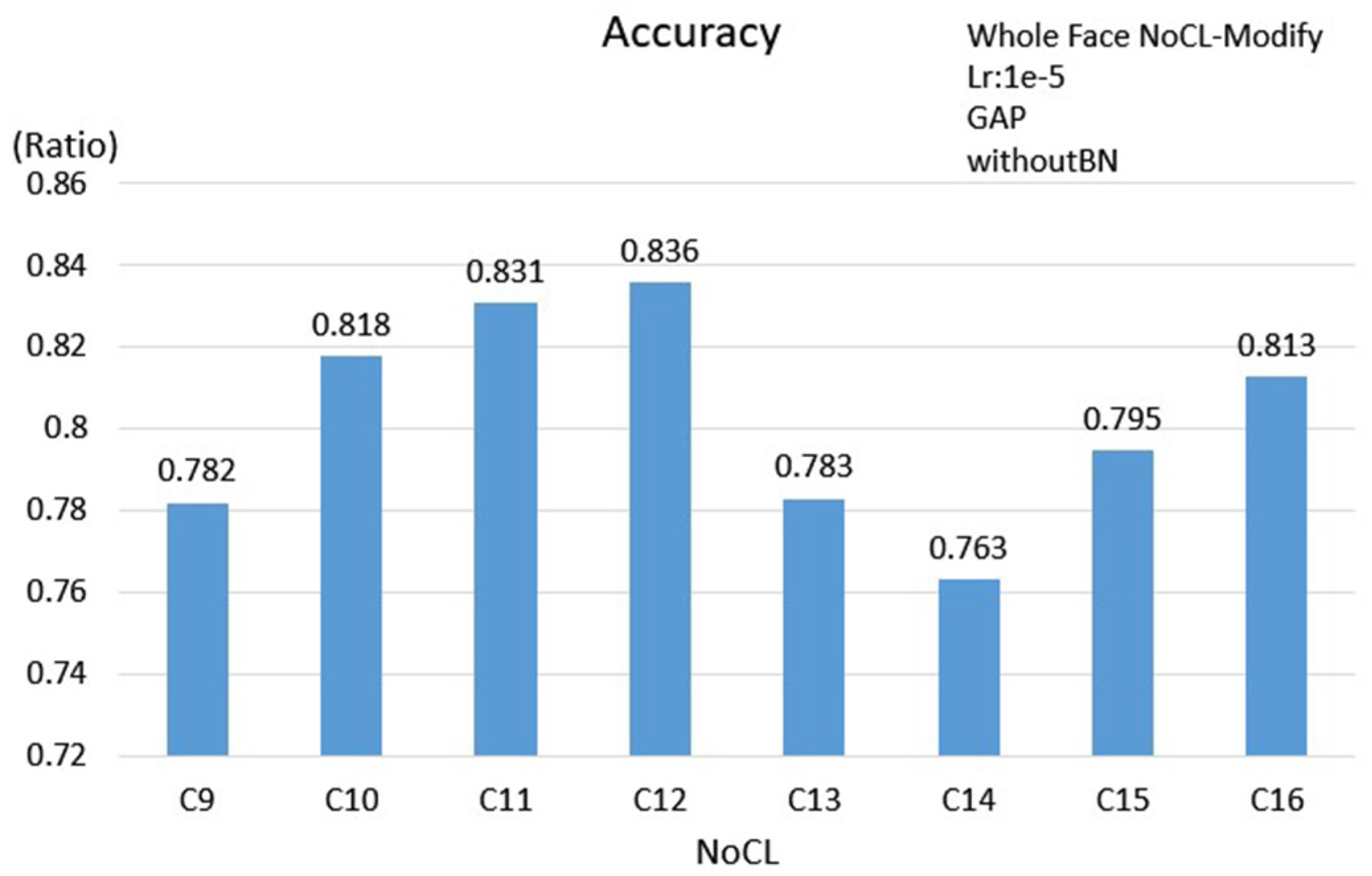 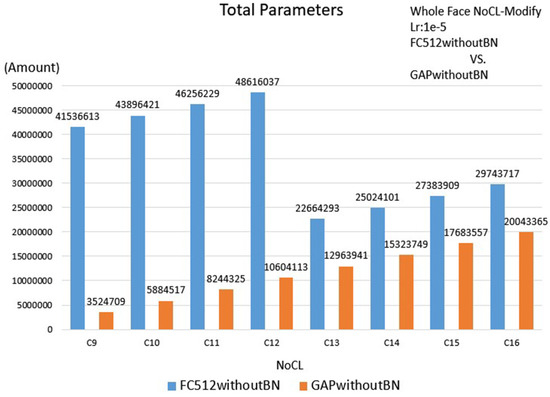 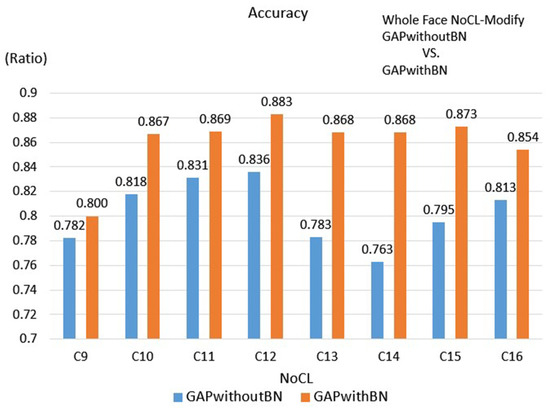 Table 6. Comparison of prediction accuracy of various methods.
Table 6. Comparison of prediction accuracy of various methods.
© 2020 by the authors. Licensee MDPI, Basel, Switzerland. This article is an open access article distributed under the terms and conditions of the Creative Commons Attribution (CC BY) license (http://creativecommons.org/licenses/by/4.0/).
We use cookies on our website to ensure you get the best experience. Read more about our cookies here.
Accept
We have just recently launched a new version of our website. Help us to further improve by taking part in this short 5 minute survey here. here.
Never show this again