The next few years will be exciting as prototype universal quantum processors emerge, enabling the implementation of a wider variety of algorithms. Of particular interest are quantum heuristics, which require experimentation on quantum hardware for their evaluation and which have the potential to significantly expand the breadth of applications for which quantum computers have an established advantage. A leading candidate is Farhi et al.’s quantum approximate optimization algorithm, which alternates between applying a cost function based Hamiltonian and a mixing Hamiltonian. Here, we extend this framework to allow alternation between more general families of operators. The essence of this extension, the quantum alternating operator ansatz, is the consideration of general parameterized families of unitaries rather than only those corresponding to the time evolution under a fixed local Hamiltonian for a time specified by the parameter. This ansatz supports the representation of a larger, and potentially more useful, set of states than the original formulation, with potential long-term impact on a broad array of application areas. For cases that call for mixing only within a desired subspace, refocusing on unitaries rather than Hamiltonians enables more efficiently implementable mixers than was possible in the original framework. Such mixers are particularly useful for optimization problems with hard constraints that must always be satisfied, defining a feasible subspace, and soft constraints whose violation we wish to minimize. More efficient implementation enables earlier experimental exploration of an alternating operator approach, in the spirit of the quantum approximate optimization algorithm, to a wide variety of approximate optimization, exact optimization, and sampling problems. In addition to introducing the quantum alternating operator ansatz, we lay out design criteria for mixing operators, detail mappings for eight problems, and provide a compendium with brief descriptions of mappings for a diverse array of problems. View Full-Text
Keywords: quantum computing; quantum gate model; quantum algorithms; quantum circuit ansatz; optimization; approximate optimization; constrained optimization; constraint satisfaction problems quantum computing; quantum gate model; quantum algorithms; quantum circuit ansatz; optimization; approximate optimization; constrained optimization; constraint satisfaction problems
►▼ Show Figures 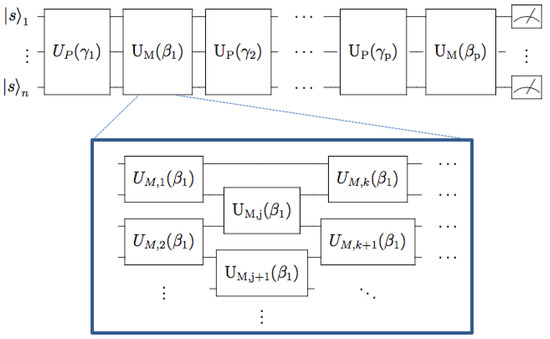