In this section, some basic definitions and properties (for more details, see [25]) are first introduced, which will be used in the following sections.
Definition 1
([25]). The definition of the Liouville fractional integral is described by:where is the well-known Gamma function, which is defined by .
Definition 2
([25]). The Caputo derivative is defined by:where n is the first integer, which is not less than α, i.e.,
In the following, for simplicity, we denote the fractional integral by and the Caputo derivative by , respectively.
Definition 3
([25]). The two-parameter Mittag–Leffler function is defined by:For Especially,
To proceed with the discussion of the main results, the following lemmas are given.
Lemma 1
([25]). From the definition of the Caputo derivative, when , we have:
Lemma 2
([35]). Let be a vector of a differentiable function. Then, for any time instant , the following relationship holds:where is a constant, square, symmetric and positive definite matrix.
Lemma 3
([25]). The fractional order differentiation or integral of the Mittag–Leffler function is:where .
Lemma 4
(Generalized Gronwall inequality [36]). Suppose , a(t) is a nonnegative, nondecreasing function locally integrable on (some ) and g(t) is a nonnegative, nondecreasing continuous function defined on , (constant), and suppose is nonnegative and locally integrable on with:on the interval. Then:
In this paper, we consider a class of fractional order linear distributed parameter systems with repetitive operation characteristics as follows: where subscript k denotes the iterative number of the process; x and t respectively denote space and time variables, ; is a bounded open subset with smooth boundary ; , are the state vector, input vector and output vector of the system, respectively. The time-varying matrices with appropriate dimensions are assumed to be bounded and square integrable on D is a bounded positive constant diagonal matrix, i.e., . and are known, and is a Laplace operator on .
Remark 1.
When the fractional order the fractional order distributed parameter System (1) is reduced to an integral order one, which has been widely investigated in [11,16,17,18,19].
The corresponding initial and boundary conditions of System (1) are: where is the unit outward normal derivative on and and are known constant diagonal matrices, satisfying:
The design objective in this paper is to find an iterative learning control law to generate the control input such that the system output tracks the desired output trajectory as accurately as possible when k goes to infinity for all .
To this end, the updating law considered in this manuscript is a second order P-type ILC updating law given by: where denotes the tracking error, are two initial inputs, is a constant and , and L are unknown parameters to be determined.
Remark 2.
The identical initial condition is commonly used in ILC. As pointed out in [37], it will limit the application of ILC. Many modified strategies have been used to avoid this restriction. Borrowed from [37,38], we designed a P-type ILC updating law (7) with initial state learning where the strict identical initial condition is not required.
Throughout, this paper, denotes an n-dimensional Euclidean space, and I means an identity matrix of appropriate order. For the n-dimensional vector , its two-norm for the n-dimensional vector is defined as , and the spectrum norm of the order square matrix A is where represents the maximum eigenvalue. denotes the spectral radius of matrix A. Let be the Hilbert space. If we define then
For the function we define the norm of as:
For the function sequence , the norm of is defined as:

In this section, two numerical examples are presented to demonstrate the validity of the design method.
Consider a tubular flow reactor with a cooling jacket where an irreversible exothermic zeroth order reaction takes place. The reaction rate is considered to be temperature dependent, then it varies with time and the location of the reactor. The cooling jacket and feed temperatures are chosen as the manipulated variables. The thermal spatiotemporal dynamics can be derived from the energy balance inside the reactor and can be presented as the following distributed parameter systems [40]: where T is the stream temperature inside the reactor, t is time and denotes the spatial coordinate, L is the reactor length. The terms and h are used for thermal conductivity, density, heat capacity, axial velocity, heat of reaction, pre-exponential reaction constant, activation energy and the heat transfer coefficient between the reactor and cooling jacket, respectively. presents the cooling jacket temperature.
In the vicinity of the steady-state working point, nonlinear Model (65) can be linearized as [41]: where and vary nonlinearly with temperature during the entire heating process. Define the measured value of the thermocouple as:
In order to simplify the example, set the above distributed parameter system with fractional order and: where .
Let the reference be , . For the above system, we apply the following P-type ILC updating law: where The initial state value is , while the control input value at the beginning of learning is set to zero.
By some straightforward calculations, we can find:
That is, the convergence Condition (64) is not satisfied (Theorem 1 in [19] is invalid). However,
From Corollary 3, it can be concluded that the tracking error is convergent.
To simulate the fractional order operator, we use the following expression: [42] where h represents the sampling interval and the number of samples is denoted as k. is the notation of the binomial coefficients. To conserve computing resources, the length of the memory L is set as a finite recording number [42], usually . To obtain the numerical solution, we use the two order explicit center difference scheme, in which the sampling periods are taken as .
From the viewpoint of viscoelastic theory, the initial history (terminal) should be the state over a time-interval, not a state at a given time [43,44]. To consider the physically consistent initial conditions, a simple solution could be obtained by the procedure proposed in [43,45]. To simplify this discussion, the initial time of setting the integral is zero.
Figure 1 and Figure 2 are the desired curved surfaces. Figure 3 and Figure 4 show the system output of the ninth iterations. It can be seen that the system output is capable of approaching the desired trajectory accurately within a few iterations. Figure 5 and Figure 6 are the error surface when iteration number When the number of iterations is nine, the absolute values of the maximum tracking error are , respectively. Figure 7 shows the -norm of the tracking errors in each iteration. Thus, Figure 1 to Figure 7 show that the designed ILC is effective.
Let the reference be and the fractional order . The two-norm of the tracking errors in each iterations is shown in Figure 8. It can be seen that the fastest tracking speed happens as .

In this paper, a second order P-type ILC scheme was applied to fractional order distributed parameter systems. The convergent condition was derived using the Gronwall inequality, which has a broader range of applications and is less conservative than some existing ones. The validity of the proposed design method was demonstrated by a numerical example. Our future work includes ILC with initial state learning and D-type ILC. Moreover, the high order ILC law will also be included.

Y.-H.L. carried out theoretical analysis and wrote the paper. Z.-M.C. performed the experiment and analyzed the data.

This research was funded by the National Natural Science Foundation of P.R. China grant number 61573298, the Scientific Research Fund of the Hunan Provincial Education Department grant number 15B238 and the Key Laboratory of Intelligent Computing and Information Processing of Ministry of Education.

The authors declare that there is no conflict of interest regarding the publication of this paper. There have no financial and personal relationships with other people or organizations that would influence our work. There is no professional or other personal interest of any nature or kind in any product, service and/or company that could be construed as influencing the position presented in, or the review of the manuscript. 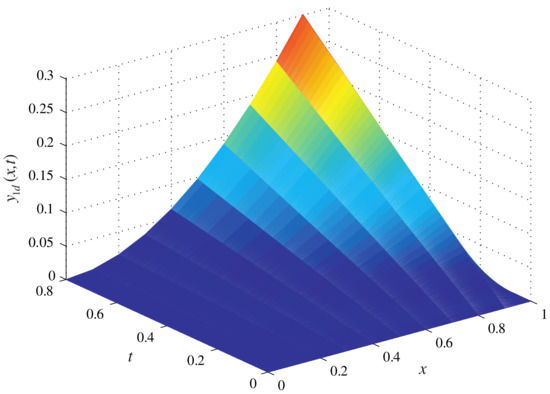 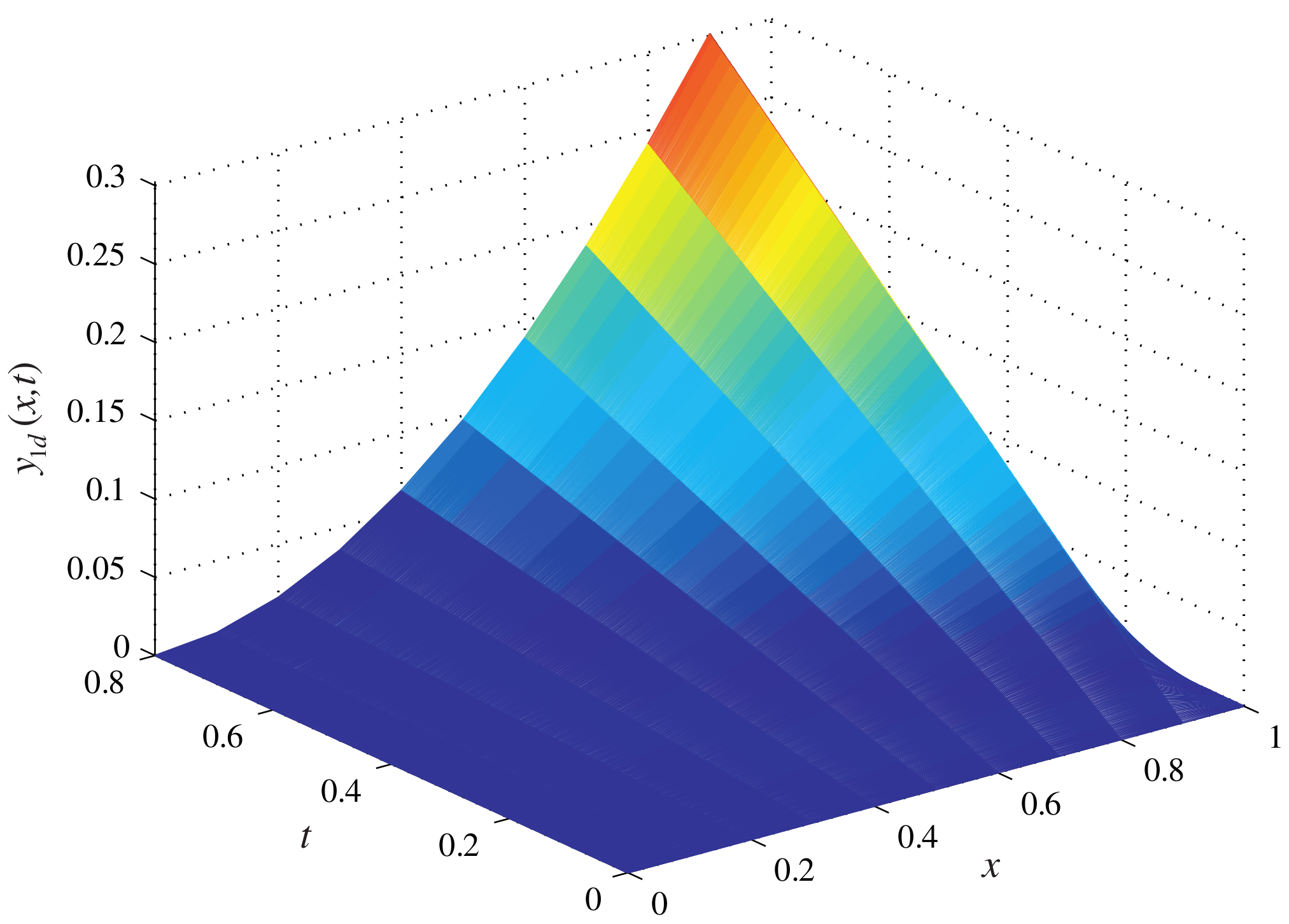 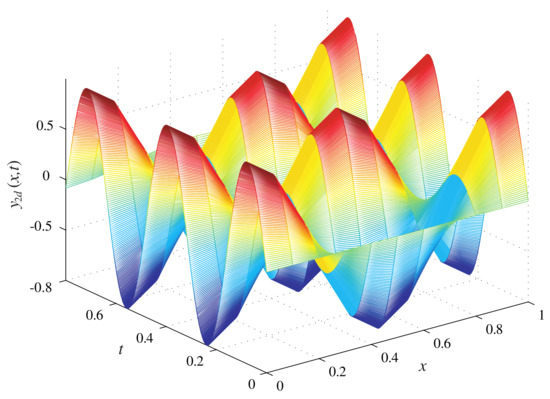 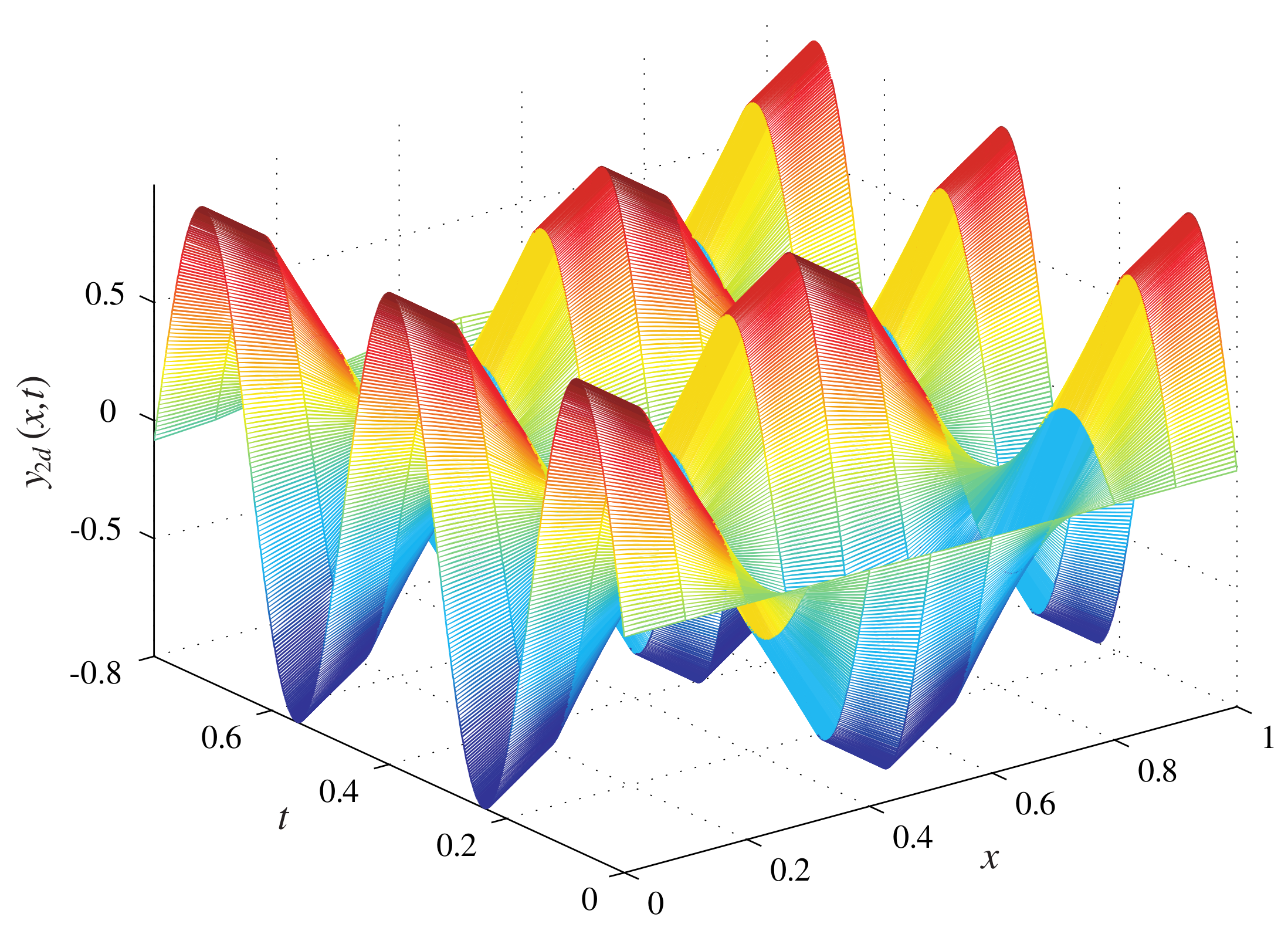 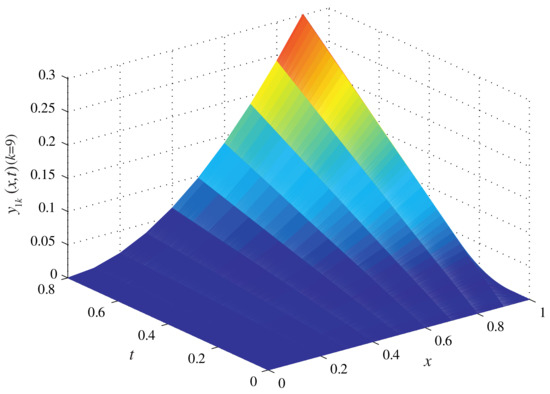 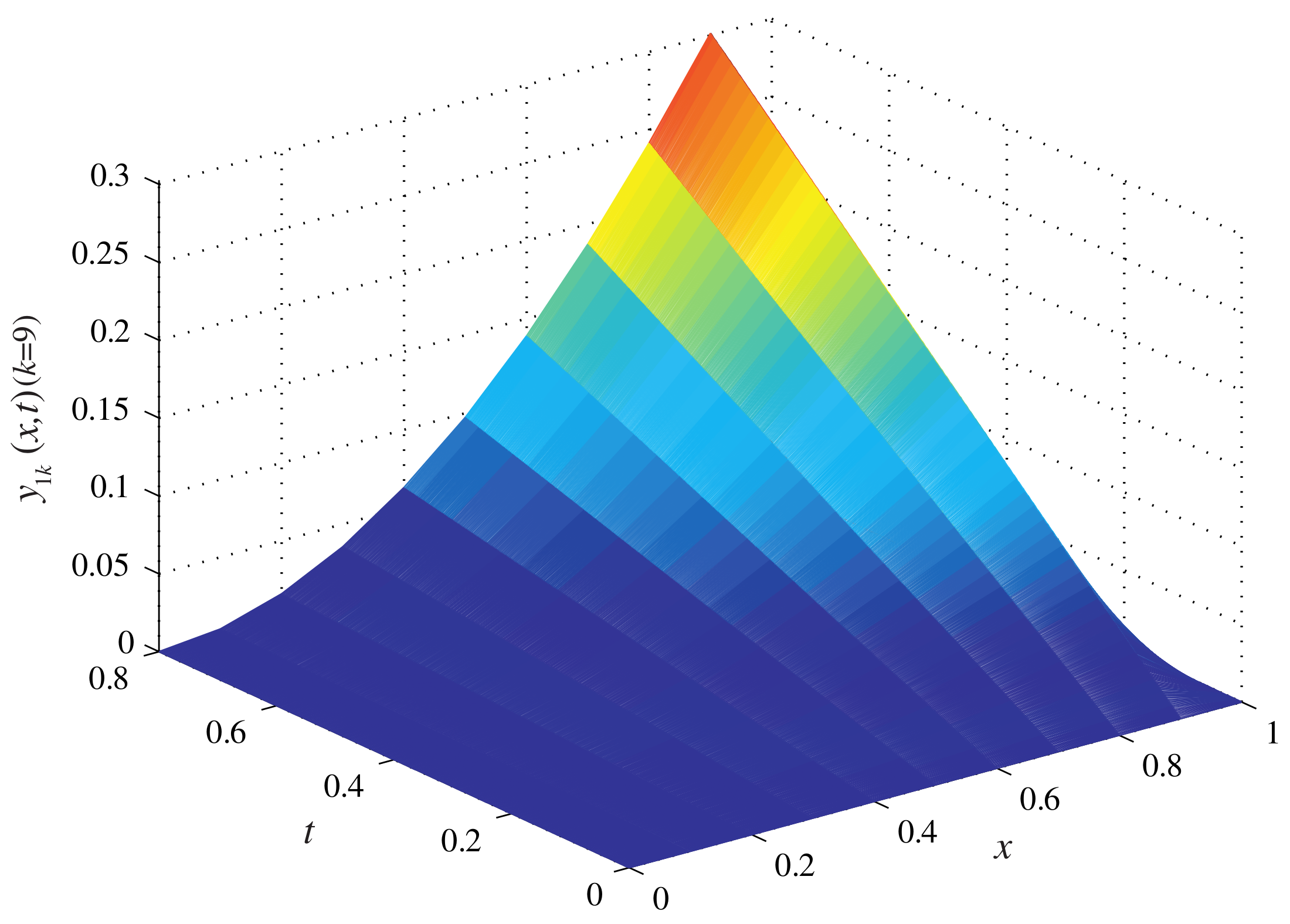 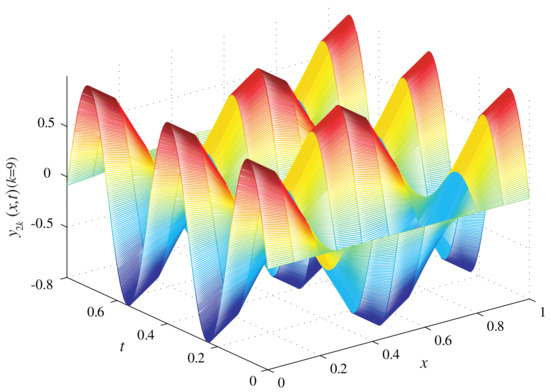 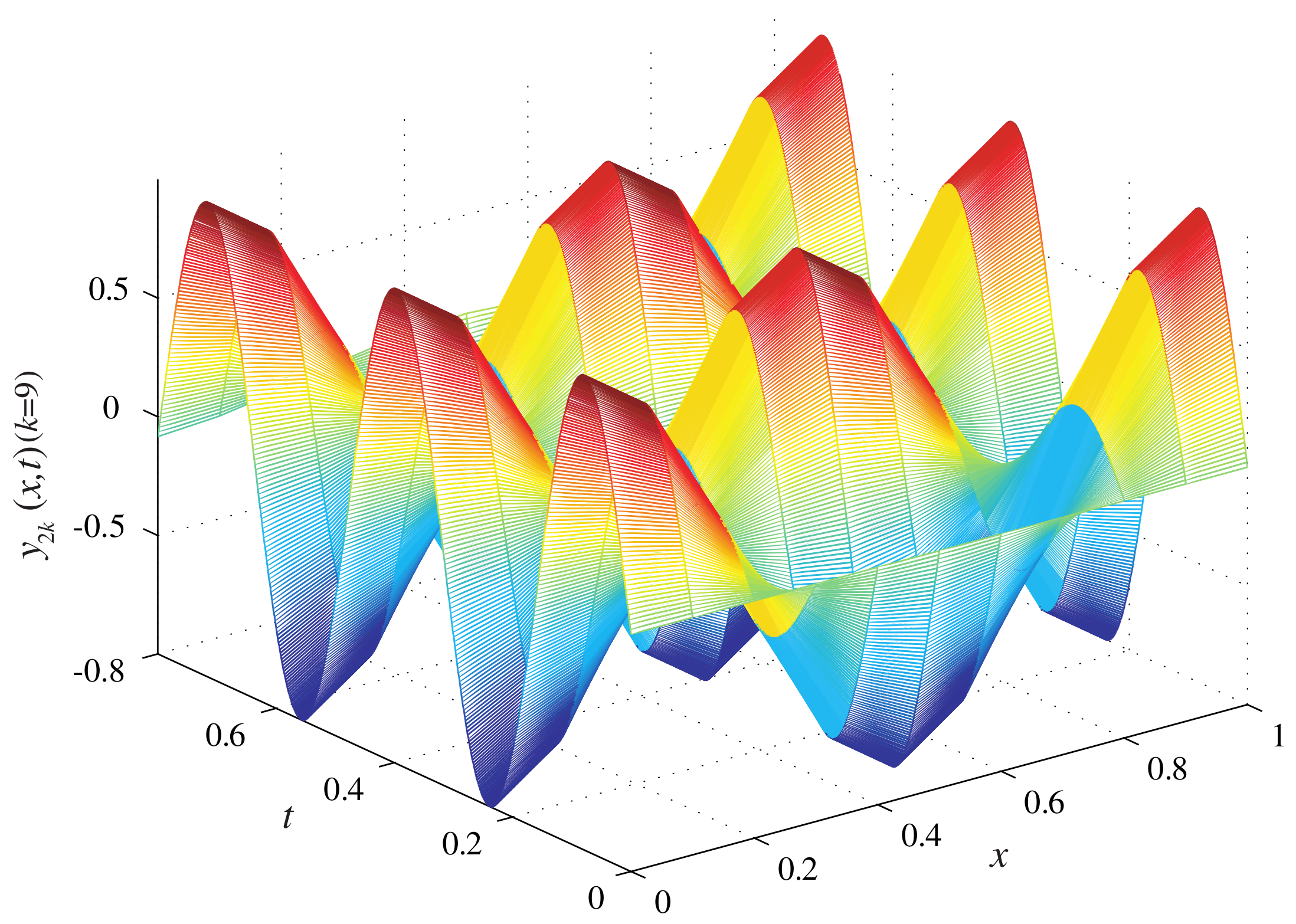 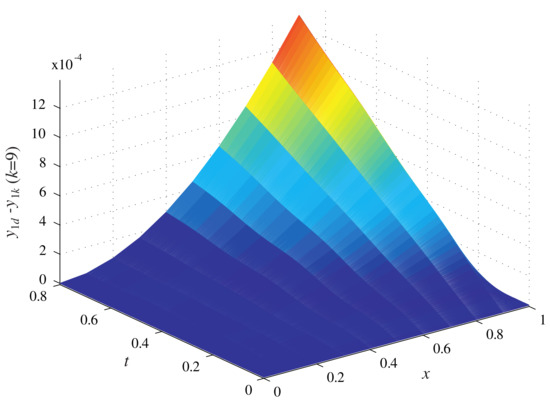 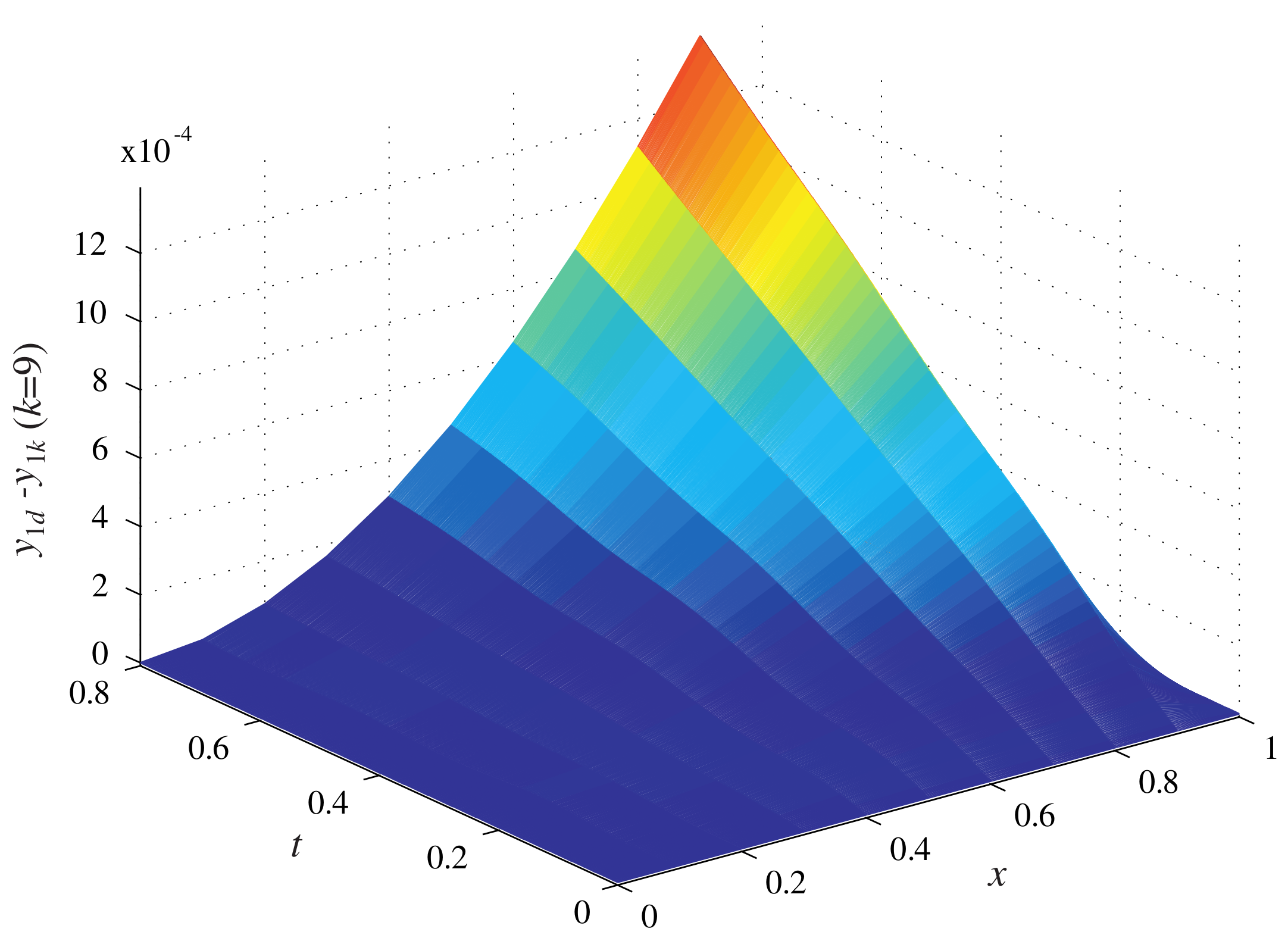 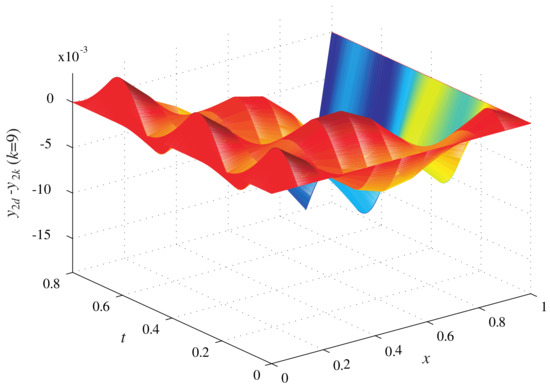 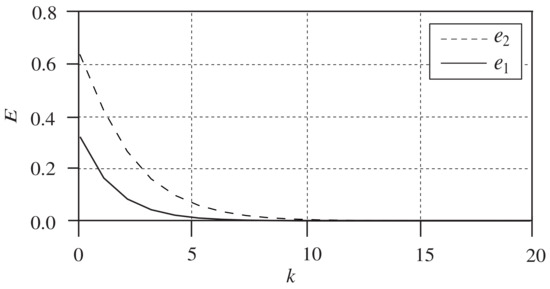 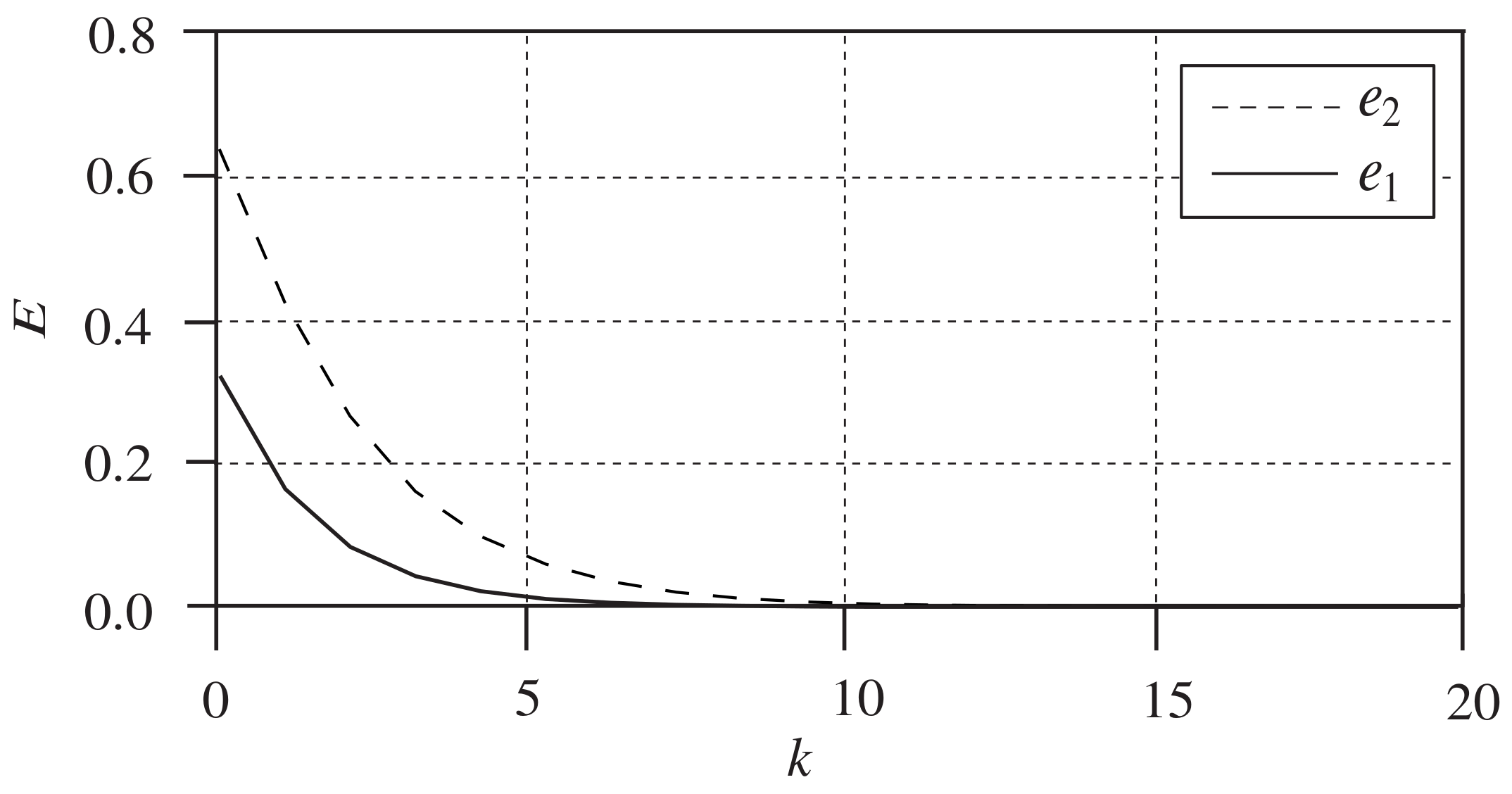 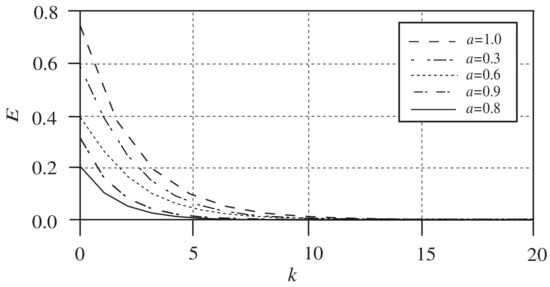 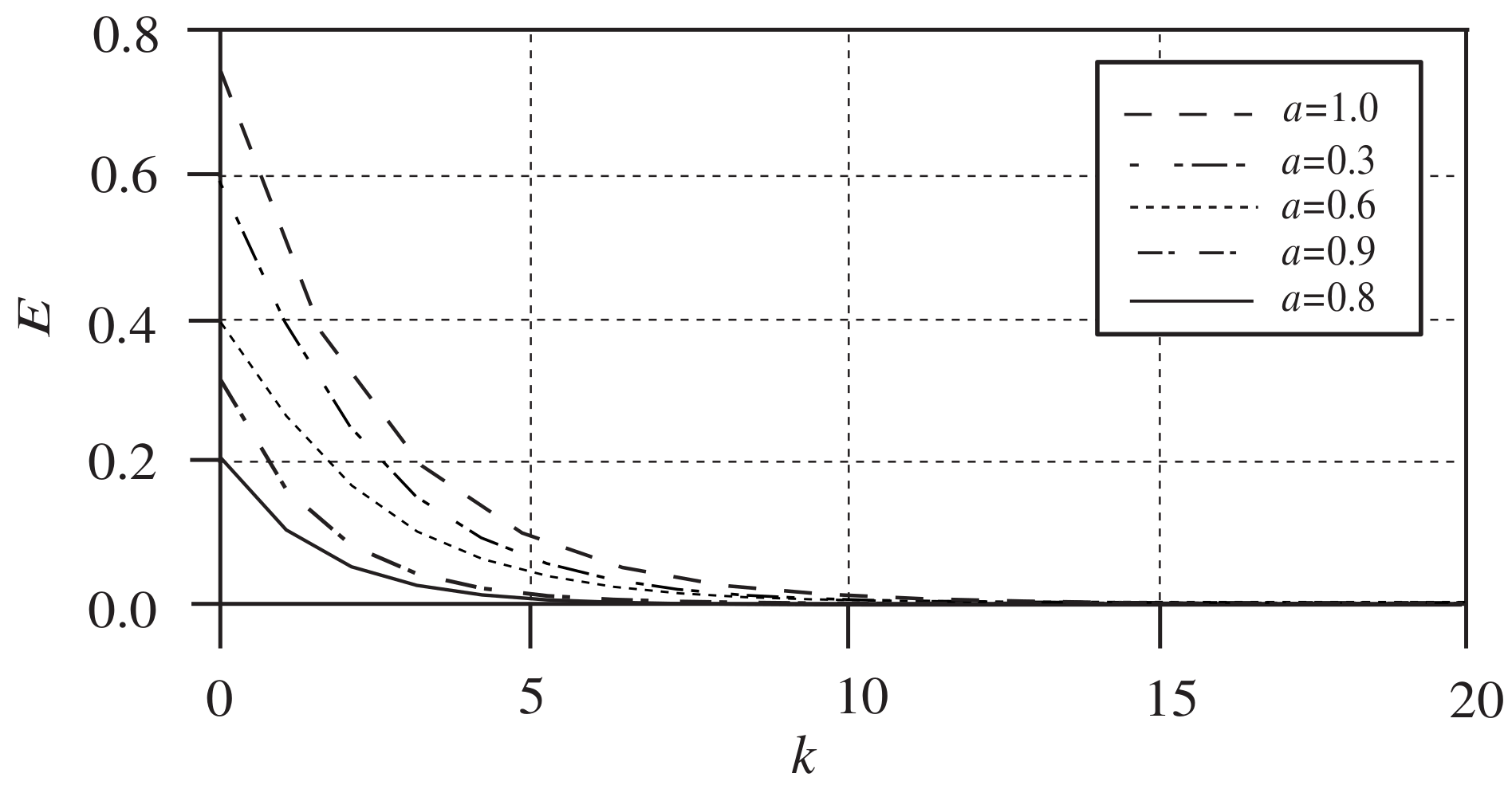