In this study, trypsin (Enzyme Comission 3.4.21.4) was immobilized in a low cost, lignocellulosic support (corn cob powder—CCP) with the goal of obtaining peptides with bioactive potential from cheese whey. The pretreated support was activated with glyoxyl groups, glutaraldehyde and IDA-glyoxyl. The immobilization yields of the derivatives were higher than 83%, and the retention of catalytic activity was higher than 74%. The trypsin-glyoxyl-CCP derivative was thermally stable at 65 °C, a value that was 1090-fold higher than that obtained with the free enzyme. The trypsin-IDA-glyoxyl-CCP and trypsin-glutaraldehyde-CCP derivatives had thermal stabilities that were 883- and five-fold higher, respectively, then those obtained with the free enzyme. In the batch experiments, trypsin-IDA-glyoxyl-CCP retained 91% of its activity and had a degree of hydrolysis of 12.49%, while the values for trypsin-glyoxyl-CCP were 87% and 15.46%, respectively. The stabilized derivative trypsin-glyoxyl-CCP was also tested in an upflow packed-bed reactor. The hydrodynamic characterization of this reactor was a plug flow pattern, and the kinetics of this system provided a relative activity of 3.04 ± 0.01 U·g−1 and an average degree of hydrolysis of 23%, which were suitable for the production of potentially bioactive peptides. View Full-Text
Keywords: corn cob powder functionalized; trypsin; immobilization; reactor; whey protein hydrolysates; peptides corn cob powder functionalized; trypsin; immobilization; reactor; whey protein hydrolysates; peptides
►▼ Show Figures 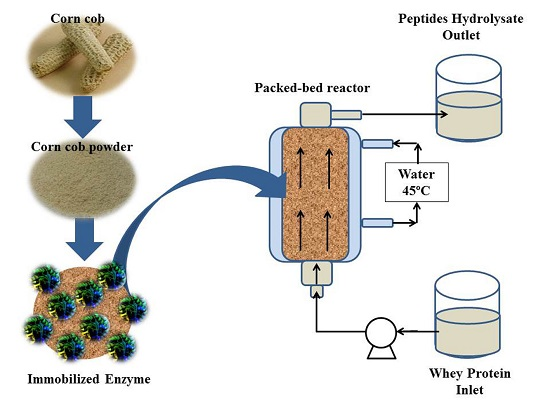