Poly(l-glutamate) (PGlu) was modified with a second-generation dendron to obtain the dendronized polyglutamate, P(Glu-D). Synthesized P(Glu-D) exhibited a degree of polymerization (DPn) of 46 and a 43% degree of dendronization. Perfect agreement was found between the P(Glu-D) expected structure and the results of nuclear magnetic resonance spectroscopy (NMR) and size-exclusion chromatography coupled to a multi-angle light-scattering detector (SEC-MALS) analysis. The PGlu precursor was modified by coupling with a bifunctional building block (N3-Pr-NH2) in the presence of 4-(4,6-dimethoxy-1,3,5-triazin-2-yl)-4-methylmorpholinium chloride (DMTMM) coupling reagent. The second-generation polyamide dendron was prepared by a stepwise procedure involving the coupling of propargylamine to the l-lysine carboxyl group, followed by attaching the protected 2,2-bis(methylol)propionic acid (bis-MPA) building block to the l-lysine amino groups. The hydroxyl groups of the resulting second-generation dendron were quantitatively deprotected under mild acidic conditions. The deprotected dendron with an acetylene focal group was coupled to the pendant azide groups of the modified linear copolypeptide, P(Glu-N3), in a Cu(I) catalyzed azide-alkyne cycloaddition reaction to form a 1,4-disubstituted triazole. The dendronization reaction proceeded quantitatively in 48 hours in aqueous medium as confirmed by 1H NMR and Fourier transform infrared spectroscopy (FT-IR) spectroscopy. View Full-Text
Keywords: dendronized polymer; poly(l-glutamate); bis-MPA; l-lysine; “click” reaction dendronized polymer; poly(l-glutamate); bis-MPA; l-lysine; “click” reaction
►▼ Show Figures 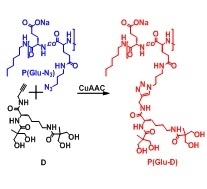