In the present paper, numerical analysis of aluminum honeycombs was carried out using ANSYS/LS-DYNA [16]. Two types of honeycombs, differing in cell size and cell wall thickness, were simulated. The honeycombs are named as H31 and H42 for honeycombs 3.1-3/16-5052-.001N, 4.2-3/8-5052-.003N, respectively. The specifications of the honeycombs, provided by the manufacturer, are listed in Table 1. The dimensions of each honeycomb model are the same as those of the actual specimen used in the previous experiments [7]. The height of all honeycombs, h, was 50 mm. The in-plane dimensions of all honeycomb specimens were 180 mm × 180 mm in indentation simulation (Figure 1a) and 90 mm × 90 mm in compression simulation (Figure 1b).
Aluminum honeycomb walls were simulated using a bilinear kinematic hardening material model. The corresponding material properties are listed in Table 2. Belytschko-Tsay Shell 163 elements with five integration points were employed to simulate the honeycomb cell walls for high computational efficiency [19]. In each honeycomb cell, single wall thickness was employed for the four oblique walls and double wall thickness was employed for the two vertical walls. To identify the optimum element size, a convergence test was carried out. Five different element sizes—2.1 mm, 1.4 mm, 0.7 mm, 0.3 mm, and 0.15 mm—were used to simulate compression of honeycombs at 5 ms−1. No significant difference (less than 7%) was observed between the results for element sizes 0.7 mm and 0.15 mm. Therefore, in this FE analysis of aluminum honeycombs an element size of 0.7 mm was employed. Since tearing of cell walls happened in honeycombs under indentation, MAT_ADD_EROSION failure criterion with a maximum effective strain of 0.3 [21] was used in the indentation models. All degrees of freedom of one node at a corner of the honeycomb were fixed to keep the honeycomb in place (i.e., no rigid body movement).
In physical experiments, honeycomb specimens were placed on a fixed lower plate and crushed by an upper plate (in compression) or indenter (in indentation). In FE models, the lower plate was simulated by a rigid plate while the upper plate and indenter were simulated by rigid bodies. The lower plate was 1 mm (thickness) × 200 mm × 200 mm. The upper plate and indenter were cuboids with dimensions of 50 mm (height) × 90 mm × 90 mm, the same as in the previous experimental study [7]. The material properties used for the plates and indenter are listed in Table 3.
For the lower plate, all degrees of freedom were fixed. For the upper plate (in compression) and indenter (in indentation), all three rotational movements and two transitional movements in the X and Z directions were fixed. The upper plate or indenter could move in the negative Y direction at a constant velocity to compress or indent honeycombs.
A tiny gap (0.1 mm) between the fixed lower plate and the honeycomb was employed to avoid the initial penetration at the beginning of the simulation. For the same reason, an initial gap of 5 mm was also introduced between the upper plate or the indenter and the honeycomb. SURFACE_TO_SURFACE contacts were employed between the plates or indenter and honeycomb. Typical finite element models of indentation and compression of honeycombs in the out-of-plane direction are shown in Figure 1.

FEA and experimental stress–strain curves of two types of honeycombs are shown in Figure 4. Similar general trends in the stress-strain curves were found for both honeycombs in indentation and compression.
The plateau stress is defined as the average stress between displacements from 5 to 38 mm. The total dissipated energy is the area under the force-displacement curves up to 38 mm, which is described by EC in compression and EI in indentation. Tearing of the cell walls along the four edges of the square indenter occurred simultaneously during the indentation. Tearing energy, Et, was calculated using the following energy conservation equation:
Et = EI − EC
where, Et is the dissipated energy in tearing; EI is the energy dissipated in indentation; and EC is the energy dissipated in compression.
Comparisons between the FEA and experimental results in terms of plateau stress and dissipated energy are listed in Table 4. For two different types of honeycombs (H31 and H42), the simulated plateau stresses and total dissipated energies were found to be slightly lower than the corresponding experimental values in both indentation and compression. The differences were between 4.71% and 11.62%, which was acceptable.

The effect of t/l ratio on the mechanical properties of honeycombs is discussed in this section. Firstly, the thickness of honeycomb cell walls was fixed as 0.0254 mm. Five different cell sizes—3.175 mm, 3.969 mm, 4.763 mm, 6.35 mm, and 9.525 mm—were employed. A constant strain rate of 1 × 103 s−1 was used in the simulation. The FEA results are listed in Table 5. Both in indentation and compression, it was found that the plateau stress decreased with the increase of cell size for a constant cell wall thickness. Similar to the plateau stress, dissipated energy and tearing energy also decreased with the increase of cell size.
Secondly, honeycomb cell size, D, was kept constant at 4.763 mm (the corresponding cell edge length was 2.75 mm). The thickness of the cell wall varied from 0.0178 to 0.1524 mm, where the corresponding t/l ratios were from 0.00647 to 0.05542. The simulation results at a constant strain rate of 1 × 103 s−1 are listed in Table 6.
The plateau stresses of honeycombs subjected to out-of-plane compression and indentation were found to increase with t/l ratio (Figure 5) by power laws. The exponents are 1.47 for compression (Equation (2a)) and 1.36 for indentation (Equation (2b)). Xu et al. [6,19] also found a similar power law relation between plateau stress and t/l ratio with an exponent of 1.49.
For compression,
For indentation,
The tearing energies were calculated using Equation (1) and are shown in Table 5 and Table 6. Tearing energy was also found to increase with the t/l ratio. The fracture area, At, was calculated as the product of the circumferential length of the square shape indenter (90 mm × 4) and the displacement (38 mm) of the indenter [3]. The relationship between the tearing energy per fracture area, At, and the relative density, , is shown in Figure 6. It was found that with the increase of t/l ratio or relative density, the tearing energy per unit fracture area increased.
Previously, Zhou and Mayer [3] and Ashab et al. [7] conducted quasi-static indentation tests on different honeycombs. Moreover, other researchers [22,23,24] conducted quasi-static indentation tests on aluminum foams. Shi et al. [22] proposed a theoretical formula and an empirical formula between tearing energy per unit fracture area and relative density. In order to compare these two types of cellular materials (honeycomb and foam, which are made from different aluminum alloys), tearing energy per unit fracture area was normalized by the yield stress of the parent aluminum alloy for both honeycombs and foams. The relationship between the normalized tearing energy per unit fracture area and relative density is shown in Figure 7. Using yield stress σys = 150 MPa for the foams in Shi et al. [22], Olurin et al. [23], and Olurin et al. [24], the equation proposed by Shi et al. [22], , can be rewritten as , where , and are tearing energy per unit area, yield stress of aluminum, and relative density of foam, respectively. The normalized tearing energy per unit fracture area for both aluminum foams and honeycombs are plotted together in terms of relative density in Figure 7. The equation of the best fitted line is as follows, which is very similar to that for foams:

4.3. Deformation Pattern of Aluminum Honeycombs Subjected to Compression and Indentation

Figure 13 shows the enlarged isometric and front (sectional plane) views of honeycombs H31 under out-of-plane indentation and compression loads. Three images of deformation were taken at a displacement of 0 mm, 20 mm, and 40 mm, respectively, from the animation of FEA by using LS-Prepost software [31]. In Figure 13a it is seen that the progressive buckling of the cell wall occurs from both ends of the honeycomb simultaneously and propagates to the middle region of the honeycomb, which is similar to that observed in the previous experimental study [7]. Deformation mode is found to be independent of strain rate. Xu et al. [6] also observed a negligible effect of strain rate on the buckling of honeycomb cells in the out-of-plane compression.
In the previous experimental study, it was impossible to observe the deformation of honeycomb under the indenter. In the current FEA, the deformation of honeycomb in indentation is observed from the front sectional plane view, as shown in Figure 13b. It is found that the progressive buckling of cell walls initiates from the top end of the honeycomb, which is immediately beneath the indenter, and propagates in the same manner till densification. Progressive buckling takes place in the middle portion of the honeycomb model underneath the indenter, which is associated with the tearing of cell walls along the four edges of the indenter. No significant difference is observed in the buckling pattern at different strain rates.

A.S.M. Ayman Ashab is grateful for the financial support provided by Swinburne University of Technology, Victoria, Australia through a postgraduate research scholarship. The authors are thankful to Shanqing Xu for his help and Leap Australia for the technical support of ANSYS/LS-DYNA. 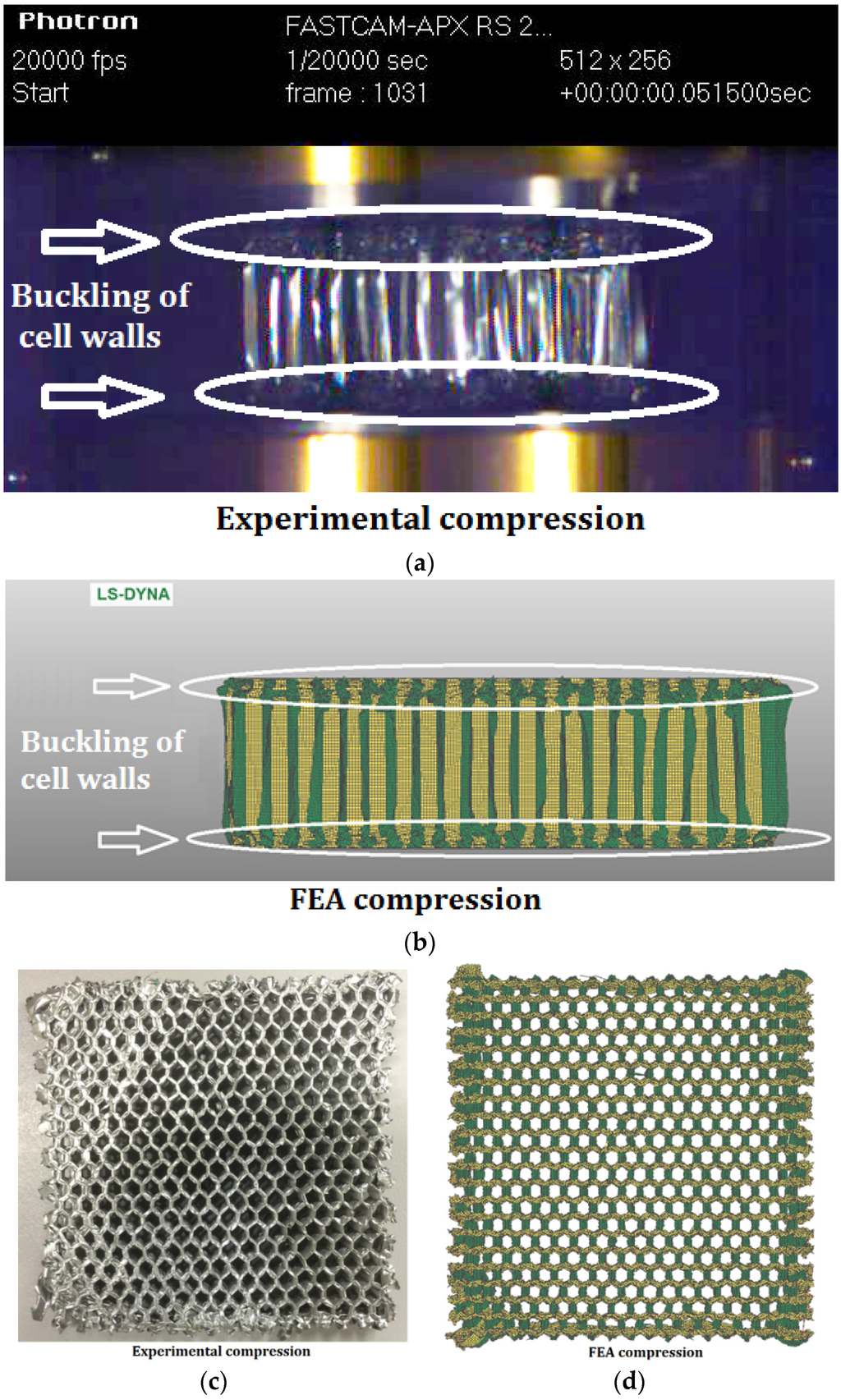 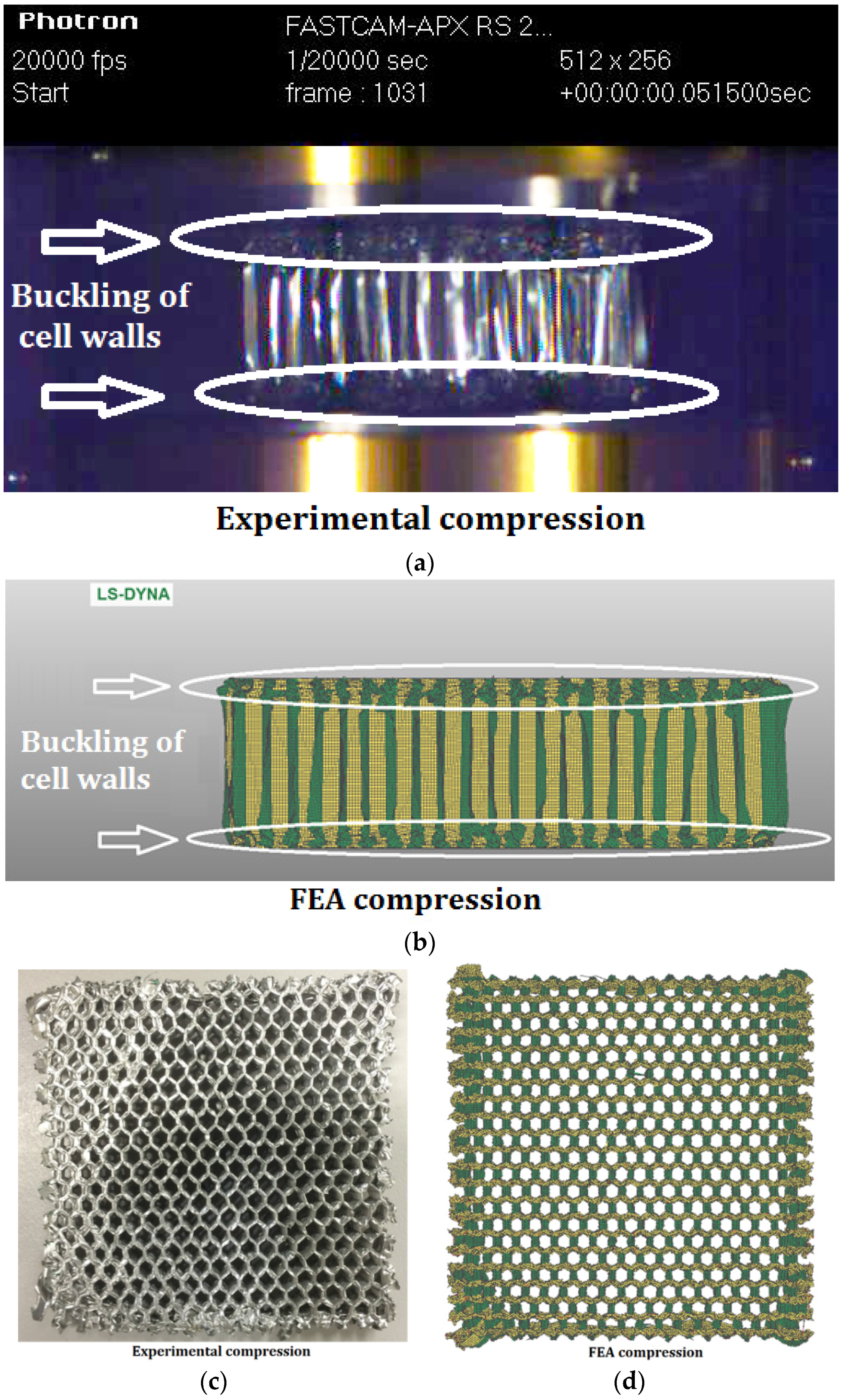 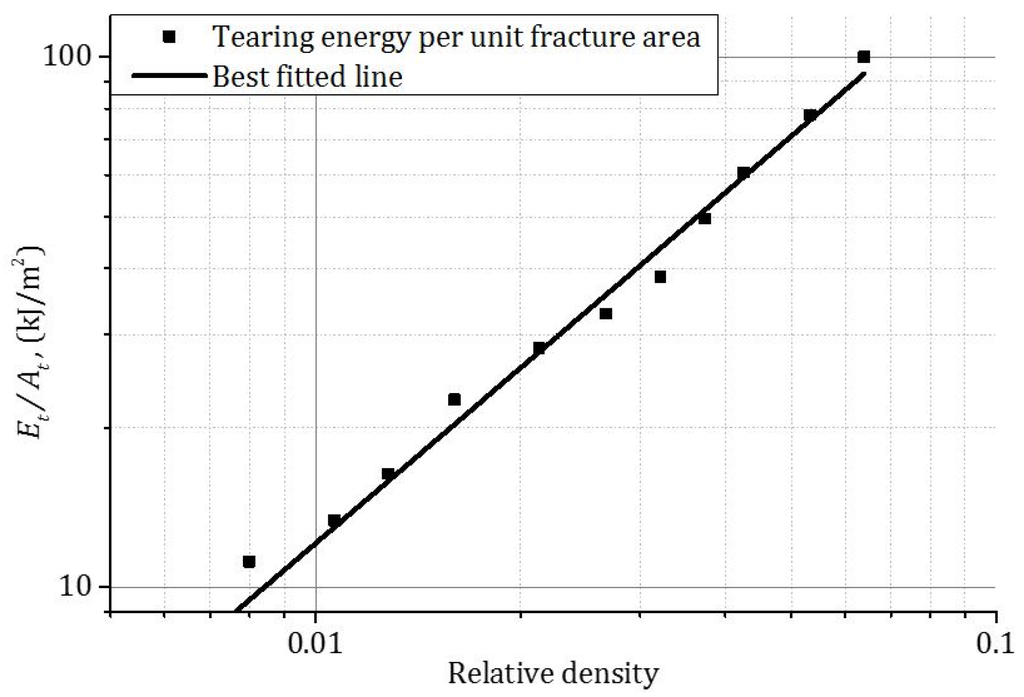 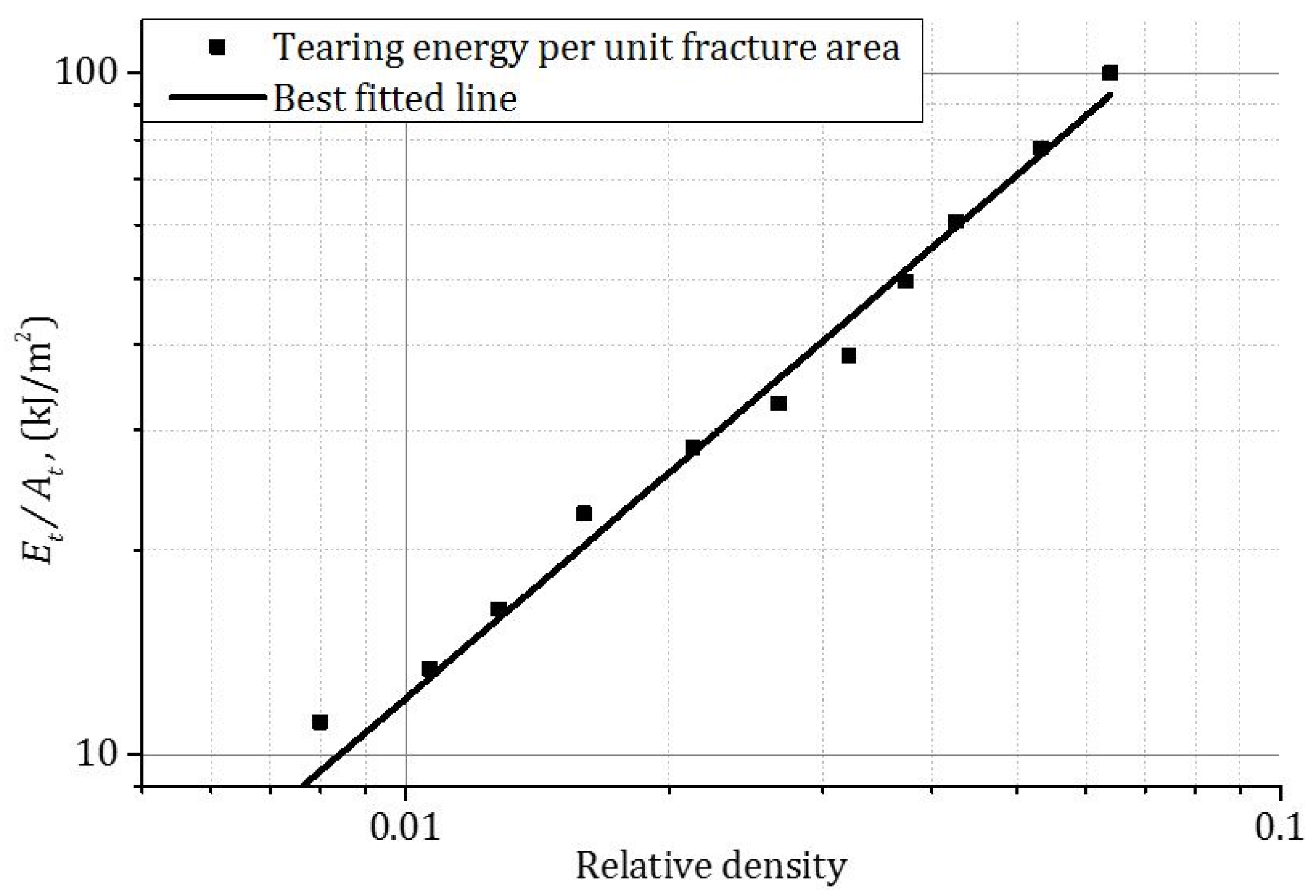 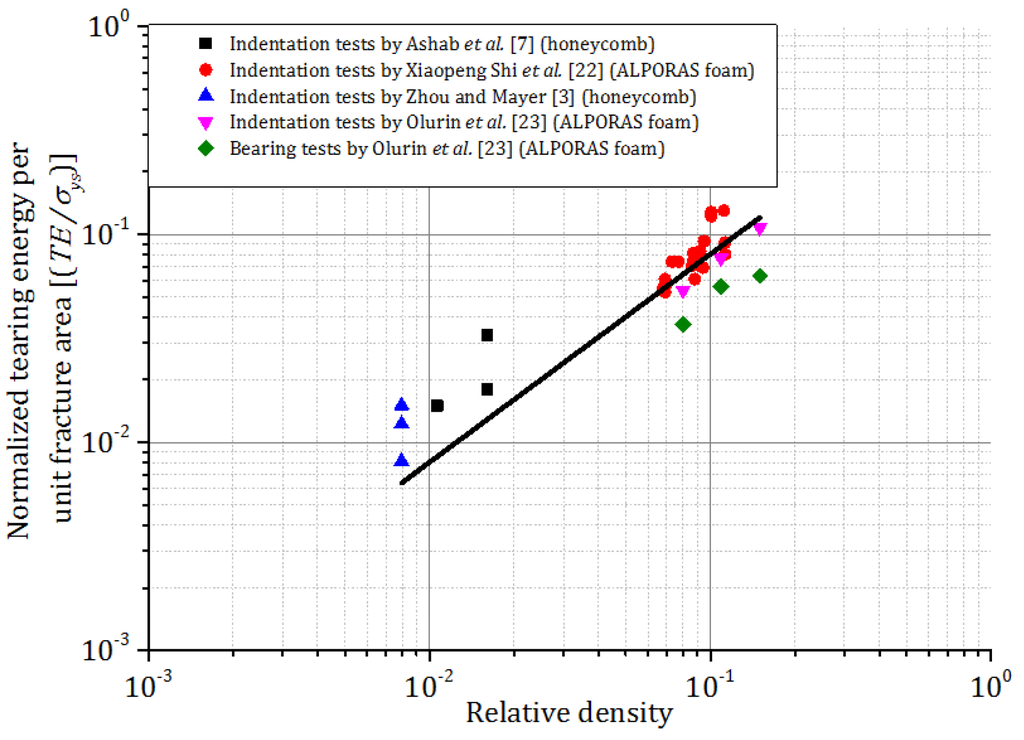 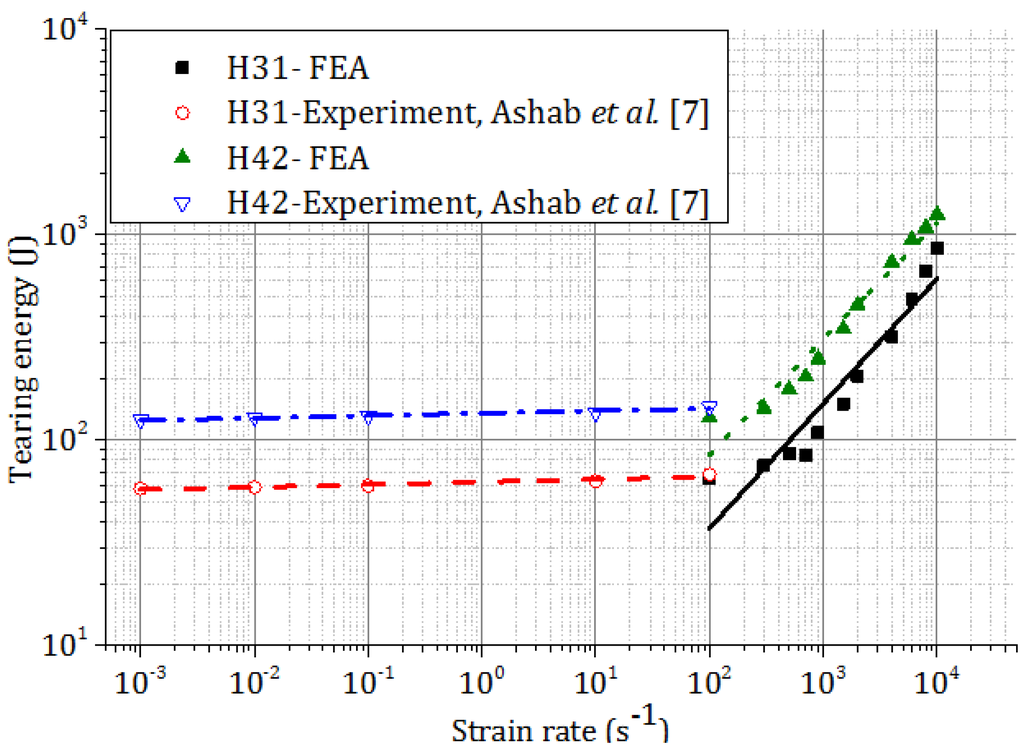 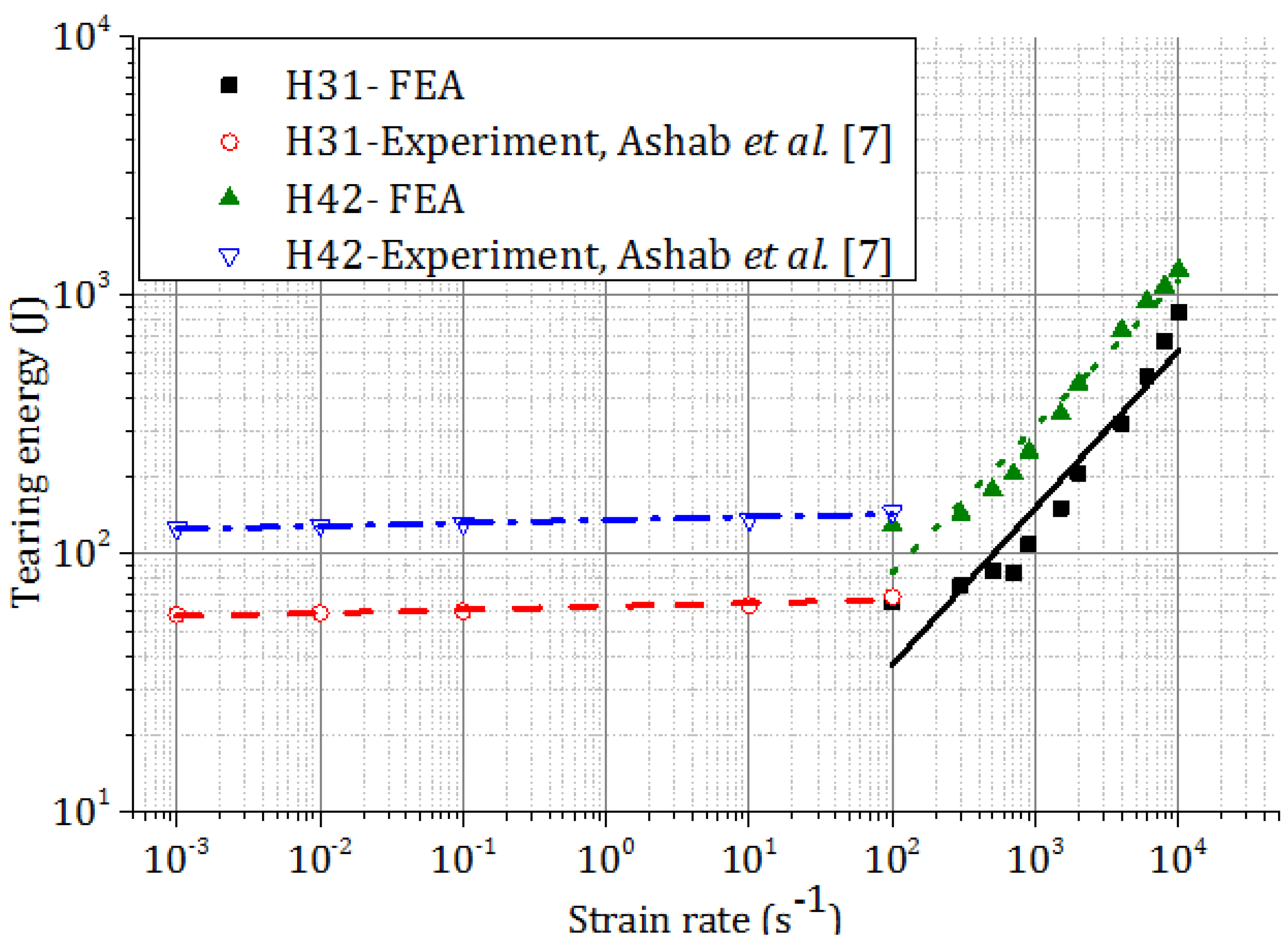 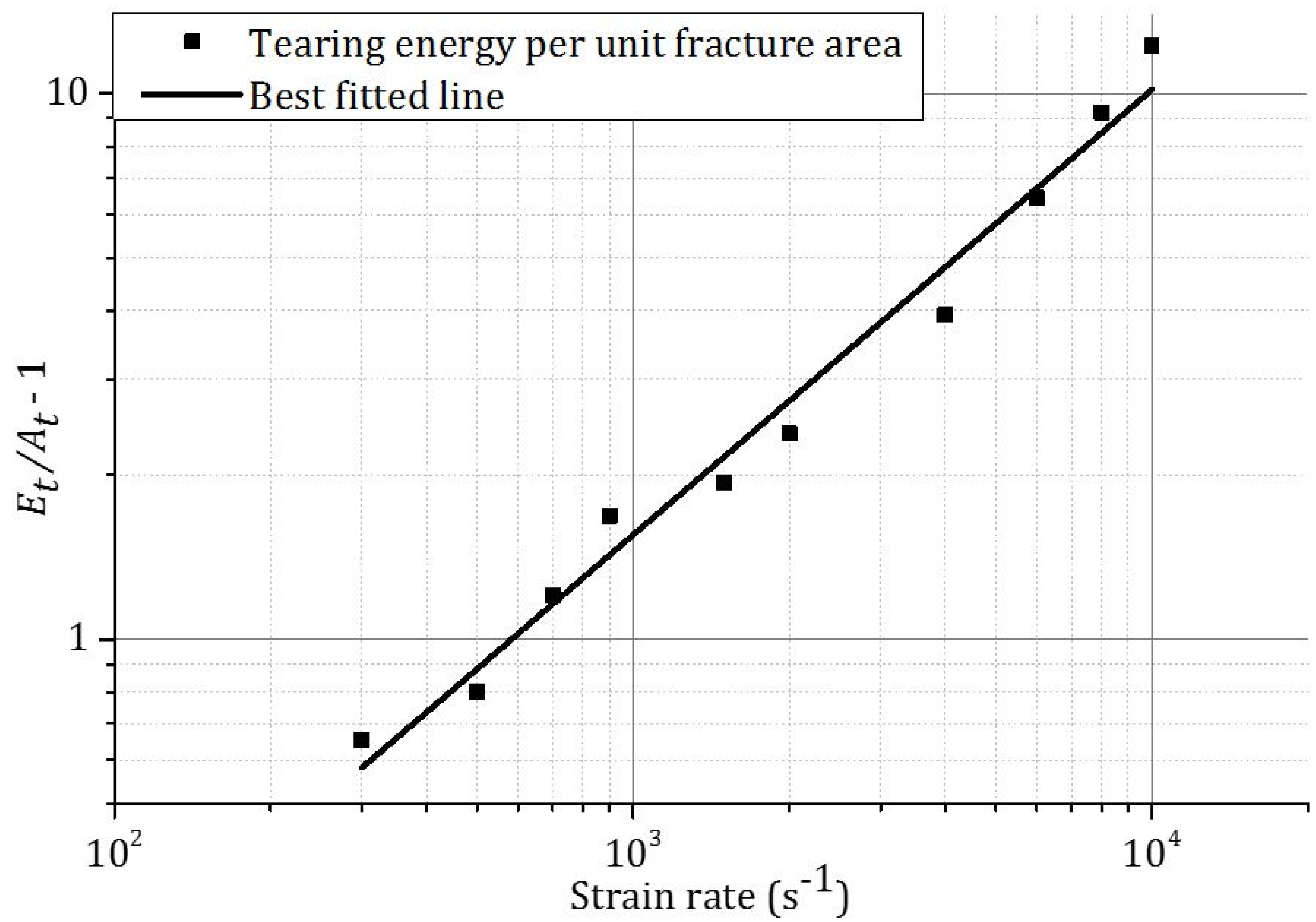 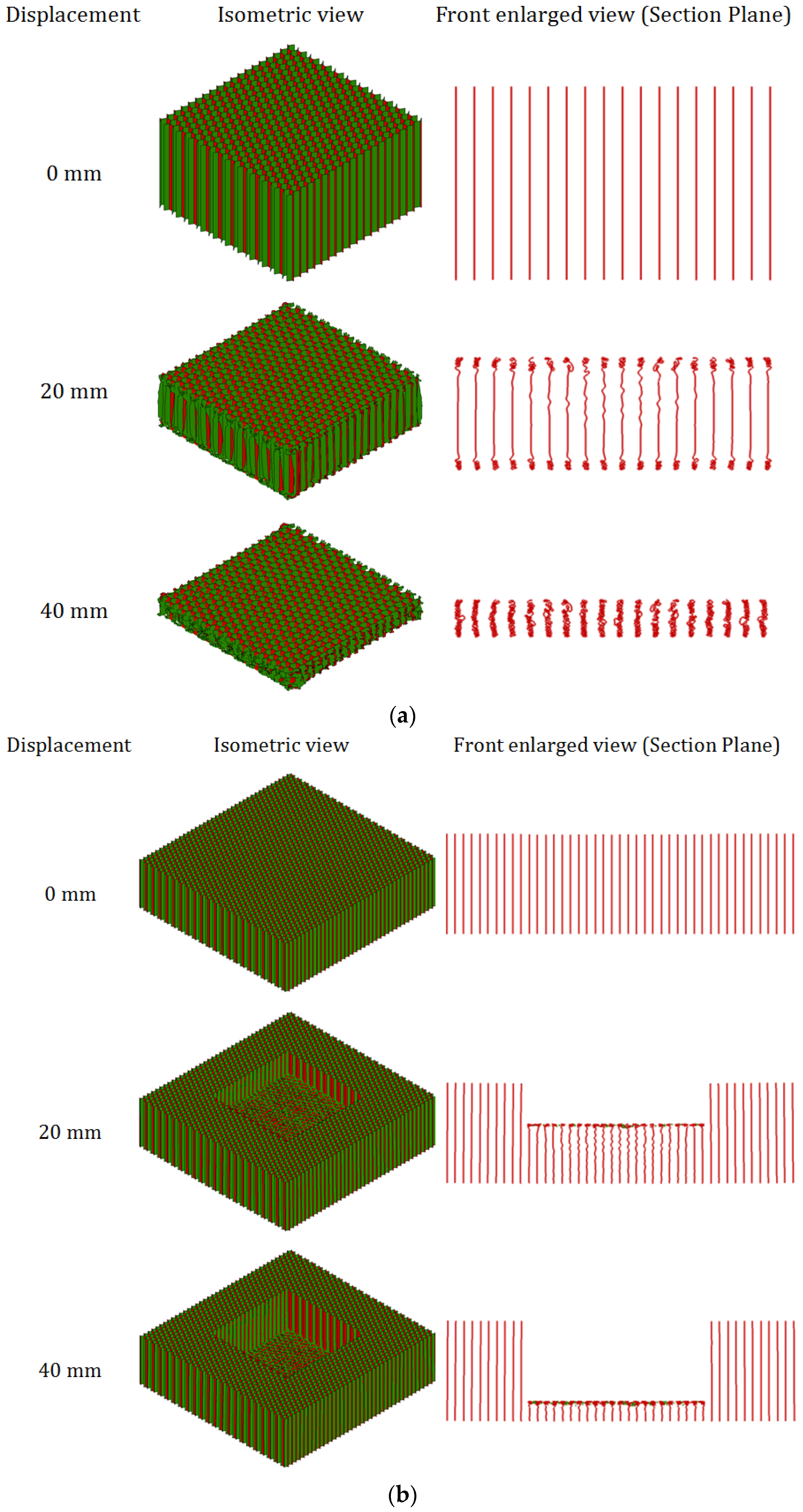 Table 1. Specification of aluminum honeycombs [20].
* In the material description, 3.1 and 4.2 are the nominal densities in pounds per cubic foot, 3/16 and 3/8 are the cell size in inches, 5052 is the aluminum alloy grade, 0.001 or 0.003 is the nominal foil thickness in inches, and N denotes non-perforated cell walls. Data were provided by the manufacturer, HEXCEL® (Stamford, CT, USA). The relation between cell size, D end cell edge length, l is: D = √3l.

Table 3. Material properties used in the FE model of rigid plate and bodies [19].

Table 4. Comparison between FEA and experimental results at 5 ms−1.