Vacuum-induced surface freezing has been used to produce uni-directional freezing of colloidal aluminum oxide dispersions. It leads to zones of different structure within the resulting sintered monoliths that are highly similar to those known for freeze casting using a cryogen cold source. A more-or-less dense surface layer and a cellular sub-surface region are formed, beneath which is a middle region of aligned lamellae and pores that stretches through most of the depth of the monolith. This is the case even at a volume fraction of dispersed phase as low as 0.032. A more-dense but still porous base layer is formed by accumulation of rejected nanoparticles preceding the freezing front and differs from previous reports in that no ice lenses are observed. X-ray micro-computed tomography reveals a uniform aligned pore structure vertically through the monolith. The pores close to the periphery are oriented radially or as chords, while the center region contains domains of parallel pores/lamellae. The domains are randomly oriented to one another, as already reported for regular freeze casting. This technique for directional freezing is convenient and easy to perform, but requires further refinement in that the temperature gradient and freezing rates remain yet to be measured. Also, control of the temperature gradient by varying chamber vacuum and shelf temperature needs to be evaluated. View Full-Text
Keywords: directional freezing; surface freezing; vacuum; aligned pores; alumina; sinter directional freezing; surface freezing; vacuum; aligned pores; alumina; sinter
►▼ Show Figures 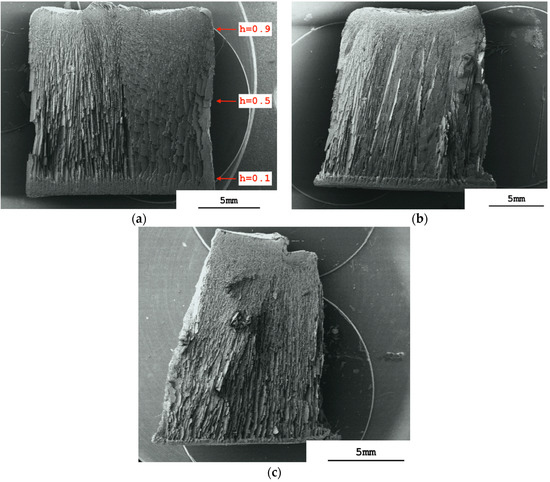