We propose a simple and low-cost process for the preparation of porous Ti foams through a sponge replication method using single-step air sintering at various temperatures. In this study, the apatite-forming ability of air-sintered Ti samples after 21 days of immersion in simulated body fluid (SBF) was investigated. The microstructures of the prepared Ca–P deposits were examined by X-ray diffraction (XRD), field-emission scanning electron microscopy (FE-SEM), Fourier transform infrared (FTIR) spectroscopy, and cross-sectional transmission electron microscopy (TEM). In contrast to the control sample sintered in vacuum, which was found to have the simple hexagonal α-Ti phase, the air-sintered samples contained only the rutile phase. High intensities of XRD peaks for rutile TiO2 were obtained with samples sintered at 1000 °C. Moreover, the air-sintered Ti samples had a greater apatite-forming ability than that of the Ti sample sintered in vacuum. Ti samples sintered at 900 and 1000 °C had large aggregated spheroidal particles on their surfaces after immersion in SBF for 21 days. Combined XRD, energy-dispersive X-ray spectroscopy, FTIR spectroscopy, and TEM results suggest that the calcium phosphate deposited on the rutile TiO2 surfaces consist of carbonated calcium-deficient hydroxyapatite instead of octacalcium phosphate. View Full-Text
Keywords: titanium foam; microstructure; bioactive; hydroxyapatite; simulated body fluid (SBF) titanium foam; microstructure; bioactive; hydroxyapatite; simulated body fluid (SBF)
►▼ Show Figures 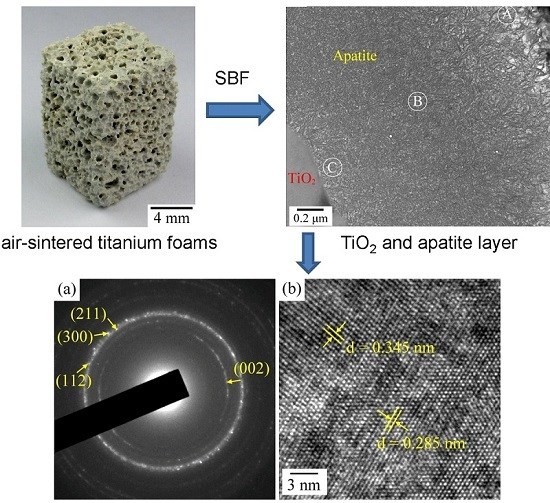